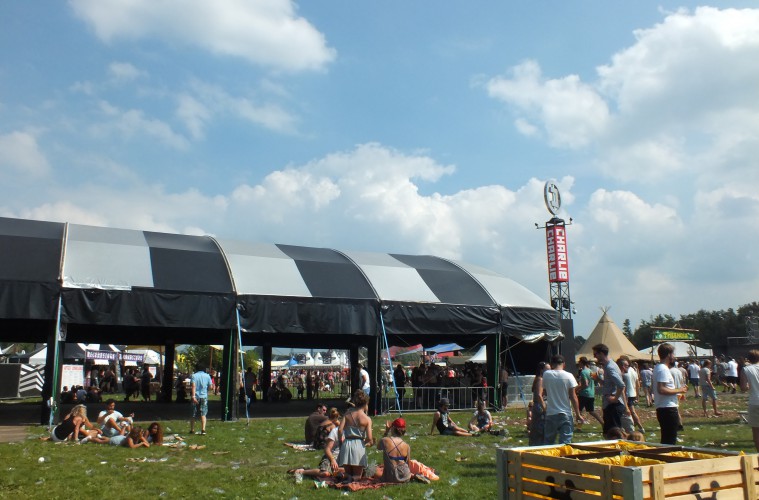 We’ve all been there before: deciding on which festival to buy a ticket for. There’s always an abundance of factors involved in choosing a festival; the line-up, location and overall cost amongst them. Dutch festival A Campingflight to Lowlands Paradise (commonly known as Lowlands, or #LL16 amongst the hashtag generation) is a weekender which has it all: intricate line-ups ranging from music to performance art, a conveniently attractive location and your definite money’s worth in all other applicable areas. We scoured through the line-up section by section to discover exactly why Lowlands should call itself Holland’s best festival.

First and foremost, Lowlands pulls the big names. It may not land the likes of Paul McCartney or the Stones, but the Biddinghuizen bash still manages to snag acts like this year’s big headliner, Muse. The Teignmouth-trio are heading up Lowlands for the first time, marking the festival’s biggest booking since Foo Fighters ripped up the Alpha tent in 2012. Joining the space rock heroes atop the bill are house brothers Disclosure and electro rock revivalists LCD Soundsystem, who are currently touring an extended reunion victory lap. Whether or not the latter two headliners are actually worthy of topping a Dutch bill remains to be seen, however Disclosure do have one leg-up following their tent-filling set in 2014. Lowlands’ biggest names extend further than the three headliners, though. Across seven spacious tents you’ll find acts of a massive calibre, such as sub-headliners The Last Shadow Puppets, Sigur Ros and Noel Gallagher’s High Flying Birds (below). The three subs alone are bigger than last year’s headliner trio combined (Ben Howard, The Chemical Brothers and Major Lazer), which says a lot about the increase in quality which Mojo (Lowlands’ organizers) have made for this year. Last year saw many people question Lowlands’ credibility and position within the Dutch festival market, in particular due to the fact that it ended up being nowhere near sold out. The festival hasn’t sold out yet this year either, but it’s looking like it might end up faring much better than in 2015. Further big names which Lowlands has booked this year include sweaty stadium rockers Biffy Clyro, mellow electro crooner James Blake and binary sad boys The Neighbourhood, all three of whom make up a miniscule part of Lowlands’ wide musical palette. The Biddinghuizen bash may not pull the cream of the musical legends crop (see the aforementioned Stones and former Beatle), but they do know how to book names huge enough to sell out in an intimate setting. Secondly, Lowlands knows how to cater for all audiences. It’s not a rock festival, nor is it a dance/pop festival. It’s a festival for everyone from all walks of life, something which is evident following just one scan of the entire line-up. If you’re a lover of massive melodies and huge pop anthems, then acts like CHVRCHES, AlunaGeorge and BØRNS are on hand to provide you with what you need. If you’re into constructing your own circle pit from scratch and leaving it battered and bruised an hour later, then Biddinghuizen is able to offer you caterwauling sets from Frank Carter & the Rattlesnakes, Parkway Drive and Sum 41. It doesn’t just end there, though. Into hip-hop? Then Anderson .Paak, Travi$ Scott and Tiggs Da Author are the ones for you. Into obscure electronic acts? Then don’t hesitate in checking out The Avalanches’ huge reunion show. Into psychedelia and all things Pitchfork? Then we recommend you don’t miss Whitney, Thee Oh Sees or King Gizzard & the Lizard Wizard. Hell, Lowlands even has the ability to pull jazz’s finest modern legend Kamasi Washington to its grounds, as well as the likes of trippy collective Pumarosa, Arabic wizard Islam Chipsy and party-starters Espana Circo Este, all of whom are acts you wouldn’t consider booking or checking out at first glance. You can’t go wrong in Biddinghuizen when it comes to finding something that suits your tastes. Whether you like your rock raw, sweaty and a little funky (like Eagles of Death Metal or Foals, below) or fancy your singer-songwriters bathed in dry ice and white lights (hi there, Aurora), then don’t even hesitate and just buy a ticket. It doesn’t even stop once the headliner ends; instead, Lowlands carries on well into the night with an abundance of afterparties and DJ sets. It must be your money’s worth, surely? Finally, Lowlands knows how to not only book the real deal, but also how to look the real deal. The festival site is made up of seven colourful tents, all of which are named after letters of the NATO Alphabet. The Alpha tent, Lowlands’ main stage, is where you’ll find the biggest acts Biddinghuizen has to offer, with the likes of Volbeat and The Chemical Brothers previously taking to the stage there. On the other side of the festival site, you’ll find the Heineken tent (the second biggest stage). This is where you’ll find huge alternative acts (of all genres) who are either better in the dark or just not big enough for the Alpha stage. Such examples are Tame Impala and Bring Me the Horizon, both of whom appeared in the last couple of years alongside the likes of Enter Shikari, Milky Chance, Janelle Monae and Twenty One Pilots. The Heineken tent is a whole mish-mash of genres and acts, much unlike the electro-centric Bravo and indie-focussed India, both of which saw sets last year from Diplo and Father John Misty respectively. If you’re in need of a mind-blowing new discovery, then the Charlie tent is the place to be; it’s the only place where you can wake up to a brutal set from While She Sleeps before later being blown away by Fuzz or Pond. Lowlands’ seventh stage is the Lima area, which is the only open air stage onsite. Last year, it played host to a spellbinding My Baby show, something which Espana Circo Este will also hope to do in August. Regardless of what happens, though, it’s sure to be Lowlands’ biggest diamond in the rough; a stage which isn’t completely there yet in terms of end result, but one which is still one worth checking out. In fact, Lowlands itself is a diamond in the rough. The festival is by no means perfect, but then again nothing is. If you’re still not sure about buying a ticket, then find more information here.

Like the sound of the acts we mentioned above? Then take a listen to our personally constructed Lowlands playlist below!