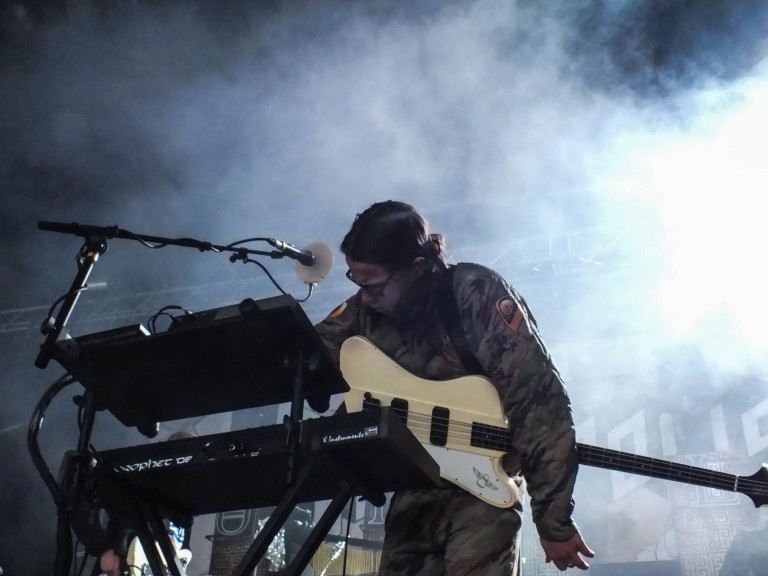 As January careers towards February at record speed, it’s time to look at 12 releases which we can’t wait to hear in 2016

12. Breton – TBA
We can’t say much about Breton’s new album, to be honest. We do know for a fact that it will come out this year, though, but the band have remained very tight lipped to the outside world about the rest of the process. 11. Asking Alexandria – The Black
Following Danny Worsnop’s depature nearly a year ago, Asking Alexandria have powered on forward with new frontman Denis Stoff. 2015 was spent touring heavily, including a sting on the Vans Warped Tour alongside two separate European jaunts. In and amongst all of this, the band spent a lot of time working on upcoming studio album The Black. Described as an album which goes back to the band’s metalcore roots, The Black will come out in March.

10. Red Hot Chili Peppers – TBA
As is the case with a few albums on this list, we don’t know what they’re titled or when they’re coming out. However, we do know for a fact that Red Hot Chili Peppers will finally be releasing their first studio album since 2011. We don’t know much about the record, but we can expect to hear plenty of it across Europe as the quartet prepare to tour through our continent’s finest festivals, Pinkpop and Rock Werchter amongst them. 9. Pierce the Veil – TBA
Although we were initially led to believe that Pierce the Veil would release their fourth studio album last year, conflicting evidence and various delays have ultimately confirmed that Vic Fuentes and co. will release a new record this year. Standalone single The Divine Zero came out last summer, hinting towards the possibility that Pierce the Veil will go back to their heavier roots. We know nothing much about the record at this point, only that we can expect it this year. 7. Kasabian – TBA
Leicester heavyweights Kasabian’s last album, the thrilling 48:13, is going to be hard to top if the band decide to release its follow-up this year. It was the album which saw them tour huge venues and headline Glastonbury, meaning that Kasabian’s next album can only see them go bigger and better. Will they do that? Undoubtedly. And will it be one of the best things we hear this year? For sure. 6. Jungle – TBA
RnB funk duo Jungle came out of nowhere towards the back-end of 2013 when they released a fantastic selection of anonymous singles. The resulting studio album which followed in the summer of 2014 was nothing short of a spectacular, groove-laden journey. It was the soundtrack of the summer for many, and it looks like 2016’s supposed follow-up can only see Josh and Tom get bigger and better. 5. Temples – TBA
Psychedelic quartet Temples have spent a long time working on the follow-up to 2014 debut album Sun Structures. Having played a handful of festivals last year, the Kettering quartet took the chance to premiere two new songs – Volcano / Saviour and Henry’s Cake. Both songs follow the same trend which made Temples so popular two years ago, meaning that their second album could not come sooner. 4. The Growlers – TBA
Hippie surfers and Beach Goth enthusiasts The Growlers recently confirmed that they’ll be releasing the follow-up to 2014’s Chinese Fountain later this year. Brooks Nielsen and his band had an absolutely exhausting 2015, and we’re very excited to hear what sounds the outfit conjure up this time round. Whatever they do, it’ll undoubtedly be fresh, exciting and true to everything The Growlers have always done. 3. Of Mice & Men – TBA
Last week, we confirmed to you that Of Mice & Men would be releasing a brand new album in 2016. The band, fronted by Austin Carlile, last released an album in 2014 when they put out the fresh Restoring Force (it was subsequently re-issued a year later). Bassist Aaron Pauley recently revealed that the band would release the record this year, as well confirming news of a huge world tour. They haven’t indicated in which direction they’ll be going this time, however we can expect that it will be another chapter in Of Mice’s evolution. 2. Biffy Clyro – TBA
Biffy Clyro are without a doubt one of the biggest bands in the world right now. Following 2013’s huge double album Opposites, the band have been touring relentlessly and working hard on its 2016-bound follow-up. There’s been talk of the band going back to their roots, something which was further confirmed when they performed new track On a Bang at the end of last year (below). When the album does come out, you can expect it to further solidify Biffy’s status as absolutely monumental.

1. Radiohead – TBA
Will they or won’t they? That’s one question which has loomed over Radiohead ever since they released 2011’s The King of Limbs at short notice. There’s been talk of another surprise release (the band recently registered another new distribution company, Dawn Chorus), especially considering the shock surprise fans were met with when Thom Yorke and co. put out the swirling Spectre. The track, almost selected as the most recent James Bond theme, may indicate a more orchestral direction for the new record, however with Radiohead you simply just never know. Whatever happens, though, it looks set to be one of the most exciting records of the year.