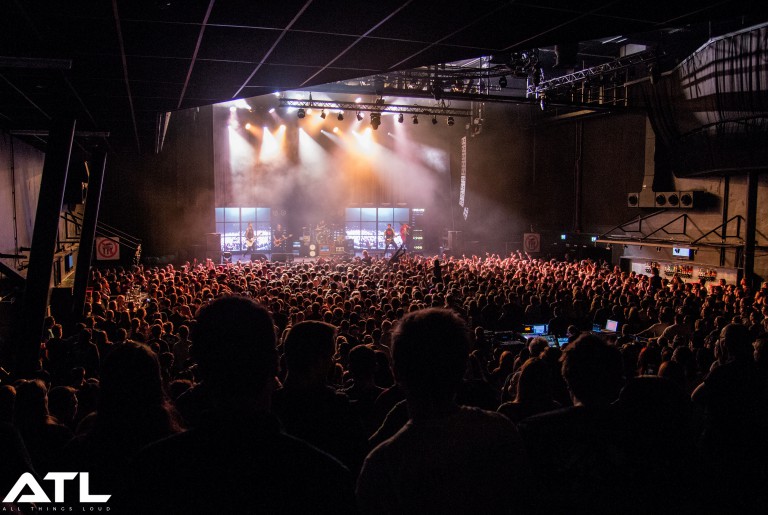 A Day to Remember in Tilburg: They’re Still Here, And They’re Stronger Than Ever

If there’s one band who have managed to outlive all the fads which the current alternative music climate employs and subsequently disposes of, then it’s A Day to Remember. Emerging onto the scene nearly ten years ago, Jeremy McKinnon and co. have managed to churn out a consistent collection of tracks which showcase their unorthodox take on pop-punk infused metalcore. But how have they managed to last so long in a scene which picks the latest trend as soon as Alternative Press puts it up on bookstore shelves? Simple: by sticking to the same formula record-upon-record and only deviating course ever so slightly.

Had A Day to Remember gone for either pop-punk or metalcore, you’d be guaranteed that McKinnon and his compatriots wouldn’t be as widely recognized as they are now. Maybe a smaller cult following, but still. Having started off playing a relentless amount of live shows, the quintet slowly but surely grew into a well-oiled machine which has (as of now) racked up tours across the globe in venues thrice the size of their next of kin. They most notably sold out Wembley Arena this year on their huge UK tour, and they’re currently causing similar chaos on European soil. Last night, band took to a far from sold-out 013 in Tilburg together with special guests Neck Deep and Moose Blood. The show was the last one on their ongoing European tour, which saw compatriots New Found Glory join them for the UK arena leg. Both special guests have the potential to one day be as big as A Day to Remember, and if anything proved this then it was seeing all three of them share the same stage in Tilburg. Wrexham pop-punkers Neck Deep are no strangers to big stages, having toured the world non-stop since the release of sophomore record Life’s Not Out to Get You. Frontman Ben Barlow never fails to impress as he and his bandmates bound energetically about the stage, with their energy being complemented by opener Moose Blood’s subtle serenity and optimism. Sophomore record Blush is a true breath of fresh air.

The focus of the whole night, though, was very clearly A Day to Remember. The band last performed a headline set in Holland at the start of 2014, meaning that their return to Dutch soil was much appreciated by the huge throng of fans (plenty of whom materialized outside the 013 early in the morning, trickling in and out of the Monster Energy-infused queue throughout the day). Taking to the stage amidst a sea of hands and cheers, McKinnon commandeered the stage like a king as his band (guitarists Neil Westfall and Kevin Skaff, bassist Josh Woodard and drummer Alex Shelnutt) kicked into the grizzly Mr Highway’s Thinking About the End. The track, taken from 2009’s Homesick, is the perfect scene-setter for an evening which flittered between moments of balls-to-the-wall riffs and anthemic choruses (sometimes at the same time). If there was ever a time for the band to retire The Downfall of us All as staple set opener, then it was now. The track, which is still one of their tightest, fits in well at the tail-end of the show. It’s a final burst of energy in a set which drew from across the group’s full back catalogue without making ninety minutes of pop-punkcore sound laboured. And that’s exactly what makes A Day to Remember so great: their ability to churn out the same style of music for a while without enabling two songs to sound the same. Old cut I’m Made of Wax, Larry, What Are You Made Of? produced an early highlight in the show, with 2012’s Right Back At it Again navigating a more accessible path.

That’s not to say that new album Bad Vibrations (their first since leaving Victory Records) is a drivel-filled attempt at reliving past glories, though. On the contrary: Bad Vibrations is a breath of fresh air within the world of ADTR, manoeuvring across the band’s widening palette of musical influence with little difficulty. Lead single Paranoia hits harder than anything they’ve ever done before, straying further down the hardcore path in a fashion which drives Tilburg’s premiere sweatbox crazy. Limbs fly left, right and centre across the floor as the band’s relatively tween-ish fanbase show their parents (plenty of whom are perched atop the balcony) exactly how to have fun at a show. Pop punk-esque single Naivety tells a story of self-assurance in a chorus which sounds like it was lifted from Camp Rock, with title track Bad Vibrations and blink-182 power ballad We Got This adding some more fuel to the fire which is an A Day to Remember show. If you spend the duration of an ADTR show standing still, then you’re probably doing it very, very wrong.

In short: A Day to Remember are still here with plenty of good reason, and it looks like nothing is going to stop them. You know the deal: band gets massive, plays arena shows, goes back to clubs and then fades away into obscurity while they knock about on the Vans Warped Tour every other year in a wild hope to justify their far-fetched relevance. Not McKinnon and co., though; ADTR can only get even bigger from here on out and they’re going to take anyone with them who’s prepared to hitch a ride.

Bad Vibrations is out now. Check back later today for a full gallery form the show, which you’ll find here.