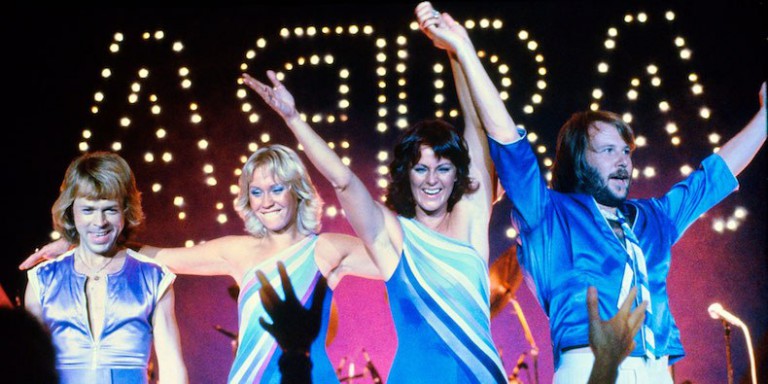 Later this week, the unthinkable looks set to finally happen: new music from ABBA. Undoubtedly the overlords of pop, the iconic Swedes have left an imprint on music which spans genres, generations, decades and so much more. After splitting up in 1983, you’d think that their music would just fade away and become a product of nostalgia. And although it still is a product of nostalgia, it’s become so much more. Movies, theater shows, endless tributes and the like followed in the decades after their break-up, bringing ABBA’s music to new generations with ease. And as you can probably tell, it stuck: ABBA are still one of the most listened to and influential pop artists of all time, uniting new listeners both young and old for late night parties, heartbreaks and just all sorts of other emotions. On Thursday – and some three years after it was first teased – Agnetha, Björn, Benny and Anni-Frid return with a brand new project: ABBA Voyage. Purported to be a hologram live experience, Voyage is also rumoured to be the title of a brand new album from the group, their first since 1981’s The Visitors. In anticipation of this new music, as well as the new music set to accompany it, we’ve trawled through their expansive back catalogue and picked their ten best pieces of music. From disco to folk via a multitude of tearjerkers, here are ABBA’s top ten songs – ranked.

A wholly understated song in the band’s back catalogue, I’m a Marionette was famously covered by Swedish metallers Ghost a few years back. It should thus be no surprise that the Tobias Forge-fronted group have gone on to take plenty of influence from ABBA’s music. It’s a moody, sweeping cut with vocal urgency and a killer guitar solo that deserves to be heard more often than it is.

9 TAKE A CHANCE ON ME

Take a Chance on Me‘s first 45 seconds are almost misleading when you put its happy vocal chants and wispy synth line up against its sultry verse, but it somehow works. The best of both worlds, huh?

This one hits you from the word go with pulsating rhythms and an almost Hollywood-like swagger which begs to be listened to while strutting down a neon-lit street somewhere along the West Coast. Summer Night City oozes cool, something ABBA were always so good at.

7 IF IT WASN’T FOR THE NIGHTS

You know it’s a deep cut when it’s not even on the 59-song iconic career retrospective ABBA Gold. If It Wasn’t For the Nights sounds endlessly joyful, even if its lyrics deal with self-doubt and anxiety at the end of working day.

Voulez-Vous was ABBA veering into rockier territory, employing a slick guitar passages alongside a four-to-the-floor disco beat. “You know what I mean…“

5 DOES YOUR MOTHER KNOW

Nowadays, the lyrics to Does Your Mother Know might raise a few eyebrows, but it’s important to note that the song was written from the point of view of a musician sought after by a (too young) fan and not the other way around. Having said that, it’s a banger with about as much danceable energy as a lightning strike. It’s less disco, more rockabilly, but still complete with punchy synths.

It’s at this point in our countdown that the list becomes progressively harder to put together. Gimme! Gimme! Gimme! (A Man After Midnight) features what is undoubtedly one of ABBA’s most iconic melodies. It’s thus no wonder that both Madonna and Gucci Mane sampled it. The chorus is as solid as a rock, its slap bass rhythms intertwining seamlessly with that synth and vocals which are equal parts mysterious and sultry. A pure dance floor banger.

3 THE WINNER TAKES IT ALL

Over the years, ABBA proved that they had it all: disco songs, folk songs, hearty love songs and classic power ballads. The Winner Takes It All falls under the last category, serving as one of the group’s best lighters-in-the-air moments. What’s not to love about this song? There’s the emotive piano line, the sad-but-relatable lyrics and the booming chorus. But there’s also an ending which combines all of ABBA’s key hallmarks: power (see: the piano intensifying), emotion (Agnetha’s soaring voice) and bittersweet melancholy (there’s just something about those chord progressions). It takes its time, allowing the individual elements to build up across five minutes, eventually hitting the spot in a way that only ABBA know how.

2 LAY ALL YOUR LOVE ON ME

This song is nearly flawless. Its hauntingly melancholic synths, iconic chorus and punchy verses are just three of the many elements which make Lay All Your Love On Me one of ABBA’s best songs ever. There’s something very special about that brooding synth line; it keeps creeping up on you, drawing you in and never letting go. “Don’t go wasting your emotions, lay all your love on me” sing the group during the chorus with utmost determination, so certain of what they want that you wouldn’t want to suggest anything else. There’s a reason this song has more than 130 million streams on Spotify, and the answer lies within its four and a half buzzing minutes.

There was only ever going to be one song at the top: Dancing Queen. Has there ever been a pop song as perfect in every regard? Not a chance. Dancing Queen is the perfect pop song. It’s the kind of song you’d leave behind in a time capsule for future generations to discover. The kind of song that puts a smile on your face no matter your mood. Aside from being a bona fide anthem, it also ticks all the right musical boxes. Shuffling percussion? Check. Bold piano passages? Check. Beautiful strings? Check. “You can dance, you can jive, having the time of your life” is perhaps the best vocal hook in pop history, hitting you like a warm cloud of euphoria which begs for one thing and one thing only: you getting up your feet and belting the lyrics out of your chest like your life depends on it. Its lyrics embrace eternal youth and living without a care in the world, achieving lyrical bliss on multiple occasions. Not only does this song serve as ABBA’s biggest hit (which should not surprise anyone), but it also just the perfect song. Critics and fellow musicians have analysed and picked the song apart for years, and they all come down to the same conclusion: Dancing Queen is the best pop song ever made. You can’t fault a song as strong as this; it’s on a whole new level – untouchable, a song most pop writers wish they had written. Get off your ass, put on Dancing Queen, feel the beat from the tambourine and lose yourself in the music.

Putting together a longlist is tough enough, let alone just ten songs. Listen to ABBA’s expansive discography here, and keep an eye out for their major announcement this coming Thursday (2 September).