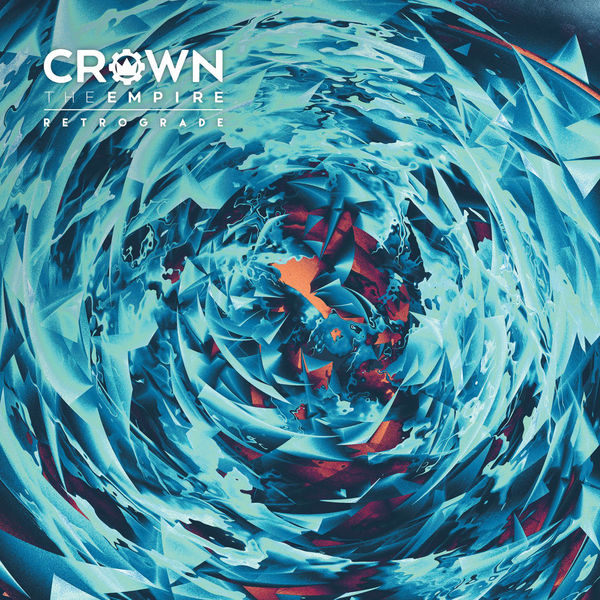 As sonic departures within the alternative scene go, you could suggest that Crown the Empire’s latest endeavour is one that won’t be forgotten soon. Emerging from within the confines of Dallas’ Colleyville Heritage High School, and via several line-up changes, the collective have made the transition from brutal metalcore with a melodic edge to melodic rock with a brutal edge. It’s not so much a transition as it is a switch of musical emphasis, but it’s still a big change for a band whose award-winning 2014 album The Resistance: Rise of the Runaways was centred on a dystopian, gang-centric future. Last week, the Andy Leo and David Escamilla-fronted quintet put out new album Retrograde, a record which takes all the focus away from Crown the Empire’s concept-based first records and shifts it firmly towards a bright and colourful look into the future, albeit one in which many questions need answering.

Crown the Empire have always had a knack for incorporating outside elements into a genre dominated by 0000-drops and blast beats, with album opener SK-68 instantly encompassing twinkling piano’s, melancholically altered vocals and subtle strings. It sounds almost as if you’re stepping into Crown the Empire’s latest fairytale-like concept album, but Retrograde is far from this. For once, the quintet have made a serious record which is built to last both as a collection of songs as well as a set of individual tracks. The record may have some interconnecting traits, such as the use of vocal samples about extraterrestrial life, but on the whole it’s just a jubilant example of a band doing what they love, and doing it well. Are You Coming With Me? samples a radio recording about intergalactic affairs, before brutal metalcore riffs and pounding drums intertwine for what sounds like a radio-friendly version of everything Crown the Empire have done before. “What a fucked up love we behold” claims Leo early on, his outsider observations setting the scene for the rest of the record. Recent single Weight of the World employs similar lyrical techniques later on, with Leo sounding concerned and frustrated about the state of the world in which we reside. “You can hold your breath, ‘cus I won’t hold mine” he declares as the band launch into what may well be their biggest chorus to date. Although his outsider observation finds itself within a larger context, it’s very clear that they’ve also been applied to the band’s personal situations. “You wouldn’t care if it killed me” continues Leo, implying that his greater observations are also found on a smaller scale. Escamilla’s contribution to the track is by way of a guttural “I’m so sick”, something which he repeats at various intervals throughout the track.

Although it’s very evident that Crown the Empire have reinvented their sound from top to bottom, it’s also clear that their roots pop up throughout. Lead single Zero sounds like the band that fans grew to love, encompassing a grisly riff alongside lofty choruses for which a glass ceiling doesn’t seem to exist. It’s here where Escamilla has his chance to shine, with his unclean vocals taking the helm throughout as they contrast serenely with Leo’s clean howls. “We’re dying for more everyday” he claims, a line which is extremely applicable to the actual state of our planet in this day and age. The electronic drums-laden Aftermath is a departure, straying away from unclean vocals for the most part as vibrant rhythms and ambient synths intertwine alongside a radio friendly chorus. The amount of radio friendly choruses on Retrograde is certainly no surprise, though; rather, it’s now become an expectation. The band have a real knack for utilizing poppy elements well, and it’s helped them stand out from their counterparts to great lengths. Heavier tracks still preside, but the amount of anthemic weight which they now carry has increased tenfold as opposed to Rise of the Runaways. The manic Hologram portrays this sonic shift perfectly, sampling more NASA-light outer space missives in a way which makes the track equal parts haunting and beautiful. “Do you know who I am? I’m afraid you don’t understand” queries Leo, sounding fragile and terrified about the prospects he faces. The Fear is Real marks the biggest sonic shift on the record, remaining mostly instrumental for its running length and utilizing obscure (outer space-y, even) synths and drum pads to send across a message which wouldn’t sound out of place on an Aphex Twin record (“If you open the door, time and space will follow you home“). Are Crown the Empire scared of what’s out there? Because it certainly sounds like it, even if the dark and twisted Lucky Us sees them ever so slightly reassured and hopeful. Signs of Life introduces acoustic guitars and lilting synths to the frame on one of the record’s softer tracks, before the album heads for an end on the rockier Oxygen. A fuzzy intro riff and Leo’s echoed vocals intertwine as the vocalist talks of alien life and the possibility that “we’re not alone”. Kaleidoscope is the album’s subsequent curtain call, ending the record on a bombastic declaration of, “the world is yours!” It’s a pensive finale, one that puts Crown the Empire in a position which enables them to reflect on the past and look into the future at the same time.

On Retrograde, Crown the Empire have tried to prove a variety of points, whilst also posing a lot of unanswered questions which beg for a follow-up record. Following Rise of the Runaways and its accompanying deluxe reissue, the band found themselves at a crossroads; guitarist Benn Suede had left the band due to dynamic differences, with his reasons probably relating to the new direction which his former band have headed in. If the decision has paid off remains to be seen, but there’s one thing that the world can certainly be sure of: Crown the Empire are here to stay, and they can only get bigger.

Retrograde is out now via Rise Records.