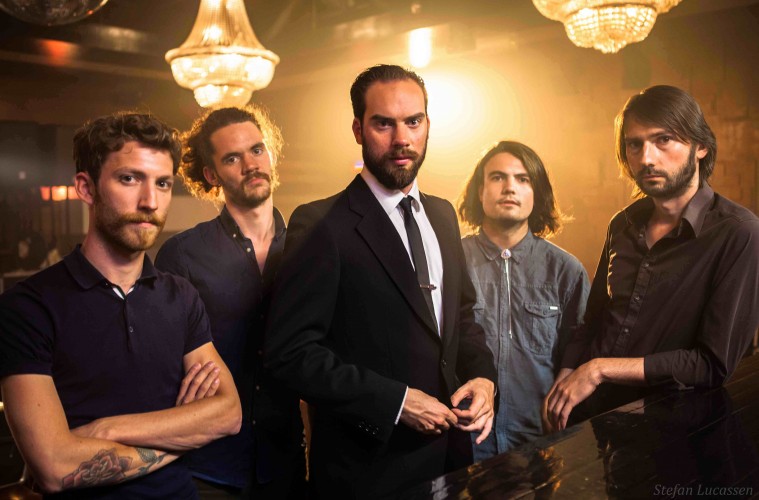 De Staat are currently not just the most entertaining Dutch band around, but they’re also the most prolific. New album O, out now via Caroline, is just the latest instalment in a career which has seen the band throw curveball upon curveball upon baying fans. Fronted by the exuberant Torre Florim, De Staat are well on their way to making a name for themselves outside the Benelux region.

O opens on the glam-rock infused Peptalk, which is held together by a classy melody line and old-school synths. It’s not too dissimilar from De Staat’s previous output, yet Florim’s witty lyrics still stand out. “Stop the talk, there’s nothing left to fight for” he sings during the first verse as waspy synths underpin him. “It is true, we are through” he declares during the chorus together with his bandmates, ensuring that O receives the bombastic opening it deserves. Make the Call, Leave it All picks up a classic-rock infused baton which ultimately sees a funky synth and percussion combo form the track’s basis. “A future set in stone, the super average drone, that’s me” declares Floris as a loosely-structured guitar line courtesy of Vedran Mircetic underpins him. The track operates at a slower pace than Peptalk, but it just packs enough punch to keep you interested. Get on Screen’s eerie, video game melody and shuffling synth accompaniment are absolutely terrifying yet some up everything which De Staat do best – intriguing melodies, tongue-in-cheek lyrics and exciting instrumental combinations. Drummer Tim van Delft’s pounding percussion gives the track an in-your-face element which Florim uses to his advantage. “It’s only fun when the pleasure’s measured” he claims, before Murder Death slightly slows the pace of the record down. A jangly guitar line forms the undertone of the track alongside a gritty second guitar and funk-laden percussive moments. It has a dark, desert-y vibe completely different to the Nijmegen studio in which O was created. Save for Florim’s clearly recognized vocal tone, Murder Death could pass as a Queens of the Stone Age track, completely with Josh Homme’s hip-shaking ferocity. Blues is Dead takes a very clear blues approach to the track, albeit one which has been pumped up and injected with more classic De Staat elements. The stop-start verses feature the occasional gang vocal, before the pre-chorus adds a masterful guitar riff to proceedings. “I’ve got 99 solutions but the blues got none” sings Florim, adding fuel to the fire which claims to be the death of blues. If it weren’t for the intriguing synth melody and sudden tempo change, Blues is Dead could have been released back in the 1970’s. Baby’s groovy opening and wailed backing noises make for the approximate halfway point on O, making for more exciting interplay between Florim and the rest of the band. On Time Will Get us Too, the pace is slowed down as an almost-psychedelic synth line takes the reigns. It’s the longest track on the album at over six minutes, and it makes use of all its time wisely. Bassist Jop van Summeren’s plucked bassline is the most prominent on this song, which bears a huge chorus perfectly capable to shed a few tears and introduce lighter-in-the-air moments. Round’s short and sharp melody stabs are a nice filler on the record, with Mircetic and synth player Rocco Heuting battling it out to overpower one another seamlessly. It makes way for one of the very few moments on O where Florim makes use of his formidable falsetto tone, using to add a light-headed sense of wooziness to the chorus. Life is a Game (Ladadi Ladada) is the most exciting track on the album, using a fuzzy guitar chug and powerful drums, both of which slowly build up and morph into a full-speed riot scenario. Florim presents himself as the ringmaster here, and it sounds almost inevitable that this track will spark the best crowd reaction throughout the band’s national tour next month.

On Systematic Lover, another hefty dose of funk grooves are injected into proceedings, with some more QOTSA-esque whammy stabs appearing throughout. You couldn’t exactly call it desert rock, but it certainly comes close. Penultimate album track Help Yourself utilizes robotic vocals and mechanical-sounding instrumentation, both of which combine to aid Florim in his travels. As he laughs quasi-manically, he declares that someone must help themselves if they want to “join the club”. It’s not the most encapsulating track on the record, but that changes halfway through when the song becomes more of a messy, Vocoder-led riot. O comes to a close on the twinkling She’s With Me, which makes use of some more country rock and blues elements. “It’s too late, she’s long gone” sings Florim as a sense of melancholy surrounds him and the whole track. As the song progresses, elements almost akin to Radiohead start to appear thanks to Florim’s falsetto-d wails and ambient guitar sounds. She’s With Me might be the most stripped down song on the record, but it’s also the most thought-provoking track on the whole of O. On this album, De Staat have proven that their capabilities should enable them to stretch out way beyond the confines of Holland, Belgium and Luxembourg. De Staat are a world-beating band of the future, and now it’s their time to shine.

You can stream O here. Featured image by Stefan Lucassen.