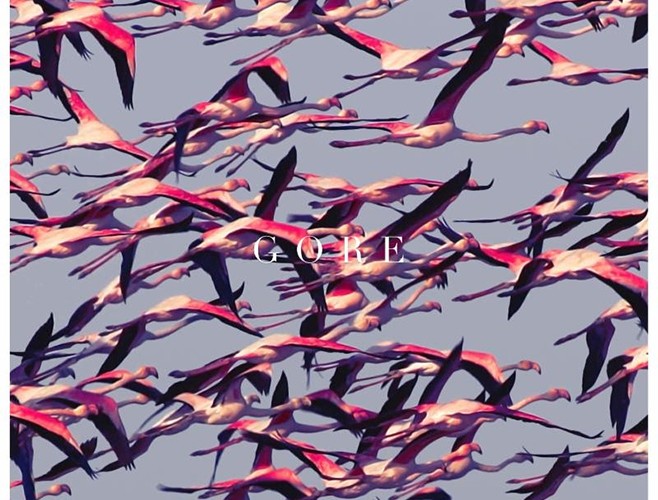 It’s been four years since Deftones released the magnificent Koi No Yokan, with the Chino Moreno-fronted outfit having spent their downtime slowly but surely working towards another new full-length. The full-length in question is Gore, a record which demonstrates Deftones’ subtle sonic progression from raw hard-rockers to a group of men with plenty to say. Encompassing industrial guitar lines, huge choruses and powerful rhythm sections, Gore may well be Deftones’ defining statement.

The record opens on Prayers/Triangles, a track which cemented Moreno and co.’s comeback earlier this year and solidified their status as a force to be reckoned with. The main focus of the song is its verse, one which is laced with subtle percussion and lilting bass, before a massive chorus enters the frame and exploits Moreno’s sharp screams and intense vocalization. Throughout the whole of Gore, this combination becomes a fruitful one. At times, Moreno even sounds fragile, almost as if he is breaking down at the core. Acid Hologram keeps the pace slower once more, with lead guitarist Stephen Carpenter making use of fuzzy effects and a chugged guitar line which helps the track progress nicely. A darker mid-section forces him into the forefront as his guitar loops and chugs its way around Moreno’s breakable vocals. Bassist Sergio Varga further underpins the whole affair with a gritty bassline, something he really hits home with on Doomed User. An extremely low-tuned riff and overall sense of heavier awareness intertwine on the track, one which yet again sees Moreno wail his way through the sonic walls which Gore have enabled Deftones to destroy.

Geometric Headdress’ intro speeds proceedings up significantly, before the verse brings Gore back down to earth for a haunting combination of spidery guitars and Abe Cunningham’s tempo-changing percussive bursts. “As the words draw you in, our fate reconnects” sings Moreno at one point, before singing of collapsing hearts and “your glitz and your glam”. Hearts / Wires bubbles along with a pulsating electronic intro, enabling Carpenter to accompany it with light guitar soundscapes. It’s on a more grandiose and anthemic level to other cuts on Gore, using chopped-up six-string effects to eventually make way for a slower verse. The rhythm section are at the core here, demoting Carpenter to a mere fill-in and promoting Moreno to a man atop the world preaching his ways. The layered Pittura Infamante (which is the term for defamatory paintings and relief) is a haunting landscape of scraggly guitars and vocals of epic proportions. “We found your grail and drank your juice” preaches Moreno ahead of the chorus, one which signals out topics of immersion and truth. Xenon, the shortest track on the record, utilizes a quirky riff and machinelike bleeps, with Moreno’s vocals cloaked by a Vocoder. It’s a slow-burner, albeit one which sounds massive when it finally kicks in to shape. (L)MIRL, on the other hand, burns even slower and takes even longer to make a point of itself. As the intro progresses by means of pure ambience and watered-down instruments, Moreno comes in with a subtle declaration: “I don’t miss you. I don’t care who you are now”. It’s a bold statement to make, but one which Moreno delivers with intent.

Gore, the title track, draws the listener in with percussive cymbal emphasis and drawn-out guitar lines, both of which underpin Moreno’s once again haunting vocals. The chorus is the heaviest moment on the album, utilizing screamed howls and low-tuned guitars. In comparison to the rest of the record, the title track makes use of contrast well and ensures that there is some variation on a record which was slowly starting to sound like one continuous track. Deftones have a distinct sound, yet this is sometimes a disadvantage. Especially when you run the risk of letting songs sound similar to one another. “Lost in the streets we arrived in” declares Moreno later on, before penultimate track Phantom Bride makes use of finger-picked guitar echoes and a return to fragility for Moreno. It’s on Phantom Bride that he hits higher notes than before on Gore, even if the track doesn’t do much to cause excitement or progression. It remains rather stagnant, choosing to draw in the listener instead of picking them up and shaking them into different realms of musical consciousness. Gore comes to an end on the masterful Rubicon, a track which uses huge riffs and anthemic vocals to bring the record to a cataclysmic finale. Gore may be an album which draws from a lot of the same sonic influences, but it’s also one which has enabled Deftones to present the world with one of 2016’s best heavy albums yet. A continuous stream of Stephen Carpenter’s haunting guitar lines and Chino Moreno’s magnificent vocals form just one part of a fantastic musical combination, with drummer Abe Cunningham, keyboardist Frank Delgado and bassist Sergio Vega bringing just as much to the table. It may have taken them four years, but Deftones are back stronger than ever.

Gore is out now. Watch the brand new video for Prayers/Triangles below.