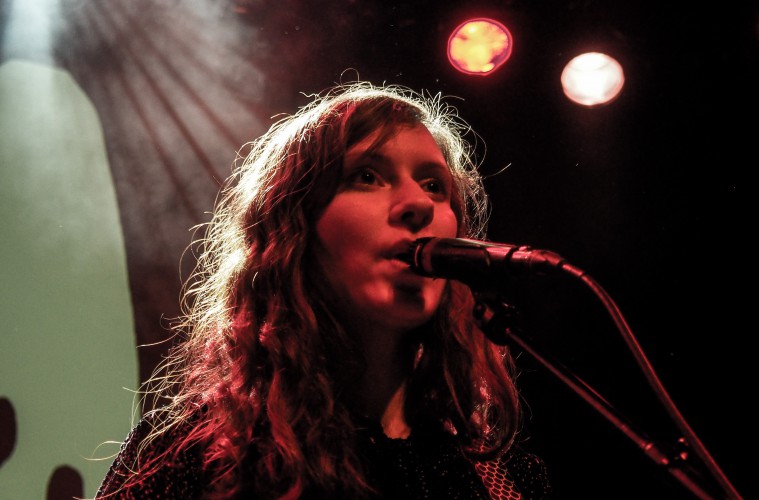 Nowadays, psychedelic music is all everywhere. Whilst there are many bands that are drawing inspiration from 60s music, there are few who stand the test of originality. Holland’s very own Eerie Wanda, consisting of singer-songwriter Marina Tadic and fellow musicians from Jacco Gardner’s acclaimed live band, have just released their debut album Hum. Eerie Wanda is no exception to the given fact that I mentioned before. Whilst being signed to Beyond Beyond Is Beyond records (from New York) and touring through the United States, their brand new release is being put to the test of psych-revival. On opener Happy Hard Times, the mood for the rest of the record is set immediately. The melodically surprising track lingers nicely, and when it gets to the chorus a very surprising element is introduced. The lead vocals are doubled with a reversed vocal track, which gives a strange, though very cool, effect. Production-wise, the reverberated female vocals tend to sound a little bit soft, while the bass and lead guitars are clearly present in the foreground. The drums sound muffled and dry, which puts them in place perfectly. The sound of the record pretty much remains this way all the way through.

The listening experience continues with I Am Over Here, a song which is more upbeat than the opening track. The rhythmic section, consisting of hand claps and tambourines, invites the listener to nod their heads a bit more than the first song does. Mirage is a surprising song which contains some very experimental, almost off-sounding melodies. They lead to the track which really opens up the record – New Harmony. After a slow, but cleverly planned opening to Hum, it’s New Harmony which really opens up the LP.

Whilst Tadic is mostly accompanied by strummed electric guitars, plucked basses and simple rhythms, there seems to be some room for variation on Volcano Lagoon. A bossanova-like rhythm, surrounded by beautiful finger-picked guitars, makes this track stand out most on this record, even more than New Harmony did. “Wait, wait, wait, for a while”, Tadic sings on title track Hum. About halfway through the record, To Dream Again makes for an extremely danceable track, which is something the record really needed.

Reflecting the sound of Hank Marvin (The Shadows) are the electric guitars on The Reason, which sound absolutely gorgeous and are a treat to listen to. It’s also this very song which, for the first time, introduces some acoustic guitars to Hum. Through the grooving and exciting percussive parts on Vinny, the album moves on to Working In The Field, in which Tadic herself announces that we’re almost done listening. “When the conversation is done, I’ll go back to where I belong”. Where she and her fellow musicians belong is very clear. An almost totally stripped down The Boy and the minimalistic There Aren’t Many Things close the record with the help of an applauding audience.

Eerie Wanda’s psychedelic pop definitely points itself towards a specific audience. The groups seems to have found their audience whilst touring through the USA and Holland. A few exceptions aside, the songs on Hum are slow, and at times even tend to be a little dull. That, however, is not a bad thing. The music certainly hits the spot when it comes to making a point. A point that, in my opinion, is all about taking influences from back in the day to a new level and reaching a specific and dedicated audience.

Hum is out now. Listen to Vinny below.