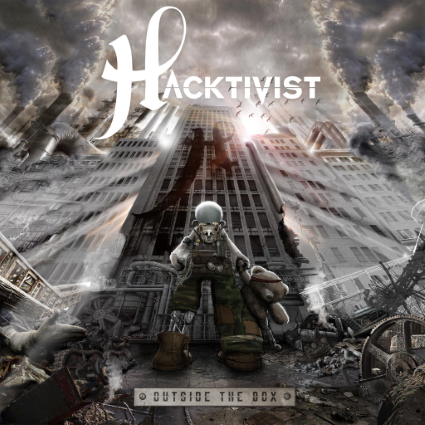 Album Review: Hacktivist – Outside the Box

Djent. You either love it or you hate it. Many bands have tried perfecting their craft in the genre over the last years, most notably the likes of Meshuggah, SikTh and TesseracT. Now, one more band has popped up and slowly made a name for themselves in the scene – Hacktivist. The Milton Keynes quintet, who formed in 2011, have spent the last few years releasing provocative EPs and playing huge shows the world over with the likes of Enter Shikari and SikTh. Today, the band have put out their long-awaited debut album Outside the Box. Is it worth the hype, though? Read on and find out.

Our Time, which features Marlon Hurley, opens on a rather bold message. “If you’re listening to this album we thank you, you’ve opened up to the notion that you don’t need to follow” starts co-frontman Jermaine Hurley, before his declarations slowly escalate to Hacktivist claiming their well-deserved arrival. “Do not obey, do not conform” continues Hurey, with his vocals quickly followed by low-tuned guitar chugs and pounding percussion. This shorter intro sets the scene for what the rest of the record is set to bring to the table. An electronically-tinged intro presents the listener with Hate, a track which leans towards more nu-metal undertones. Hurley’s accomplice Ben Marvin takes the vocal lead during the intro, his rapped vocals underpinned by Richard Hawking’s forceful drums. Marvin raps on topics of defiance and being in a touring band, with one line referencing their on-the-road perseverance during tough times: “We don’t get sick of abuse, we get up for a show in Amsterdam”. The track is filled with defiance and demonstrates the band’s ability to inject everything they feel strongly about into a sonically visceral final product. Deceive & Defy, which features Heart of a Coward’s Jamie Graham, features the first instance of screamed vocals on the record, with Hurley rapping about the tough struggles to fame. The X Factor is a main point of reference on this track, with Hurley referring to its shallow aims. As with most of Hacktivist’s tracks, the guitars are fierce, brutal and just one part of an absolutely in-your-face end product. Graham’s guttural vocal additions are a welcome contribution to the track, opening up a whole new dimension for Hacktivist to draw from.

Graham is one of four guest vocalists on the record, with Enter Shikari frontman Rou Reynolds adding his recognizable voice to new single Taken. A hypnotic, guitar-led wail forms the main basis of Taken’s melody throughout the track, adding another new dimension to the box with Hacktivist are starting to think outside of. The vocals are twice as fast this time round, with a slowed-down chorus providing Reynolds the opportunity to sing of losing face and “offering a shoulder”. The whole track flitters between provocative, speedy verses and reassuring choruses, both of which make way for an emotionally heartfelt breakdown. “There will be a time where everything’s falling, or so it seems” declares Marvin, before an anthemic solo brings the track down to its knees. Taken is by far one of the best tracks on the record, utilizing elements which enable you to differentiate old-school Hacktivist from its newer, more polished incarnation. The Storm makes use of sampled rain sounds and a lone guitar line during the intro, reinforcing the darker undertones present throughout the record. A dubby percussive beat and selected electronic bleeps are the predominant mainstay during the bulk of the song, before the heavens open and make way for No Way Back’s fierce intro. The track opens on a down-tuned riff courtesy of Timfy James, whose guitar work throughout the whole record is nothing short of intriguing. “We’re breaking the silence, get behind us” declares Hurley at one point, before Marvin takes the helm during a powerful chorus. “When you’re flying this high, there’s a higher drop” he claims, his vocal delivery demonstrating a real sense of meaning. False Idols follows, utilizing clean vocals and a guitar riff which both lean more towards a heavier version of Limp Bizkit during their Chocolate Starfish days. Timfy James sings of “false idols in our eyes”, his clean vocals alternating with Marvin and Hurley’s knife-sharp raps. Josh Gurner’s bass stands out here, taking Hawking’s slower drumming and underpinning it with groove-laden bass.

Astroid Boys and Jot Maxi feature on the more electronically-focussed Rotten, a track which utilizes Vocoder vocal effects and a hip-hop centric percussive beat. “We called for god, do you think he heard it?” asks Maxi, his guest raps adding more influential depth to the already-deep pool of influences Hacktivist are fishing in. Elevate presents itself as an extreme contrast to Rotten, making use of pit-ready riffs and rhythms so deep that they could cause the Earth to shake. Slight electronic elements pop in and out of consciousness along the way, with Marvin namechecking the White House as he sings of the system being “overrun by the power of the gun”. “What happened to the right side of the brain?” asks Hurley at one point, proving to the world that Hacktivist aren’t afraid of holding back in expressing what they truly feel. Title track Outside the Box does exactly what the name says, with the band introducing acoustic guitars and subdued electronic percussion. “’Cus we live how we sound, outside of the box” raps Hurley as he thanks everyone for their continued support. It’s the most personal track on the record, with both Hurley and Marvin waxing lyrical on their personal situations and the lengths that they’ve come since Hacktivist formed. As the guitars come in with full force, it’s very clear that the band don’t feel like giving in just yet. In fact, they’re only just getting started. Recent single Buszy is the penultimate track on the record, its lyrics an ode to the former Milton Keynes venue and community centre of the same name. Outside the Box comes to an end on The Storm II, which presents itself as a big brother to earlier cut The Storm. It’s a more fully fledged track than its earlier accomplice, giving the record an ending it can be proud of. “We will return” wails Timfy, his clean vocals the only thing which holds the track together properly.

On Outside the Box, Hacktivist have shown themselves to be the kind of band that only comes along once in a blue moon. Right now, there isn’t a group out there who sound quite like them. Ben Marvin and Jermaine Hurley are two co-frontmen with a strong message which people ought to hear as soon as possible, because a band as socially aware and mentally conscious as Hacktivist doesn’t come round that often.

Outside the Box is out now via UNFD/Rise Records. Stream it below.