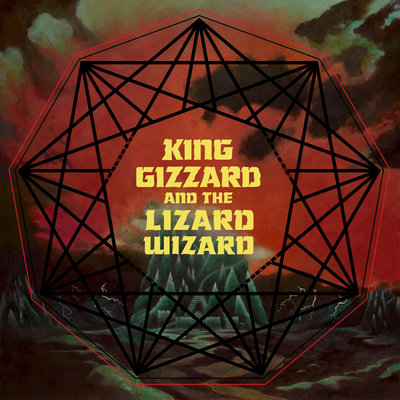 Most great things come in big groups. You’ve got Ocean’s Eleven (eleven smartly dressed men fighting), the Harry Potter series (seven magnificent books and eight subsequent films) and King Gizzard & the Lizard Wizard. These seven mad Aussies have rebooted themselves on an almost bi-yearly basis, having churned out album after album in the space of a few short years. Following 2014’s garage-flecked I’m In Your Mind Fuzz, 2015’s acid-tinged Quarters and poppy Papier Mache Dream Balloon, the Stu Mackenzie-fronted outfit have returned with yet another album: Nonagon Infinity. Now, the emphasis on this new opus is the number nine. Aside from being named after a nine-sided shape and bearing nine songs, its vinyl release will be in the shape of a nonagon, with every single song on the record connected. There isn’t a start, an there isn’t an end; rather, it’s an infinite collection of madness which only these Geelong psych-rockers could come up with. Recorded in Brooklyn together with Wayne Gordon and Paul Maybury, Nonagon Infinity is King Gizzard’s fourth album in 18 months, and by far their most ambitious.

One thing to keep in mind when listening to Nonagon Infinity is that King Gizzard are essentially a jam-band. They take a varying degree of elements from across their career, blend them into one another, re-use them and then do it all over again. Nonagon Infinity is filled with a recurring selection of motifs from the word go, with opener Robot Stop setting the scene. “Nonagon Infinity opens the door” sings Mackenzie instantly, before an apocalyptic caterwauling of instruments collide for the first of many manic breakdowns. A continuous percussive beat is maintained for most of the record, with co-drummers Eric Moore and Michael Cavanagh really pushing themselves to the full extent of their abilities. Mackenzie, whose vocals are laced in Vocoders throughout the album, sounds like an evil ringmaster in control of his band, all six of whom seem to be sweating out everything they can and pushing themselves fully. The backbone on Nonagon Infinity consists of Moore & Cavanagh’s drums, alongside Lucas Skinner’s wholly underrated bass. This musical core underpins a whole host of jams, riffs and licks from the rest of the band, including re-used guitar stabs and harmonica solos. As Robot Stop careers towards an “end”, the tension builds and Big Fat Wasp kicks into ninth gear. The chorus on Big Fat Wasp is dark, menacing and heavy-as-fuck, something which King Gizzard stayed away from on both Quarters and Papier Mache Dream Balloon. Whereas both those records were influenced by poppy folk and acid jazz, Nonagon Infinity seemingly finds its roots embedded deeply within the world of fucked-up garage psych and heavy metal. Hints of Black Sabbath? Check. Whammy guitars and synths? Check. Oddball vocals? Nonagon Infinity has it all, and the journey has only been underway for some ten minutes.

The great thing about this record is that you can hardly distinguish one song from the next. King Gizzard & the Lizard Wizard are taking everyone on a messed up rollercoaster which has no beginning or ending. Lead single Gamma Knife already presented the world with a small snapshot of this chaos, employing all of the record’s best elements into one coherent cut. Pulsating percussion and bass, stabbing guitars and harmonica flushes form the core of the track, before the record’s first slower elements are introduced. Albeit brief, the intro to People-Vultures is slow, daunting and tone-setting. “People vultures god approaches” declares Mackenzie at the start, before everything once again swirls into absolute chaos. Although the record at times sounds like something you’ve heard before (due to each song relying on the same backbone), King Gizzard keep chucking in new sounds to surprise everyone. “Final hearing, what else am I gonna do now?” asks Mackenzie later on before the record well and truly slows down for a mid-tempo breather. Mr. Beat’s strummed guitars and prominent bassline add a jazzier segment to the record, one which is likely very necessary following the preceding fifteen minutes of utter madness. “I only miss a beat” declares Mackenzie alongside funky organ passages and lilting guitars, with the second half of the track seeing him lose himself in his own vocals as the guitars take over in prominence. Mr. Beat may seem like a mid-album break to most, yet in all reality it simply precedes even more chaos than before.

Evil Death Roll: the name says it all. Effects-laden rawk guitars and Mackenzie’s thunderous vocals are at the forefront here, with the frontman declaring: “you started everything, you started killing things”. King Gizzard couldn’t sound darker if they tried, with Evil Death Roll definitely a track which bears plenty of pit-erupting potential. There are catchy segments every now and then, most likely having been thrown in to give the record a little bit of character. It would be a shame if the record was non-stop chaos, so the breathing moments and catchy passages are very much welcomed. The sheer amount of force which the band have put into the record after only six songs shows exactly how seriously the band are taking the whole concept. At seven minutes in length, Evil Death Roll is the longest track on the record and one which sounds like an angry old man who has seen it all. He’s angry, and he’s releasing his anger out on society by means of ravishing percussion, monstrous guitars and no-holds-barred vocals. Evil Death Roll is hypnotising stuff for sure, with Invisible Face picking up exactly where it leaves. Mackenzie brands the universe “a machine” as the underpinning guitars transition from in-your-face to jazzy, something completed by its smooth mid-section. It doesn’t rely on chaos, rather implementing oriental elements and warbled synth soundbites. It’s the sound of the aftermath, whereas Evil Death Roll is the sound of the catastrophe. As Invisible Face departs jazzland, everything remains slower for the remainder of this track and the next one.

Wah Wah is, as the name suggests, a track filled with wah-wah effects that sees everything remain slow yet intense. It’s the penultimate track on the record, with its placement emphasised by the slowly-burning tension that makes way for imminent album closer Road Train. As Wah Wah fully dies down, it seems as though the King Gizzard rollercoaster has one more trick up its sleeve. A bloody fast one at that. The pace of Moore and Cavanagh’s drumming is faster than ever before, with lyrics of Satan and pain further underpinned by chugging guitars which sonically represent a vehicle transporting the listener through the various strands of space and time which King Gizzard find themselves embedded within. The track stays at a constant pace for its first half, before everything slowly but surely becomes extremely intense. This is where the emphasis on 9 returns once more, with Mackenzie’s cry of “NONAGON INFINITY” making way for interrupted bursts of chaos. He further sings of how the Road Trains “comes to bring you shame”, a declaration which ultimately makes way for what sounds like the end of the world rebooting itself and heading back to square one again. Because before you know it, Road Train has ended and segued straight back into album opener Robot Stop almost seamlessly.

The whole concept behind Nonagon Infinity is an idea which only King Gizzard & the Lizard Wizard could think up, and it’s probably one best listened to on a whole host of mind-altering hallucinogens. That’s not to say that you shouldn’t enjoy the record sober, because regardless of your state of mind Nonagon Infinity is a record which is bound to mess with your senses and take full control of your mind. It’s going to be an ambitious endeavour to play these tracks live, although King Gizzard are such masters of their craft that they’ll probably be able to do this time and time again. Who knows, by the time they properly tour Nonagon Infinity they may have even written and recorded its follow-up. For now, though, let’s simply try to enjoy the mind-altering journey which Nonagon Infinity takes you on whilst spinning you around and refusing to let you go whatever it takes. Because it’s one hell of a journey, boy oh boy.

Nonagon Infinity comes out next week Friday (29 April) via Heavenly Recordings. However, you can already stream the record here (via NPR).