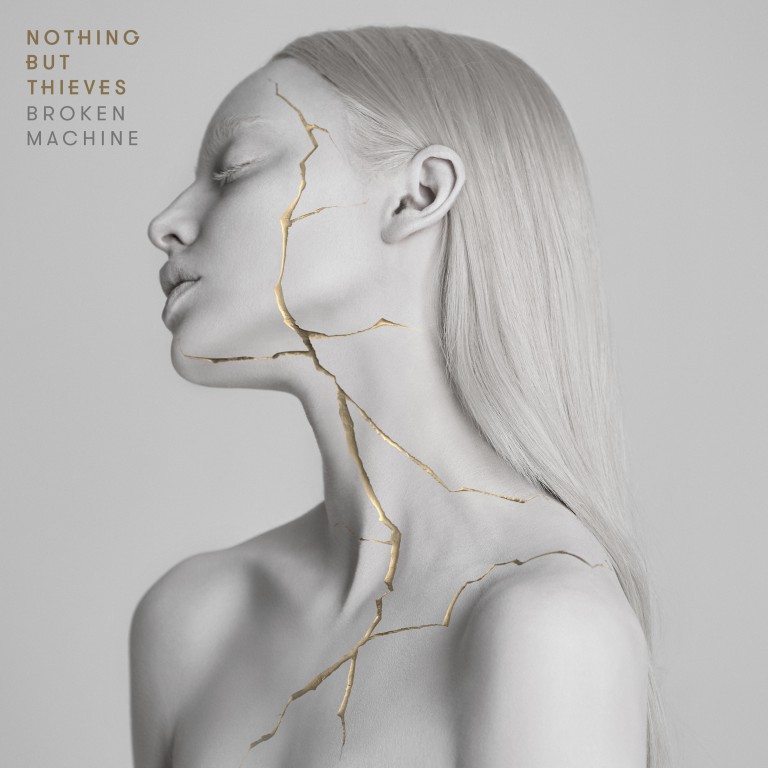 ALBUM REVIEW: Nothing But Thieves One Step Closer to World Domination on Broken Machine

When Conor Mason and his men in Nothing But Thieves emerged out of seemingly nowhere back at the tail-end of 2014, many people instantly knew that there was something special about these five unassuming lads from Southend-on-Sea. Was it their charm? Was it their killer riffs? Or was it Mason’s bewildering vocals? The answer is most definitely all three, plus the necessary and deserved label and media backing, which has enabled them to be in the sought-after position they are today. It’s a position that many of their contemporaries would kill for, but at the same time one which only those who have really worked their way up are worthy of. Their self-titled debut album received critical acclaim the world over, seeing them play to bigger crowds by the day and even head out on a run with Teignmouth trio Muse. Now, the band are gearing up to release the career-defining Broken Machine, an album which (if anything) will see them step inches closer to the world domination they deserve.

From the word go, it’s clear that the band are going to take no prisoners. Album opener I Was Just a Kid is a feral beast cloaked in menacing riffs, pulsating rhythms and hypnotic vocals, all three of which intertwine to form an incendiary final product. The chorus is an absolute belter, one which is equal parts anthemic and menacing. Mason’s descending wails and chant of the track’s title are all the band need to make a lasting impression from the off. It portrays the band in a darker, more mature light, whilst still managing to retain the hitmaking abilities which their debut album possessed so well. You’d half expect Josh Homme to come knocking for a vocal feature towards the end, but alas. Underneath the vocal effects, twinkling synths and soaring guitars are the foundations of a band who have spent years up building up to this moment. The record is only four minutes old at this point, but it already sounds like the infamous Second Album Syndrome should be of little concern. Lead single Amsterdam hits home just as hard, with Phil Blake’s pulsating bassline helping steer the track in a solid direction alongside sharp percussive work from James Price. The song is an ode to the Dutch capital, a city which Mason and co. have fond memories of. New single Sorry follows suit, slowing the pace down ever so slightly as the band follow a more radio-friendly, anthemic path. There are some Hot Fuss-era, Killers-lite synths strewn throughout, although this sonic comparison shouldn’t take away from the fact that it’s a stadium hit in the making. If there’s one thing in this world that’s a constant, then it’s Mason’s on-form deliveries.

Although Broken Machine is a familiar record of sorts (sonically, at least), there are a handful of avenues which the band have spent a little bit more time exploring. Title track Broken Machine experiments with looped vocal ad-libs and a lilting groove (the former accents the latter significantly), whereas the monstrous, Daily Mail-bashing Live Like Animals dabbles in electro-tinged riffs and a percussive chorus groove which could only be described as a happier Rammstein. It may take a few listens to come to that conclusion, but the similarities are definitely there if you listen closely. Both aforementioned tracks also allow Mason to explore the various wonders of his voice, with the latter track even incorporating some hip hop and spoke word outings. Despite the various elements which the band have experimented with on these two tracks, there’s still an air of familiarity which seems embedded within their songs. From Mason’s soaring choruses to gritty riffs and astounding rhythms, there really is no denying that this is Nothing But Thieves at their best. The slower Soda is one of Broken Machine’s most emotional tracks, encompassing grunge-laden guitar lines courtesy of Joe Langridge-Brown and Dom Craik. “I don’t wanna be myself, it’s making me so unwell” declares Mason during the chorus, adding later on that it would “make some sense” had he been dropped on his head as a kid. It’s evident that the band’s lyrical content on Broken Machine, much of which is written by Langridge-Brown too, has hit another emotionally mature peak.

At its core, Soda is quite a sad track which has Mason putting his heart right out on his sleeve. The band accompany his musings with stirring instrumentation, increasing the track’s emotional value. New single I’m Not Made By Design follows, picking up the pace by means of dirty guitar lines and one of Mason’s best vocal deliveries on the whole record. He muses about religion and politics throughout, even sounding like a darker, more pissed off Matt Bellamy as it reaches its destructive peak. The slower, hit-ready Particles follows, edging towards the more anthemic side of proceedings by means of synth-based rhythms and a dreamy chorus. “And if I need to rearrange my particles, I will for you” declares Mason during the chorus, his vocals once again on top form and sounding as strong as ever. It’s around this moment that Broken Machine slowly but surely approaches a whirlwind ending. Get Better hits hard, and is a short-but-sharp reminder that Nothing But Thieves can (and will) rock out just as ferociously as the likes of Muse, Royal Blood and Queens of the Stone Age. A one-two of the lilting-yet-dark Hell, Yeah and simply beautiful Afterlife bring Broken Machine to a subdued-yet-victorious curtain call, one which can only go to prove that Nothing But Thieves are a band for today’s socially conscious generation, and one who look to stand the test of time as they career onwards and upwards.

9/10. Broken Machine comes out on 8 September via Sony RCA. Watch the video for Amsterdam below.