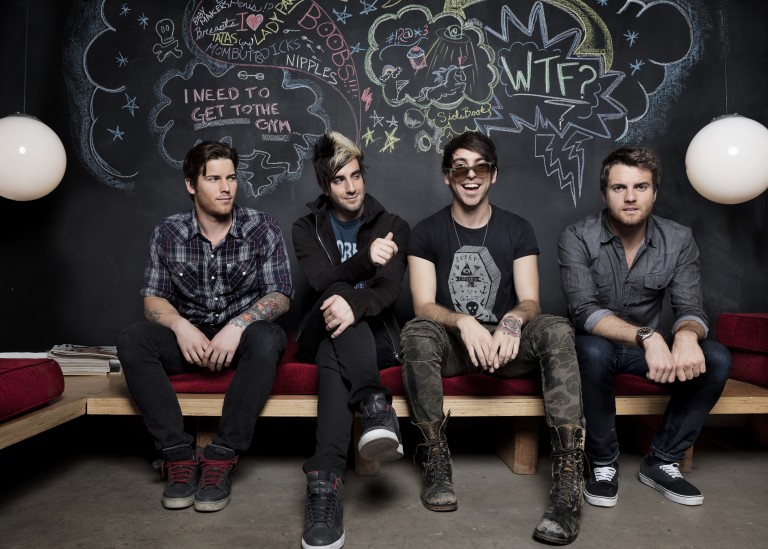 For a majority of All Time Low’s Dutch fans, Sunday the 23rd of February turned out to be a relatively long and eventful day. The Baltimore 4-piece were performing at Amsterdam’s legendary Paradiso in the evening, with tons of fans already showing up from the crack of dawn to secure good places in the 2,000-capacity former church. This is just one of many things that show how dedicated a fanbase All Time Low have, something which becomes more apparent over the course of the day. The group, fronted by Alex Gaskarth, spent the day in and out of the venue talking to fans and taking part in meet-and-greets as the queue slowly started increasing to around 1,000 eager fans by the time doors opened at 7pm. Joining them tonight, as with the other dates, were the magnificent Blitz Kids.

Consisting of frontman Joe James, guitarist Jono Yates, bassist Nic Montgomery and drummer Matt Freer, the Nantwich group rocketed through a 45-minute set consisting of new tracks such as Sometimes, All I Want Is Everything and Run for Cover, as well as older cuts. According to guitarist Jono Yates, the reception at every show on this tour is better than the night before, and this was definitely apparent in Amsterdam. The crowd was electric, and the band definitely worked well off of this energetic atmosphere. Blitz Kids are the kind of band who, if they keep progressing as they are now, could be as big as All Time Low in the near future.

With the venue filled to the brim, All Time Low took the stage just after 8:30pm to the screams of 2,000 crazy fans, as they kicked off their 24-song set with Do You Want Me (Dead?) from their 2011 release Dirty Work. Its massive chorus got the whole room shaking, as tons of underwear began being hurtled towards the stage. This is another example of how dedicated and crazed their fans are, with the hurtling of underwear being such a regular occurrence that a show without it would be quite odd. As the song built up and climaxed, the band went straight into the harder So Long Soldier, from 2012’s Don’t Panic. The lyrics to this song reference the fact that Alex Gaskarth was actually born in the UK, before moving to America in 1995 and eventually starting a band in 2005 with his friends Jack Barakat, Zach Merrick and Rian Dawson. The first moshpits of the night erupted here, with the fast chorus pushing everyone towards the barrier in sweltering heat. The Irony of Choking on a Lifesaver followed, with the whole room swerving left and right to the chilled out riffs and steady beat. Strobe-light filled Stella followed, with an extended intro which took elements of Green Day’s live show, as Gaskarth tried to get the crowd chanting at his command.

The slightly slower For Baltimore followed, before speeding up and leading into older classic Break Your Little Heart. This song, as with every song, garnered extremely loud screams from the crowd as they started hurtling items towards the stage. By the time Lost in Stereo kicked in with its crazy lighting, the first of five girls had to be dragged out from the crowd due to a panic attack. The crowd on the floor was packed in very tightly, with people constantly being crushed against the barrier due to large moshpits and crowdsurfers. At one point later in the show, Gaskarth stopped a song midway due to a girl having fainted down the front. It’s never nice to see these things happen at shows, especially when it happens more than once. Thankfully, security was brilliant last night, handing out water bottles to the manic crowd. Even up on the balcony, where we were, it was extremely hot and sweaty. The powerful Stay Awake was next, with Six Feet Under the Stars following to the sounds of 2,000 singing voices. Vegas and Guts followed suit, the former being a shorter pop punk anthem and the latter being a hands-in-the-air rocker.

Weightless received one of the biggest cheers of the night, with a massive moshpit emerging before exploding as the massive chorus kicked in. Once Weightless finished, the whole band left the stage before Gaskarth re-emerged by himself to play perfect acoustic renditions of Remembering Sunday and Therapy. It was so quiet that you could hear a pin drop. Before this, however, he was attacked by at least 75 glowsticks being thrown from all parts of the venue. Once he was done playing (and once all the glowsticks had been cleared), the whole band joined him onstage as they kicked into the unplayed Me Without You (All I Ever Wanted), before the poppier Damned If I Do Ya (Damned If I Don’t), during which the crowd went wild. Coffee Shop Soundtrack was introduced as an older track, before the anthemic Somewhere in Neverland made way for Time-Bomb. Gaskarth selected two girls from the crowd to sing this one, yet one of the girls was so speechless during the song that she couldn’t do it. They got to watch the remainder of the show from the side of the stage, with 2 songs left in the main set. The first of these, Backseat Serenade, was one of the high points of the night with its massive chorus and hand-clap beats. Oh, Calamity! finished off the main set, with the band swiftly leaving the stage to tons of cheering and screaming.

A mere 2 minutes later, the band re-emerged to play The Reckless and the Brave as the end of the show was slowly nearing. Masses of cheering erupted afterwards, when the band kicked into new single A Love Like War, minus Vic Fuentes. Once again massive moshpits erupted, before Dear Maria (Count Me In) ended an extremely successful show. The next time that All Time Low come back to Holland, it’ll surely be in a venue twice the size of the one they stunned tonight.