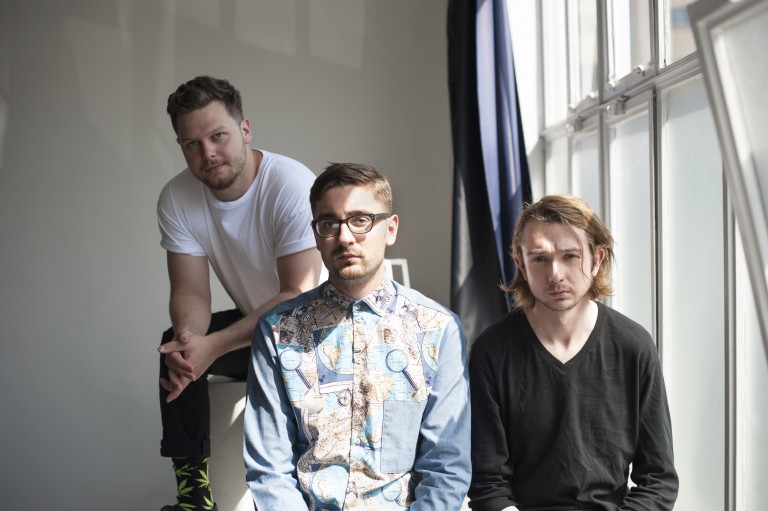 If there’s one band around right now whose stratosphericrise is something worth admiring, then it’s got to be Alt J. Fronted by JoeNewman, the now-trio’s minimal indie rock has made waves all over the world. Debut album An Awesome Wave earned them a Mercury Award and also saw them play massive stages the world over, with 2014’s sophomore release This Is All Yours exceeding all expectations and putting them on even bigger stages. As part of their European tour, together with young bands Gengahr and Wolf Alice, Alt J took their elaborate production to the Heineken Music Hall in Amsterdam last night for a sold out set.

Up-and-coming ones to watch Gengahr were first up, playing a rather short set of just 25 minutes for a half-full Heineken Music Hall. The set showed plenty of potential, particularly in the likes of Bathed in Light and the recently released She’s a Witch. “Bathed in light, I’ll be waiting for the night” sang their frontman on the former with his soothing voice underpinned
by a mix of faux-grooved drums and hypnotic guitar wails. The latter focuses more on a super catchy melody, adding some more raw elements to the song. Powder closed their short set, showing us that Gengahr definitely saved the best for last. What started off as a downbeat slacker anthem quickly turns into an anthem with a massive chorus which only gets better as the song went on. Their set was very well received by the crowd, hopefully pointing towards a slowly growing fanbase over on these shores. At the moment, that’s very likely and we’re definitely looking forward to seeing what else they have on offer.

Following a brief changeover, London four-piece Wolf Alice took to the stage in front of a considerably larger crowd. Opening their 30-minute set with 2014 single Moaning Lisa Smile, the Ellie Roswell-fronted band were extremely energetic from the start. Moaning Lisa Smile encompasses grunge-y elements alongside Roswell’s sweet voice and a catchy “ah ah ah” chant worthy of any festival field or tent in sight. With a debut album set for release this year, their set drew heavily on songs new and old including the instantlyrecognizable Blush. From the off, its guitar melody and Roswell’s vocals pull you in and don’t let you go until the song has hit full intensity. Elsewhere in the set, the powerful Storms cascaded through the speakers with maximum riffage and another anthemic, instantly recognizable melody line and chorus. Everything Wolf Alice do is fantastic, which means that their debut album is definitely one of the most hotly anticipated releases of 2015. Set closer Bros received a warm audience welcome, before the band left the stage to make way for Alt J.

Alt J surfaced some thirty minutes later as all the lights blacked out and Hunger of the Pine’s repetitive ‘bleep’ blared out of the PA. It wasn’t too long till the whole band made their way onstage, all four (including an extra live member in place of the departed Gwil Sainsbury) of them standing in one line at the front of the stage. With big venues come big productions, something Alt J definitely took with them. On the lower half of the wall were several video screens of differing sizes, with various different moving lighting structures hanging off of the ceiling. As Hunger of the Pine built itself up and tore itself down, the band went straight into the bass-heavy Fitzpleasure. From the off, everyone in the audience sang along to every word (something commonplace the whole show), as Newman and keyboardist Gus Unger-Hamilton harmonized ahead of a dirty bass drop. This bass drop was accompanied by percussionist Thom Green’s stellar drumming and the clattering of castanets. Something Good followed, upping the mood of the evening with a happy chorus and swirling guitar passage. Newman’s lyrics are always stuff of wonder, as they range from the simply beautiful to the downright absurd. “Matador; Estocada, you’re my bloodsport” he sang ahead of the uber-radio friendly single Left Hand Free. This track was composed simply to silence their label’s requests to make a song friendly for the US market, which they did by taking some standard blues chords and Hammond organs to create a catchy end product. Save for Newman’s voice it doesn’t sound at all like Alt J, yet live elements which make Alt J who they are definitely come to life during the song. An Awesome Wave’s maritime anthem Dissolve Me followed, as the whole room sang along to its closing line of “she makes the sound the sea makes knee-deep in the North Sea”.

Matilda was preceded by Unger-Hamilton’s eagerness for the whole crowd to do better than Paris in singing along, something which the 5,500-strong crowd did pretty well. “This is from Matilda” sang the whole room as Newman pointed in their direction when they were needed. It made for a nice bit of crowd interaction during one of the evening’s quieter moments. Bloodflood followed, which is a slow burning track that bears references to the Southampton common (“dead in the middle of the C-O-double M-O-N“). It’s one of the best songs on Alt J’s debut, so good in fact that they decided to add a second part to it on This Is All Yours. Aptly titled Bloodflood Pt. II, it starts off with demure piano and sharp, beat-oriented percussion before Newman and Unger-Hamilton’s vocals harmonize beautifully over its well known Southampton common reference. Texture is added by underlying brass, making this song even more worth crying to if the time and moment is right. KRS One’s Da Sound of Da Police is also referenced in the song, something which only Alt J can do and get away with. Old track Leon, which features on neither albums and was recorded very early on, made a brief appearance next as it whisked the listener away with swirling blue visuals in the background. The acapella Interlude 1 (Ripe & Ruin) proceeded to make way for Tessellate, a track which comes at you like a hammer to a nail with its deep, dark piano and percussion combo. “Triangles are my favourite shape, three points where two lines meet” murmurs Newman seductively, before Every Other Freckle goes all oriental on us with a sitar solo and some of the bands most absurd lyrics. “I wanna turn you outside and lick you like a crisp packet” sings Newman with an extremely serious look on his face, something which crowd members don’t quite manage.

Taro, Alt J’s best song by a country mile, follows in all its oriental glory as its signature riff sees their extra live member whack his fret board with a small roll of tape. From beginning to end, Taro is a thing of beauty. “Do not spray into eyes – I have sprayed you into my eyes” sings Newman again as the second verse sees Unger-Hamilton plonk away on a xylophone. Penultimate main set track Warm Foothills sees Newman put his guitar down as he whistles its happy melody, before The Gospel of John Hurt brings the main set to a close with intense energy and fantastic visuals. Alt J is one hit album away from pyrotechnics, especially if their current production setup is anything to go by. As the band returned to the stage, a demure cover of Bill Withers’ Lovely Day preceded the melancholic-yet-euphoric Nara. Nara is a Japanese city in which deer are worshipped, yet tonight everyone worships Alt J as Newman smoothly sings “love is the warmest colour”. A church procession-esque outro bathed in the repetition of “hallelujah, hallelujah” is too epic to put into words, before Leaving Nara does much of the work that the former did in a slightly more downbeat tone. Breezeblocks, their biggest hit on these shores, closes the evening in a different way to the one Alt J had intended. The band was left helpless towards the end of the song when all sound completely blew out. For about a minute they were completely oblivious to this, with Green drumming away with absolute focus. Despite this, though, the crowd proved their worth as they sang along to every single word and finished the song off for the band. Seeing 5,500 people all sing “Please don’t go, I love you so” in perfect harmony was a sight which left the band speechless and in awe as they left the stage to massive cheers.

In June, Alt J return to Holland to headline Best Kept Secret Festival, which will be their biggest show in Holland to date. If tonight was anything to go by, then June will be a special show for Alt J.