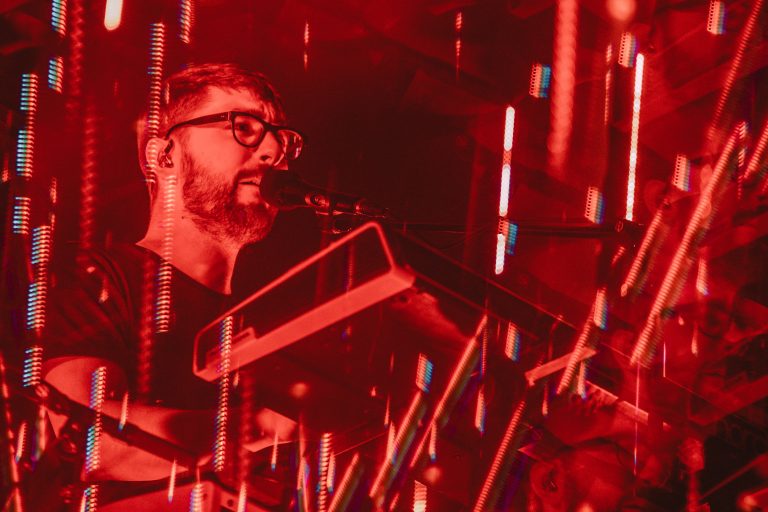 It’s been a good five years since alt-J last released music. The British trio sprung onto the scene ten years ago with debut album An Awesome Wave, confusing and enthralling critics alike with their minimalist, obscure indie songs. It won them awards, and allowed them to grow into modern behemoths on the grandiose This Is All Yours. In 2017, the far out RELAXER saw the band think so far out of the box that the box itself ceased to exist. Now, in 2022, they’ve gone back to basics on sprawling LP The Dream, a collection of sounds and ideas which sees alt-J back on top form. Jack Parker spoke to Gus Unger-Hamilton about the album, art and what’s next.

First things first: congratulations on The Dream, your first album in five years. You took a year off in 2019 – how different do you think The Dream would have sounded if the pandemic hadn’t hit?
I think it would have been a less good album. The pandemic helped evaporate all sense of deadlines, as we had no idea what was going on, how long it’d be going on for or if it would ever go back to normal. It felt like we could take as long as wanted, because there was no natural rhythm of releasing music. We spent eighteen months in the studio, so the album is a lot better than if we had rushed it.

The Dream sounds like a literal dream. With all that was going on in the world do you think that this album helped ground you as people and musicians?
It was good for us to have something to do during the pandemic. We felt quite grounded as we had our own studio, which was nice as we had somewhere we could call home. We could ‘work from home’ like everyone else, so we decorated the studio with old posters and such. It was a nostalgic thing but it also incentivized us and showed us what we had done in the past.

Looking back, is there a particular song from those Dream sessions which stuck with you?
Making Philadelphia was very enjoyable. It had a lot of different ideas, from the strings to the opera singer. We also rented a Hofner violin bass, as we’d been listening to a lot of Beatles tracks. We tried to steal a couple of their ideas too, but it turned out to be a unique song where lots happens.

How much has your approach to songwriting changed over the years?
I don’t think the approach has changed massively. We let the songs take us where they want to go; if a song is headed in a certain direction we won’t draw it back into an Alt J sound. We’ve never had a sound or a category into which we fit.

Get Better is a standout moment on the album. Can you tell me a little bit more about its origins?
It started off as something which Joe (Newman, vocals) sang at home for his partner, improvised. She recorded it and a while later sent to him to remind him of what he’s done. This was during the pandemic, and it like the lyrics and message could fit well in the current state of the world. The world has gone through a lot of loss and grief, unseen since possibly WW2. It felt like a nice way to pay tribute to everyone who’s worked hard during the pandemic. It’s a fictional story, not explicitly about COVID, but there are enough hints in there to make it sound like a pandemic song.

When the band first emerged you were met with cries of “obscure” and “unusual”. Ten years later and your sound has become defining for a certain niche of indie. How does it feel going from outsiders to frontrunners in a decade?
Thank you. It’s funny that there’s been this backlash; people calling us pretentious and such. The critical press either love the fact that we don’t fit into a box, or it annoys them because they just like artists who are easy to define as it makes their jobs easier and doesn’t challenge their preconceptions. What some people love is what other people hate, and there is rarely a consensus on the best art. The best art should piss people off.

Your experimentation peaked on RELAXER, an album which you’ve previously said was stressful to make and which you ran out of time for. Looking back, do you think it was necessary for alt-J to go all out in order to be able to make an album like The Dream?
You could say that, yeah. In a way I feel like we reached the end of a cycle on RELAXER, and for The Dream we reset this cycle. We went back to the basics of writing good, catchy songs. It was a healthy thing, and on RELAXER we definitely got something out of our system.

RELAXER also felt more like a studio record, whereas this feels like an album that needs hearing live. Was that intentional?
That’s nice to hear. We went back to basics on this album, simplifying things as opposed to having a 30-piece string orchestra. I wouldn’t call this a garage rock album but we definitely were trying to see what we could achieve by just playing our instruments without over-tracking. We always layer things but I wanted this to feel like an album that was being played live on the spot.

Charlie Andrew has produced all of your albums to date. What is it about working with Charlie that makes you gravitate back to him with each album?
Ultimately he is somebody who gets what we want to do. He’s on board with our whole “see where it goes”-approach too recording songs. He’s got a lot of musical knowledge – mention a style and he knows it. He has great contacts too, he’s someone who can make things happen. If you tell him that you want a medieval Crumhorn, he’ll find one through a friend of a friend! For obvious reasons this is great for us as musicians.

So do you ever envision yourselves self-producing?
At this point I can’t see why we wouldn’t keep working with Charlie as we have a great relationship. It would feel weird and I don’t see why we would take that risk. If it ain’t broke, don’t fix it.

Tell me a bit more about the artwork and general art direction on this album.
We asked our friend Joel Wiley if he had anything as he always has really good art, and the album cover was chosen as it was a bit unsettling. Just like our music, you’re not quite sure what you’re looking at. It’s warm, friendly and scary but also none of those things. We went for a more 1990s aesthetic, particularly with the typeface. I think it’s called Eurostyle; Radiohead also used it in the 90s. We’ve always been very open about our love for Radiohead.

Joe also directed the video for Hard Drive Gold. Has his directorial debut been on the cards for a while?
I think it has, and I think he felt like if he didn’t do it now he would never do it. He did a great job.

You’ve not properly toured in some three years. What have you got up your sleeves for the Dream tour?
We have an amazing light show lined up. The first show of the tour is tomorrow (25 February), so we’ve been in production rehearsals all week. It’s a 3D light experience! We’ll play a lot of new songs, probably more from one album than we’ve ever done before. Like you said, it’s an album that needs playing live. We’re going to do around eight songs from The Dream. It’s also been ten years since An Awesome Wave, so we’re gonna play some of those songs too. It’ll be a good mix of old and new.

With this being your first record in five years, how does it set you up for whatever comes next?
We’re so focussed on the new album right now but it’s very exciting to think what might come next. We’re at a crossroads now as our record deal runs out soon, but we don’t know what the future will hold. Whatever it is, we’re looking forward to it. The Dream is out now.