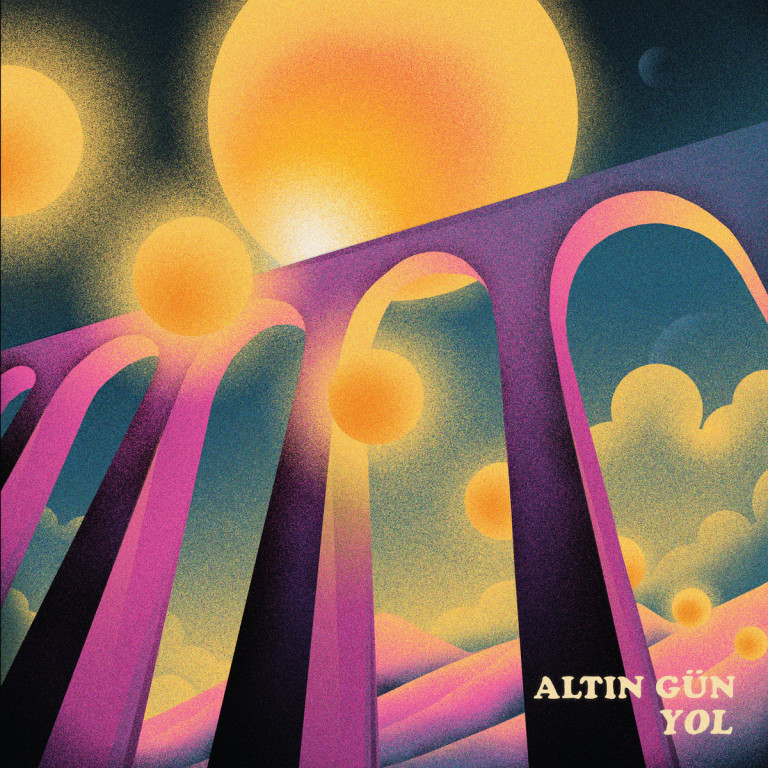 Altın Gün’s Yol: A Spaced Out Journey Into Synth Dreamland

There aren’t many bands out there right now doing what Altın Gün do. In fact, there’s barely any. The Dutch-Turkish outfit have been at the forefront of Anatolian music ever since debut album On burst onto the scene back in 2018. It was a collection of reworked Turkish standards; old folk standards brought back to life by means of pulsating rhythms, punchy bass lines and the hypnotic vocals courtesy of frontduo Merve Dasdemir and Erdinç Ecevit Yıldız. Its hotly anticipated follow-up Gece, which was nominated for a Grammy, saw them take their folk-y reworkings and add hints of synth and the lightest grooves to proceedings. Now, on third album Yol, the sextet have come full circle. Over the course of twelve tracks, they transport the listener to a sonic dreamland filled with wispy synths, ass-on-the-floor rhythms and enough soaring melodies to keep you going for days. It’s different, but at its core Yol is the essential Altın Gün album.

The brief Bahçada Yeşil Çınar sets the tone for Yol, its hazy thirty seconds serving as a prelude for lead single Ordunun Dereleri. Released back in November, this track marked the start of a new chapter in Altın Gün’s book by means of long drawn out synth passages, booming vocals and bustling background noise. There isn’t a guitar in sight, but unlike with other bands who ditch the six string it doesn’t even make much of a difference. Bulunur Mu injects funk into proceedings, alongside a bubbly 8-bit melody and silky smooth vocals from Dasdemir. It’s one of the band’s funkiest songs, with the percussion and founding member Jasper Verhulst’s bass intertwining nicely (as with the rest of the album, too). Ben Rider’s Western-like guitar passages add a bit of distorted contrast, a small distraction from the overload of synthesisers. Hey Nari makes good use of the wah pedal, but once again it’s the bass which stands out here. This track is peak Altın Gün, combining a catchy guitar lick with memorable vocal lines and a tantalising rhythm section. The six-piece have definitely nailed the party vibes on Yol, just listen to Yüce Dağ Başında. A disco banger complete with handclaps, cheeky melodica and an irresistible beat. 10/10. Kesik Çayır marks the end of side one, Merve’s smooth vocals underpinned by a minimal backing which features finger clicking, shakers and a wobbly, bass-heavy synth. It builds up over time, bubbling up until it’s ready to explode. It doesn’t quite explode, but it does morph into a beautifully groovy finale where an arpeggiating synth leads it to a fade out.

Side two is greeted by Arda Boyları. Merve’s vocals are angelic here as the track kicks off in all its gospel-like glory. It’s the closest the band get to recreating an old-school Turkish standard on Yol, Merve’s vocals initially only accompanied by a heavenly organ. It goes on like this for a couple of minutes before leading into new single Kara Toprak. Funky bass line? Check. Wah wah guitar? Check. Catchy vocal lines? Check. Kara Toprak is the ultimate Yol track. It’s got the laid out vibes which helped Ordunun Dereleri shine, but it also carries enough groove with it to get you moving. Sevda Olmasaydı throws a quirky guitar distortion into the mix alongside a classic Anatolian folk introduction. Much like Kara Toprak, it possesses all the qualities of a great Altın Gün. There’s an even en eerie whistle melody thrown into the mix, quiet enough that it doesn’t dominate but prominent enough to add another dimension to Yıldız’s vocals. Album highlight Maçka Yolları is Yüce Dağ Başında’s funkier older brother. This is peak disco and it’s perhaps the best song Altın Gün have written to date. It’s got everything, from a catchy melody and festival-ready bass lines to hypnotic vocals and layered percussion. There’s so much to unpack on this entire album when it comes to song construction, but that’s for another article. Penultimate track Yekte is more of what you’ve come to expect from the band, but with an added sense of grandiosity in Yıldız’s voice. No doubt Yekte will get you moving, and if it doesn’t then something’s wrong with you. There’s even a fade out and a fade in in Yekte, something which you don’t hear very often. Yol comes to an end on the silky smooth and poppy (by Gün standards) Esmerim Güzelim. A drum machine serves as the backbone to Merve’s vocals, which soar high and swoop low (and in the chorus harmonise with Merve’s multiple vocal layers). It’s a subtle and lowkey end to the album, and it works. It leaves you wanting more, yet it also leaves you satisfied.

In Turkey, Yol loosely refers to a way. A path or a road, if you will. And if we’re speaking of roads, then it’s safe to say that Altın Gün have come a hell of a way. Will they turn at the next lights or keep going? That’s anyone’s guess. There’s definitely a much greater emphasis on synthesisers and drum machines, and the pay off is absolutely worth it. Yol is Altın Gün’s best album; it doesn’t stray away from what the band do best, and also doesn’t seek to repeat what they’ve done in the past. Unique, but familiar. Yol is due on Friday (26 February) via ATO/Glitterbeat.