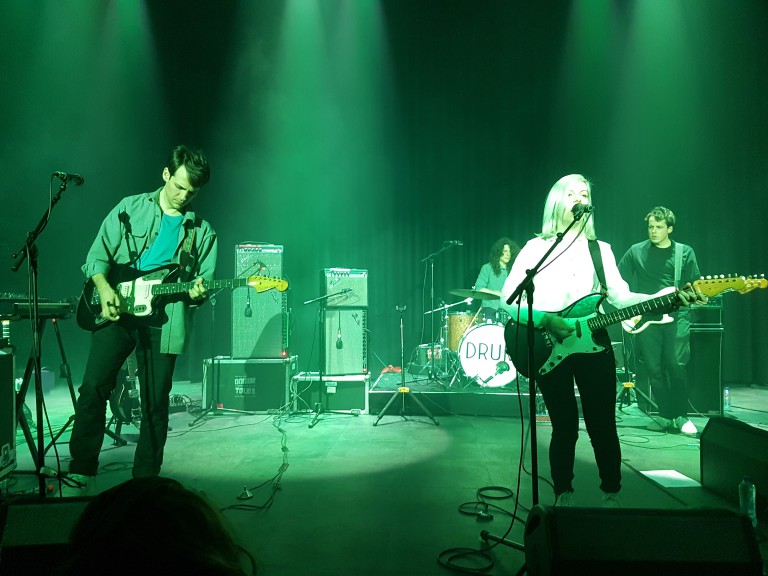 It was a diverse crowd in attendance for Canadian indie-pop stars Alvvays in Nijmegen’s Doornroosje. An inclusive crowd that had that an undercurrent of friendliness, respect and cardigans that you’d expect from fans of Alvvays’ dreamy gauze. As the weather began to show signs of spring, the timing couldn’t be better for the Toronto foursome to come to The Netherlands.

Spinning Coin were an apt support act, fitting into that same category of bands who channel the finer aspects of the Britpop so well. The two main songwriters behind the Glaswegian four-piece fight to pull their music in two different directions which get visually exacerbated when you see it on stage. While Sean Armstrong writes gentle melodies that recall bands like The Go-Betweens, Jack Mellin seems to be intent on upping the distortion levels to drag them closer to bands like Dinosaur Jr. Despite the very contrasts, the combination works, and it’s those diverging elements which give their sound a unique edge. Songs like Sleepless and Tin sounded particularly great live and if you haven’t heard them before, then definitely take the time to give their 2017 album Permo a listen. Shortly after it was time for the main event, the band we had been waiting for. A backing track played the band on stage with lights swishing in every direction as they took their positions at their instruments. They launched straight into the upbeat Hey, whose Devo-esque synths in the intro sounded crystal clear on stage until frontwoman Molly Rankin’s voice cuts through and the song transitioned. Its distinct progression from one style to another created a perfect set opener that smashes through with confident intent. The band look relaxed and self-assured as they powered through the song, which they continued through for the next and one of the highlights of their self-titled debut album – Adult Diversion.

Often when a band tour their new album, the songs haven’t yet had the time to settle in with the familiarity that can make playing them live feel satisfying on another level. It’s not something specific to a particular band, but just human nature to get more out of songs that have had time to sink into the subconsciousness of familiarity. You associate them with a time, you’ve played them to the extent where you know every note, every sound, every slight imperfection. However, now and again there’ll be a band who release an album that’s so immediately obvious in how good it is that these things don’t matter.

While the debut album from Alvvays was their breakthrough, last year’s Antisocialites was a whole new step up in songwriting quality. Almost self-aware of this fact, the next seven songs that followed were all taken from that album. Back to back highlights with songs like Plimsoll Punks and Not My Baby were received well by a crowd who couldn’t stay still throughout them. This was probably most apparent when the reaction to the opening notes of their ‘hit’ Marry Me, Archie in the latter half of the set was only mildly more pronounced than the universally positive reaction they were getting throughout. The high was long and consistent. One of the most unexpected aspects of the night was quite how good these songs sound live. Whether it’s the fact that these accomplished musicians nail every note that they play, or the fact that they have a charm that’s down to earth, and clearly look like they’re enjoying the whole experience of being where they are at that moment. “If we look grumpy, it’s because we were playing cards before we came on and she was winning.” Rakin said gesturing at Kerri MacLellan. A wry bit of pseudo anger. Any opportunity where she wasn’t singing, Rankin would take the opportunity to dance away from the mic with a reckless abandon while MacLellan swayed behind her synths looking on. Nothing choreographed, just someone so into the music that they couldn’t stay still.

The conversation with the crowd was minimal and stereotypically polite for these Canadians. Rankin made the announcement that drummer Sheridan Riley had been for a run that morning, before being corrected that it was in fact bassist Brian Murphy who had been for a run. When she asked Billy where it was, he could come up with no better answer than “A trail.” The band giggled at the confusion before Rankin cut through it all with “That’s just the sort of crazy band we are, cards and jogging”. For the encore, we were first treated to a cover of Blue by Elastica which opens with a droning guitar before making a sudden switch into a pogoing pop-punk song. The sudden transition made me think of Hey at the start of the set and wondered how much that novel intro had been an influence. They played a relatively faithful cover of the song though through their instruments and style it had had the edge taken off a bit, making it fit more with their blissful dream-pop style than the abrasion of Elastica’s original. It was followed by the closer Next Of Kin ending the set on a high.

I don’t know what my expectations were of seeing Alvvays live, but something about the entire package makes their music greater than the sum of its parts. They focused on the more upbeat songs from their back catalogue, clearly wanting everyone to let go and enjoy themselves. Played at loud volume, and watching these songs get recreated made me appreciate Antisocialites on a whole new level. Songs which I’d thought were fine on the album just made more sense in this environment. It’s great when moments like that happen, and if that isn’t what a band should be trying to achieve when playing live, then I don’t know what is.

Mobile phone images courtesy of the author. Antisocialites is out now.