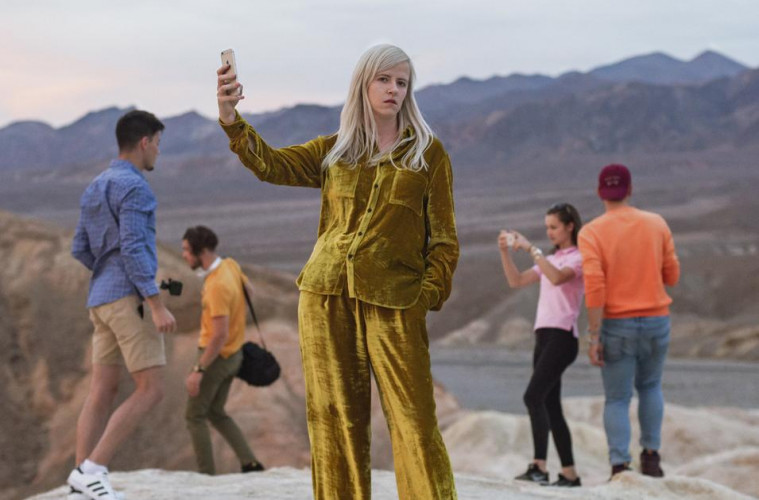 Amber Arcades Cleans Up A Little Too Much

Annelotte De Graaf, who records under the moniker Amber Arcades, is clearly an interesting and talented person. For her day job she works as a legal aid for the Immigration and Naturalization Service here in her home country of The Netherlands. Music isn’t her “one-shot”, she’s the sort of person resourceful enough that whatever life throws at her, she’s going to be alright. Most artists struggling to find a way to make their music plausible as a full-time endeavour end up taking far less interesting or virtuous jobs while trying to realise their dreams. She’s clearly a motivated person with a lot to offer.

Her debut album Fading Lines had a multitude of breezy hooks which were strong enough to get her signed to Heavenly Recordings. In writing the tracks, she self-funded a trip to New York to collaborate with a number of well-known names in the genre such as Real Estate drummer Jackson Pollis and Kevin Morby to create an unsurprisingly head-turning debut. These actions made it clear that this was not some casual side-hustle for her. It was an unexpectedly assured debut album though lacked a little distinction to make her stand out in a room of reverb-happy contemporaries. Her Cannonball EP showed a more assured, yet confusing offering as each track explored a different twist on her sound giving little away as to what the following album would eventually offer.

Gone is the excessive reverb, and in its place is a richer sound than what’s come before, with a wide range of instrumentation and 70s production elbowing out the dream-pop, with the reverb massively scaled back. There’s even a Rhodes organ on these tracks as though to drill the point home. The album’s theme is about reflecting on past relationships and retro-feel is supposed to back up that nostalgic feel. It may be a nostalgia of a production style that first occurred long before De Graaf was born, but it’s also a style that has rarely gone out of style and has been revisited by numerous artists since it was just the contemporary style, particularly notable on tracks like Alpine Town.

De Graaf has a knack for writing infectious hooks like the piano refrain that underpins the verse of I’ve Done The Best, which gets under your skin more so than its relatively pedestrian chorus. The instrumentation is rich and luscious throughout, with the orchestral touches, in particular, accentuating the tracks on which they appear. However, it’s when things strip back a bit that the album really shines. Where Did You Go brings some bite and lets things get a little looser which pairs well with De Graaf’s voice creating one of the album’s highlights. The simple guitar line of its chorus is enough to give you something to get excited about. Something’s Gonna Take Your Love Away thrives in its simplicity, giving De Graff less to hide behind and focusing on the strongest aspects of the song. It has enough to it not to need to build too much. Unfortunately though, some songs sound overproduced, evident right from the get-go with Simple Song’s horns which are so clean they almost sound artificial.

Another weakness that affects the album are the lyrics. They were less prevalent when De Graaf’s dreamy, reverb-soaked voice glided over the beautiful melodies, but now the vocal sits proudly front and centre. Not everyone has to be a David Berman but you do reach a point where the clichés almost become numbing. With European Heartbreak, De Graaf is keen to draw attention to its lyrical content exploring romance in the backdrop of Europe. Her descriptions of the complex emotions behind these songs clearly shows an understanding of the complexities of human emotion, but unfortunately, the words themselves choose to portray them in forgettable ways. She describes how they’re about “alienation, the fluid nature or memories and human concepts like nationality and the human condition”, yet there’s little to rouse you. The album opens on Simple Song, and it feels like a placeholder that never got updated rather than a statement of sorts. Featuring couplets like “I don’t know why we’re this way, keep it coming to keep me sane”, its title certainly doesn’t lie. For someone who seems so assured, is clearly thoughtful and clearly has a good idea of what she wants to say, you’re left hoping for more.

To many, these aspects will matter little since there are a number of well-written songs here that show De Graaf expanding her horizons as a performer. This is an incredibly well-produced collection of songs with a definitive theme that flows throughout. Unfortunately, it’s not enough to make the album memorable. For countless listens I struggled to remember the tracks I had listened to, just remembering the general pleasant feeling that washed over as they played. Perhaps the criticisms come from having too high expectations of De Graaf, maybe if I could hear this album without enjoying her debut so much I’d be more sympathetic to its safeness. For me, however, it’s resulted in my own European Heartbreak. European Heartbreak is due on Friday (28 September).