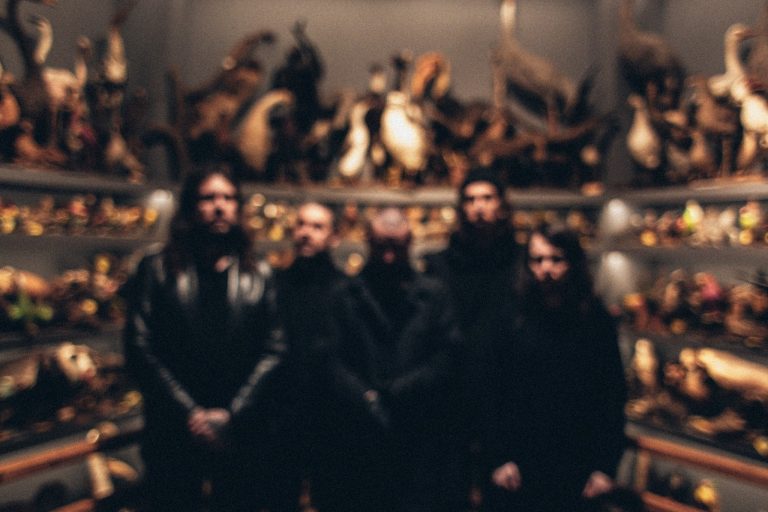 Amenra: “We all have our own thorns that we grow in order to protect ourselves”

Last week, the Belgians in Amenra released their hard-hitting new album De Doorn. Sung entirely in Flemish, the five-track behemoth serves as the band’s first ever release on the renowned Relapse Records. Jack Parker called up frontman Colin H. van Eeckhout to discuss the album, protecting yourself from outside harm and the power of embracing your mother tongue.

First things first: you’ve broken the tradition of naming each album Mass. Why do that and what makes De Doorn such a fitting title?
We always try to look for an image which represents what can be heard on the album. I had a fascination with thorns and branches, and I liked the idea that nature has created a weapon of its creations. I transposed that idea onto humans; we all have our own thorns that we grow in order to protect ourselves from outside harm. Emotionally it’s about trying to overcome things and find your place in life by managing whatever comes our way. It wasn’t a Mass album because it wasn’t born out of our own traumatic turmoil, which normally is the case. This time we were commissioned to write for the remembrance of World War 1’s ending, and we also created a live fire ritual here in our hometown of Gent. There we burnt the unacknowledged losses, and so we wrote De Doorn for this and not really for the sake of an album. We were very free in our process this time so it didn’t really feel like we were writing an album at the time.

A Flemish language album on Relapse Records is quite a bold move. How did Relapse react to you presenting them with this album?
We thought that, because when they signed us they assumed it was gonna be an English album. They trusted us and our judgement, though, and followed us in it. They didn’t question a thing but I can assume it was probably a mild shock when they realised the whole album was in Flemish.

It also adds a whole new dimension to the music. Why do you think it actually took so long to make this linguistic switch?
Probably because I grew up with an aversion towards my own language. Musically I don’t think I connected with anything Flemish or Dutch growing up, so I never really thought about using it to create something of a certain weight or with a sincere nature. Most of it was poppy or entertainment-based music, but by writing poetry and diving into the kleinkunst genre I started to grow an affinity with our language. The possibilities became even more refined and it became easier to work with wordplay and trying to be ingenious in your own language.

The Flemish dialect also works really well with your music as a backdrop. What is about the Flemish language which makes that combination with metal so appealing?
It’s hard to judge your own language because it just makes sense in our story. We try to be genuine and honest, and we try to portray ourselves as we are and not build any illusions around our personas. For us it makes sense to tell the story in our own language! Our international reach is bigger than it’s ever been and we’re on the biggest label that we’ve ever been on, so instead of being as universal as possible we tried to pull it closer to our skin and tell our story in the most direct way possible.

You mentioned the first World War earlier. Tell me more about the underlying stories which helped further shape the stories behind these songs.
It’s really an ‘album’ album. You have to take it in as a whole, because the dynamics of the songs influence each other which makes it hard to talk about the individual significance of each part. What I can say, though, is that it comes from a storytelling perspective. It’s something that you have to dive into from the beginning till the end. There’s a voice which talks to you from an abstract place and it’s trying to guide you through life. Image-wise the references were also in part determined by the nights we took part in to commemorate the end of the war, so for example images of war torn countries like Belgium and the Netherlands. Pictures of the mothers who lost their sons, people who had to rebuild entire communities. That loss is used as imagery. The things that I wrote for the fire rituals are meant for me to address the people present on each night of the commemoration. It’s about taking each other’s hands and walking through whatever barriers are put up in front of us as individuals while trying to overcome that feeling collectively. There’s a lot of narration on the album, and as I knew that there would be around 90% Flemish visitors during these nights I decided I wanted to talk to them in a language that wasn’t English.

Isolation has been a big part of our lives this last year plus. How have you coped with the mental strain of this pandemic and how much did it inform your songwriting on De Doorn?
De Doorn was written mostly before the first lockdown, we only did a couple of mixes during the pandemic, but we recorded other stuff during the lockdown period which definitely inspired us. It’s an interesting time for us personally, but the loss of humans and solitude has been a part of us and our work since day one. It’s not a new matter for a band like us to address; in fact, it only made more sense to release it now instead of waiting it out. This situation stimulated us to release the album.

So did you use this time to work on new Amenra music?
No. De Doorn has been out for a week now, and we’re not the kind of band who are driven to release something every six months. We have other projects and bands that we work with, but there was also Amenra-related stuff like artwork which we did have time for.

What shaped the visual side of the album? In particular the video for De Evenmens.
It was made for us by our good friend Vincent, who’s from Paris and is a part of our small circle. It’s very rewarding to work with people who know you and understand your world. You only need to talk about it to a certain degree to get something across. It would have been hard work to collaborate with another organisation or company on a video, because it would be hard to get them to do what we want. I was very grateful that Vincent was able to build the world around De Evenmens. There are some references to Belgian statues in the video, and all the creatures you see in the fire are burnt. They carry a certain ballast, or history, and you see them growing thorns for protection. The golden thorns, branches and blood that come out of the creatures also pinpoint the fact that, for humans, if it’s gold, silver or even metal it becomes valuable. Otherwise it’s just a branch, or it’s just blood. People need to stand still and realise that even the smallest things in life are the most valuable. That all ties in with how we live now, as well as the conclusions we draw from life.

There’s next to no metal sung in Dutch or Flemish at this moment. Do you hope De Doorn opens the door for more non-English metal to break through?
Maybe. I think we’re probably the first Flemish band to have an international following like ours, and that could possibly inspire other bands. I was talking with someone from another band who also sing in Flemish and they never realised that it was possible. It was always a big question mark for them, but I think it’s a matter of having your music tell enough of a story. It can become about sound and how we best bring something to the table. If people still understand what you’re talking about and what you mean then great. It’s very emotion-driven, and it’s very interesting to see all these different angles to a band. Every language is worth the attention, and I think you can always tell your story best in your own language.

So how does this set you up for what’s next?
We don’t really sit down and plan our future ahead that much. We just address the situation and do what we feel needs to be done at that moment. I really enjoyed writing in Dutch because I feel like I could put more weight in there, but that doesn’t mean that I will only write in Dutch from now on. I feel like we’ve taken something away from our international following, so I’m pretty sure I will try to work as well as I did in Flemish but in another language. It’s about challenging yourself and not just choosing the easy way out. I don’t know, though. We’ll just continue what we started twenty years ago and see where it brings us. There’s no big masterplan. De Doorn is out now.