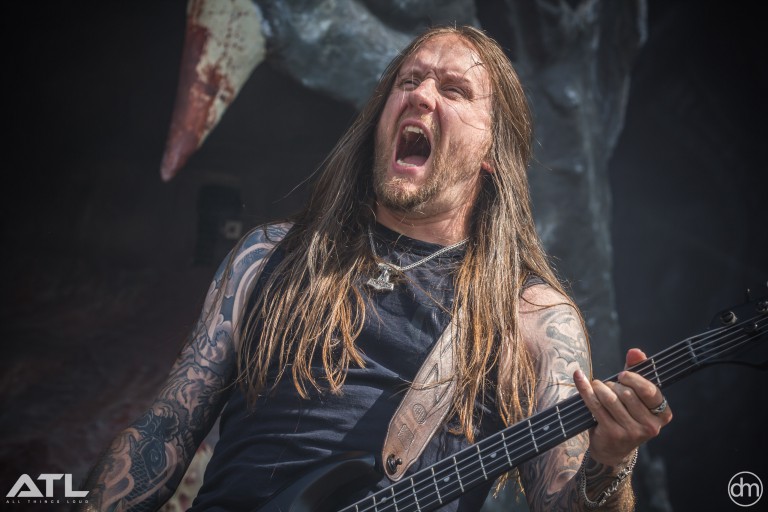 AMON AMARTH’s Ted Lundström: “History is written by the winners”

This week sees the release of Amon Amarth‘s eleventh studio album, Berserker. It marks the first time that the Swedish melodic death metal outfit recorded in Los Angeles, swapping the European cold for some West Coast sun in search of an album which tells a powerful story of heroism and perseverance. Jack Parker called up bassist Ted Lundström in his Stuttgart hotel room to discuss the album, its stories and maintaining lifelong ambitions.

Berserker – the eleventh album! It’s the follow-up to Jomsviking, and it hits HARD. Tell me more about what’s been going on in the world of Amon Amarth these last few years.
So we did the last album – Jomsviking – three years ago, and we’d been touring with that for about two years before we made a new album. We wrote Berserker a year ago, and it took us half a year to get all of the songs together. We recorded the album in Los Angeles this time, as we wanted to change things up a little bit from recording in the British winter. We felt like we wanted new experiences, and Los Angeles is very much a rock and roll town. There are lots of cool studios and great producers; we chose Jay Ruston, who also mixed our recent live album. We were very happy with the result after spending six weeks in the studio.

What did Jay bring to the table as a producer as opposed to a mixer?
Mainly the ideas he came up with. He wanted to work with a lot of specific guitar and drum sounds. We tend to work with a lot of guys who do death metal, but Jay has also produced pop music and other ‘normal stuff, so he had a very different approach to sound. We wanted to explore more 80s and 90s heavy metal guitar sounds, and we also tried some amplifiers which we hadn’t used before. Soundwise, Jay had a lot of ideas which we really liked. In terms of the actual recording, we did it song by song this time round. We’d have to have 95% of the song finished before we could move on to the next one, which was a very fresh approach. Usually we do it instrument by instrument. This meant that everyone was in the studio working every day, and that helped the energy remain with us instead of some people not doing anything for two weeks. With this approach we could go back and change things if need be.

What did this do to the band’s studio dynamic?
It felt really good! Everyone was very excited about being in the studio, and it created a whole new vibe. Berserker feels like more of a group effort, and not just a set of songs. We were able to bounce different ideas off each other in the studio, which also added to the feeling of a collective band energy. It was also the first time we recorded with our new drummer, Jocke (Wallgren).

There’s a song on the record about the Battle of Stamford Bridge. What compelled you to focus on that one in particular?
This was something that our singer, Johann, came up with. Someone came to him with a story about the last battle of the Vikings. History is always written by the winners, and this story is one that the British wrote. They wrote about the Berserker, and it had a pretty big impact. A Berserker is a powerful warrior, and the story tells us about how he would defend this bridge in England for such a long time and ensure that the Vikings were safe. It’s a heroic story, and it really fit our style visually and musically.

Your live show gets more and more ambitious with each record, and this summer you’ll make some huge festival appearances. What is it about playing these kinds of shows that really makes you want to push out the boat?
Heavy metal, and our music in general, is a lot about Viking mythology and other tales and stories, so when we do a show it’s not just about the music – it’s theatre. We tend to look to the bands we grew up with, like Iron Maiden and KISS, where music is the priority but you can also add to it and make the live show very theatrical. This is something we’ve always been into, and it’s very important. It’s the same with an album cover – there’s so much brainstorming to see what fits with our music.

So what about Berserker’s artwork?
This time we went to a guy called Frank White, who has worked with bands like Megadeth in the past. He’s very talented! We wanted to have The Berserker – the cool warrior – on the front, with a lot of detail. If you look closely you see everything on the artwork is connected to one of the songs. We looked at artwork from other big metal bands and noticed that, with the artwork and detail, you can listen to the songs and look at the artwork at the same time.

You’ve been in Amon Amarth since the very start, back in 1992. How do you maintain that drive and ambition after so many years?
We started 27 years ago, or something like that, but it’s been pretty easy as we just really love what we’re doing. We’ve been fortunate to be able to grow as a band all the time, and we’ve never really had down periods. On each album we grow a little more, which makes it possible for us to make better music and play bigger shows. As long as keep doing it like this, we’ll stay energised; this is my dream job.

Although it’s not necessarily in the mainstream rock eye as much as it used to be, history-themed heavy metal is still huge. Why do you think that is?
Stories and tales have always been very interesting to people, and it’s been like that since forever ago. You can still see this with TV shows like Game of Thrones and the Marvel movies people love watching. If you want to get away from working a 9 to 5 job and explore something else, then it’s like a dream world. You don’t have to think about the laundry, for example. This kind of escape is your time away from the world, just to have fun. For me at least, when I go to a metal show, I can get away from that.

What do you think of metal today then? Do you get to keep up with a lot of the goings on?
The scene is alive and good I think; there’s a lot of cool stuff coming up. It’s trickier today with the Internet, because so many more bands are there. It’s healthy, though. I try to follow it a little but with stuff like Spotify, because when I work I always have some music on and I’m always looking for playlists. Otherwise you get stuck listening to your favourite albums over and over again. I recently discovered a Swedish band whose name I can’t remember, but it was old school death metal. Berserker is out this week Friday (3 May). Amon Amarth headline FortaRock in Nijmegen next month.