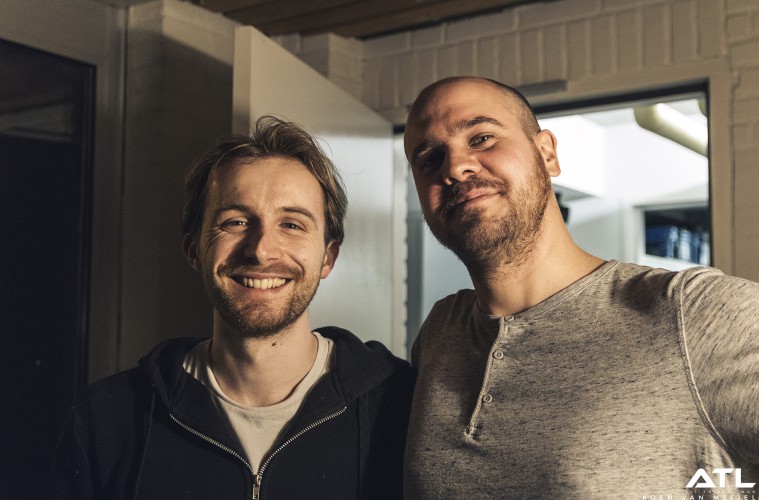 Last week, London’s Arcane Roots took to a sparsely packed Paradiso Noord in Amsterdam as part of their ongoing Melancholia Hymns tour. The run supports one of the band’s most intricate and well-woven studio albums to date, and it precedes a 2018 which couldn’t be busier for the trio. Janneke Stam sat down with bassist Adam Burton and drummer Jack Wrench to discuss the album, its underlying visual strengths as well as the new music which they’ve already promised for later this year.

Hey guys! How has the tour been so far?
Jack: We just did two weeks in the UK. [Support act] Brutus had to cancel, so The Hyena Kill stepped in. I don’t know if you’ve ever heard of them, but they’re an awesome band. It went really well.

Adam: Yeah, and then we headed pretty much straight to Europe, with a different support in the shape of the legend that is Jamie Lenman.

Yeah, how stoked are you to have him on this tour? I know I am.
Adam: I’m both stoked and kind of like “don’t fuck up, he’s your hero.” Reuben have been a big, big influence for years. We’ve played the same festivals as Jamie before, but never a normal venue or club show like this.

That’s awesome! Now, let’s talk about Melancholia Hymns a little bit. You’ve incorporated a lot of new elements this time around. Was the writing and recording process very different to that of previous releases?
Adam: Yeah! There was a lot of stuff that we were still learning how to do, to try to do it well and incorporate it into the songs. We’ve got new synths and electronic drums that weren’t there before, so the process was definitely a lot different. Traditionally, we would write music in a room, kind of like a rehearsal room, with just literally guitars and drums, but this time around – because of this whole expansion, these new things, we managed to do it at home. We were set up in Andrew’s house, in his conservatory, where he set up his computer, keyboard and other synth bits. The majority of it was actually hashed out there, as opposed to in a live setting. We would send each other bits, new ideas, over the Internet, work on it individually and then come back to the little conservatory. That was very different from the way we’d done it before. I think that, going forward, we might try to do it differently again. Maybe we’d get back in a room again where we can be loud, have everything set up and work on it as we go.

That makes sense. I imagine that, doing it this way, you’ll never really feel like it’s finished.
Adam: Yeah, exactly! That was actually one of the things we found. It was kind of difficult to know in advance. Especially when we were in that little room, it was obviously not “live” in the sense that we never wrote and recorded it how it would be performed. That was one thing that proved to be a difficulty. After we recorded the songs, we kind of had to figure out how we were going to play them live, which is not really the best way to go about it, haha! Did you encounter any specific hiccups in the recording process at all?
Jack: Yeah…haha. There’s always the trouble with trying out something so different. Like Adam was saying, every day is a school day. We were just learning how to do things and how not to do things. You’d spend three days working on a certain thing and then you’d get to the end and realise you’d set the bar. Then you’d have to go back and change everything else you’d already done, because you realised that you could do it better. I think that, in that regard, there were a lot of setbacks, but that’s to be expected when you’re new to that environment. We got there in the end, though.

Adam: I think that next time, we’ll definitely have a much better idea of how to do it. I say that now, but we’ll probably have this conversation in a year and I’ll probably say “Ahhh, we really knew nothing about it.” Haha!

So, with these setbacks in mind, it must have been both a relief and super exciting to release these new songs into the world. How did that feel?
Adam: Because this album was a step in a different direction, we weren’t sure. I mean, we weren’t worried about how people would receive it, but we could imagine people being like “What the hell is this? There’s no guitar!” There’s one specific song without any guitar in it on the album, and we just weren’t sure if people were going to be into it. But thankfully, it was the complete opposite. People seemed to really like it and not, like, turn their nose up at these new things we included, so that was really nice. I was pleasantly surprised.

Is that why you had been slipping some new songs into the sets early on, such as Curtains at 2000 Trees in 2016? To sort of ease people into the idea of a more electronic Arcane Roots?
Jack: Good knowledge, good knowledge!

Adam: That was the first time we’d ever played that song live. It was the first song that was written for the album and it’s quite far removed from our older stuff, so that was kind of a gauge to see if people would dig it. I could imagine people seeing Andrew’s set up with the synthesizer for the first time and being like “What’s that? What’s he doing?”

I can imagine! Now that everything’s been out a while, though, what would you say is your favourite song on the album and why?
Adam: I like Matter, because it combines the older riffing stuff that we all like and enjoy with the electronic stuff. It’s just fun to play live. It’s got this groovy verse to it and then heavy, fast riffing bits and I’ll just sit back and [nods head] nod my head. Whoever’s reading this obviously can’t see it, but I just nodded my head in a groovy way, haha.

Jack: I think mine would be Indigo. Mine changes a lot, to be honest, especially if we start playing one of the new songs on a tour or something. There’s listening to the record, and then there’s playing it live. Matter was everyone’s favourite at one point, purely because it was a lot of fun to do when we started playing it live. But yeah, since we’ve got Indigo under our live belt and we can actually play it now, I really enjoy that one.

With Arcane Roots, though, it’s never just the songs. Everything ties in so well together – the artwork, the lighting, the videos. Could you tell me a bit more about how that all came to be?
Adam: Well, luckily, over the years, we have connected with many, many, many talented friends. Andrew’s wife Sophia, who’s a very talented photographer and artist, did a lot of the artwork for the album and other visual things. She deals with most of that. On the video end of things, we have a guy called Miguel Santana Da Silva. What a great name that is.

Jack: He lives up to it!

Adam: He’s an all-round, general genius. Then there’s this other guy, Olly Jelley, who we owe the world to. He’s a very good and talented cameraman who’s filmed basically every video we’ve done over the last couple years. So yeah, there’s no other thought involved than our talented group of friends. Andrew is the main instigator in terms of direction. Him and Sophia kind of play off each other visually and the same goes for the lighting. Andrew’s spent many hours learning how to put on a show, as opposed to us just turning up to a gig and playing some songs. It is a lot of hard work, but we don’t really want to give these responsibilities to outside people and just keep it inside of our little friend group. Do you think that the UK music scene is very different to the one in mainland Europe?
Jack: I suppose so. I, personally, am quite in the dark with the European music scene. Every time we come over here and speak to a sound engineer or fans in, for instance, Germany and they’d say “Oh, that reminded me of this band.” I would just be like “Huh?” In general, the attitude towards music varies massively between countries. The way people in the UK react to the songs is so different to when you’re here in Amsterdam or Italy, or something like that. It’s crazy how different it can be, but we embrace it. In terms of the reaction to songs, or how involved people want to be. You’d play in Germany and it would be dead silent and you’re like “Oh wow, nobody liked that.” But then they’d come up to you afterwards and say “That was so beautiful, I was crying.” But yeah, I would definitely like to listen to more European bands. If we play a festival for instance, we always find so many good bands just by wandering around. So, anyone reading this, send us some recommendations maybe?

Who are your favourite UK bands at the moment?
Adam: Literally only because they supported us on a few shows at the beginning of the year, I would have to say Press to Meco. I’d never really listened to them before, but they were just such a joy to have. They’re lovely blokes and a really good band, great musicians. It was really fun to have them out and spending time with them. I think they’ve got a new album coming out in a couple of weeks. Free advertising there, Press To Meco!

Jack: I think we’re really lucky to have played with so many of the bands from the UK we really like. Press To Meco, for example, or Grumble Bee, who’s joining us on the second half of this tour. That music’s great. Oh, and Toska, if you’ve ever heard of them?

Yeah, they supported you last time you played here, didn’t they?
Jack: Yeah! They’re such a good band. We just force them to be our friends by taking them out on tour, haha. We’re lucky.

What will the rest of the year look like for Arcane Roots?
Adam: So far, it’s mainly festivals. We’ve got a festival in Romania, which will be really interesting and fun to do. We’ve never been that far out. Actually, no, we’ve played in Russia once! 2000 Trees, ArcTanGent, Download Festival in Paris, too. We played that last one a couple years ago and it will be nice to be back there again. What else, Jack?

Jack: Yeah, so quite a lot of festivals. We’ll definitely also be putting some new stuff out. There is new music on the horizon and I’m sure that will lead to more shows. At least you know we won’t be slacking off.

Will they be songs from the Melancholia Hymns sessions, or can we expect brand new material?
Adam: There’s definitely some new, and there’s some…old.

Jack: I think it’s pretty clear that we’re not really allowed to talk about it, but it’s so close now. Maybe by the time this interview comes out, you’ll already know.

Melancholia Hymns is out now, with more new music on the horizon soon.