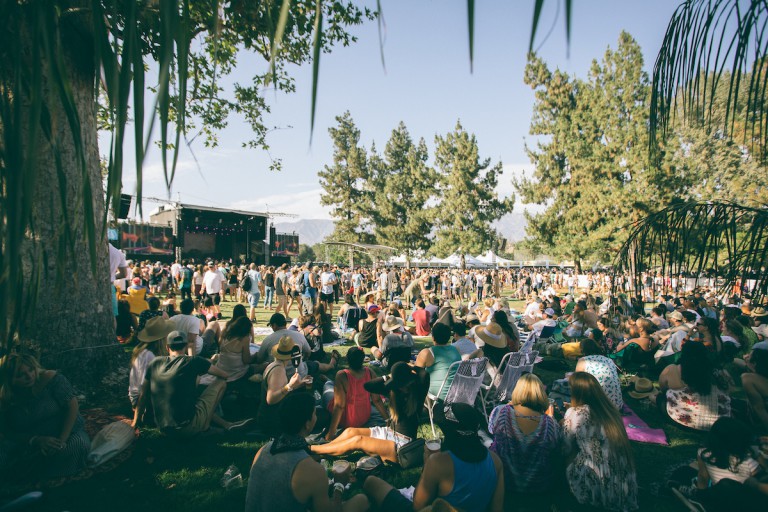 In its inaugural year, Arroyo Seco Weekend (named for the Los Angeles county in which it takes place, meaning “dry stream”) has yet to achieve household name status the way Coachella has. However, its organizers from Goldenvoice are anything but rookies to the festival game, and it shows. After Desert Trip was named the most profitable music festival in America last year, Goldenvoice spawned a smaller, family-friendlier cousin in Arroyo Seco Weekend.  Arroyo Seco Weekend’s lineup, featuring classic rock king Tom Petty and successful indie-folk powerhouse Mumford and Sons, brought a slightly older crowd than a typical music festival. Featuring a “food lineup” as well as a musical one, Arroyo Seco Weekend also boasted a children’s area and fancy drinks, both with and without alcohol. With free admission for under 10’s, the festival turned out to be a bit of a family affair, with picnic blankets spreading across the grassy areas in front of the stages.

The sun beat down both days of the festival, with temperatures in the 80’s and 90’s most of the day. Early on Saturday, Jeff Goldblum played a jazzy set with his brass band inside the tent dubbed “the Willow Stage”, delighting his audience with comedic interludes and slyly promoting a couple of his upcoming movies. Highlights included bizarre shout-outs to Christopher Walken and a bossa nova cover of American Girl in honor of Tom Petty. Broken Social Scene (all 17 of them) charmed audiences with the tumbling Sweetest Kill, and Dawes managed to get the crowd moving despite the sluggish heat when they broke out their hit Things Happen. While the majority of the festival was crowded around the main stage to watch the Alabama Shakes, New Orleans funk outfit The Meters attracted a smaller crowd of intent listeners. Though the Meters have never enjoyed blowout mainstream popularity, they are often considered one of the originators of funk but stay humble and good-hearted, poking fun at themselves along the way (“it’s the senior citizens club up here”). The festival closed out with a 2-hour set from the legendary Tom Petty and the Heartbreakers, who played all their hits to a backdrop of old footage of the band in their prime. American Girl came last, closing out the first ever day of Arroyo Seco on a high note as festivalgoers shuffled back to shuttles and cars to head home.

Around 2PM on the second day of the festival, the Mowglis brought festival-perfect hits like I’m Good and San Francisco to Pasadena as people sipped on horchata and watermelon-cucumber coolers in search of shade. The Revivalists, who started out as a Louisiana jam band and recently have been topping alt charts with Wish I Knew You, attracted a massive crowd. Lead singer David Shaw weaved in and out of the crowd every other song, backed up by guitars, synths, and brass. Fitz and the Tantrums played their brand new single Fool, a hook-y upbeat summer track infused with dance-club bass beats. As the sun began to set, things cooled off with a mellow set from multi-instrumentalist Andrew Bird. Blankets covered the grass and laps balanced plates of poke, acai bowls, tacos, and beers. Children sprawled in the shade for a quick nap. Stage decorations in the form of large paper flowers signaled the arrival of the Shins, who delivered a long set and encore, holding fans attention despite the start of Mumford and Sons across the festival before the Shins’ encore. The Shins also inserted an abridged cover of Tom Petty’s American Girl into their setlist. Los Lobos joined the Shins to perform The Fear, having covered the song earlier and “destroyed the original version” according to the Shins frontman.

Finally, the long-awaited Mumford and Sons delivered their chart-topping brand of folk-rock, and though Marcus Mumford aggressively demanded people in the back to stop sitting on the grass and dance, at least half of the younger children slept through their entire set. Maybe that was for the best, as Mumford’s vocabulary was grounded in a handful of choice curse words, and a couple of youngsters kept complaining that the air suddenly “smell[ed] like bad grass”. Arroyo Seco Weekend took the first step in bridging the gap between the middle-aged and the young, realizing the profitability in appealing to both sides.  The driving melodies of I Will Wait echoed across Pasadena as rocker Dads, hipsters, and children who have now seen Tom Petty before entering kindergarten enjoyed one last dance. The silhouette of a young girl on shoulders, maybe 5 or 6, was illuminated by the blue stage lights, arms outstretched towards the sounds of banjo and bass.