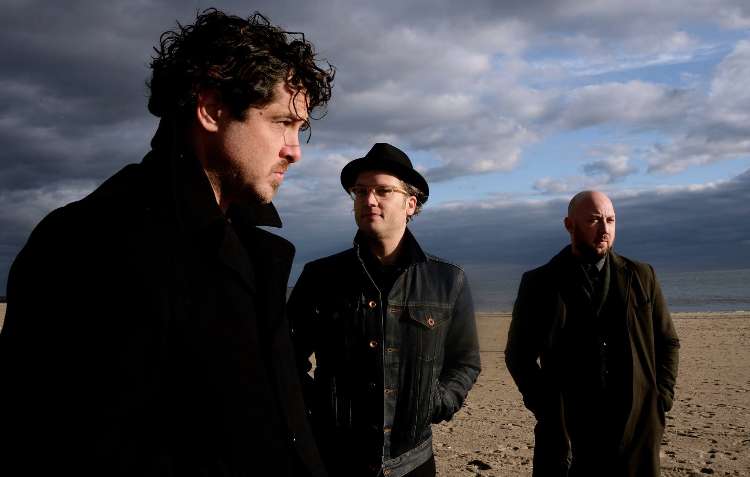 Augustines: “People are so obsessed with authenticity”

If there’s one word you could use to describe British/American indie rockers Augustines, then that word would be passionate. The Billy McCarty-fronted trio place everything they have into their musical output, and it’s definitely evident both on and off the stage. New album This is Your Life comes out on Friday, and we called up the band to discuss new music, a fan-funded documentary and touring with Noel Gallagher.

Hey guys. This is Your Life comes out on Friday. Can you tell me a bit more about the recording process and how the record came to be what it is today?
Rob Allen (drums): I’ll be as direct as I can. Bill is the primary writer, but Eric also had a say on this record. There were about fifty demos, and we picked and chose what we liked as well as what we could work on. Once we knew where we were going we sorted it out instrumentally; some of it was on computers and some of it wasn’t. Once it was ready to track, we got into the studio and worked on it.

What influenced the record from a musical and lyrical perspective?
Billy McCarthy (vocals, guitar): It’s influenced by feeling disconnected in a world that’s (at least in America) changing. It’s about feeling disconnected from myself and my country and feeling like an outsider. I travelled to Ireland, England and Los Angeles and tried to write. Where do I belong? We have Donald Trump in America, and it’s just a really strange time. I’d actually been living in Holland and it was amazing to see a society which functions with no problems! Musically we were loving Peter Gabriel, Men at Work and Kate Bush, as well as a lot of African music. We worked with some African artists on the record, too. We’re still the same Augustines that we’ve always been, but we’re trying out different things. Rock ‘n Roll is fatigued right now, just like it was in the 70s when you had soft rock. The 80s became very conceptual, an technology has helped us grow forward as an art form.

Which African artists did you work with, and what did they bring to the table?
Billy: A duo named Papa and Cher. We worked with them on vocals, and we had a choice between some of the people that we’d met. A colleague in Marseille connected us with some people in Senegal, and we were so lucky to meet them. There is a lot of truth in their voices.

So how does the new record stand out in comparison to previous ones?
Billy: It’s the here and now, it’s where are today.

And what logical progression do you see taking place with your musical development in the years to come?
Billy: That’s a good question. I listen to so much world music, and it’s really widened my palette. If you listen to Mexican music it sounds really cheesy, but that can actually be great. Even soul music can just mean making something with what you have; it’s not necessarily just the artists and the genre. It’s a bit like a really basic car which has had so much pride and effort put into it. In today’s world, everyone is obsessed by celebrities and we all have some sort of celebrity fetish – it’s doing nobody any favours. People are so obsessed with authenticity and things being organic, but if things are inorganic then that’s great too, just look at Ziggy Stardust. We’re just a bit bored with the radio, as well as Rock ‘n Roll.

A documentary about your music is expected later this year, Rise. Can you tell me a bit more about the project?
Billy: It was filmed over two years in 23 countries, and it follows both the American and British differences in our band. It goes to Rob’s beginnings in North London, mine in California and Eric’s in New York. It’s like you’ve got three bridges – the Brooklyn Bridge, London Bridge and the Golden Gate Bridge. It’s a beautiful metaphor.

Has it been something that you wanted to do for a while?
Billy: It was a crazy idea, but not something I would have come up with! We’re really lucky to have fans who have so much belief in us, something which the director understood and spent two years working on. The people who support us, our fans, actually raised all the money for it. The least we could do was invest our time.

Your live shows have been described as ‘intense’ by many. How do you keep this up on a regular basis when you’re performing upwards of 4/5 shows per week?
Billy: If I’m honest, it’s been difficult! I had to go to the doctor a lot last year for my voice. We kept it up a bit like Tina Turner does; commitment to entertainment and expression, and what music means to us. There’s a time and a place for music to be on a chair all stoic and saying nothing, but there’s also a visceral place for music to exist. For us, that’s onstage. We see the audience as a fourth member.

So what do you get up to when you finally have some downtime?
Billy: I ride my motorbike and catch up with friends.

Rob: I’m an aspiring ballerina, and I’m taking classes so that I can try to compete in the London regionals within the next two years. That’s a joke obviously. Downtime? To be honest mate, downtime on tour is pretty much rest and downtime off tour is pretty much like what Bill does. I travel if I can and just regroup.

You also toured with Noel Gallagher recently. How was it?
Billy: It was exactly how you would imagine it, and I say that with respect. Noel’s a hall of fame icon, and we’re a young and passionate band. There were a few nights where it was a massive success, and some nights where people clearly just wanted to see Noel. A band is like a house – if you take one from Arizona and put it in Manhattan, it might not fit. However, it can still become very beautiful.

This is Your Life comes out on Friday via Caroline International. Watch the gripping video for Are We Alive below.