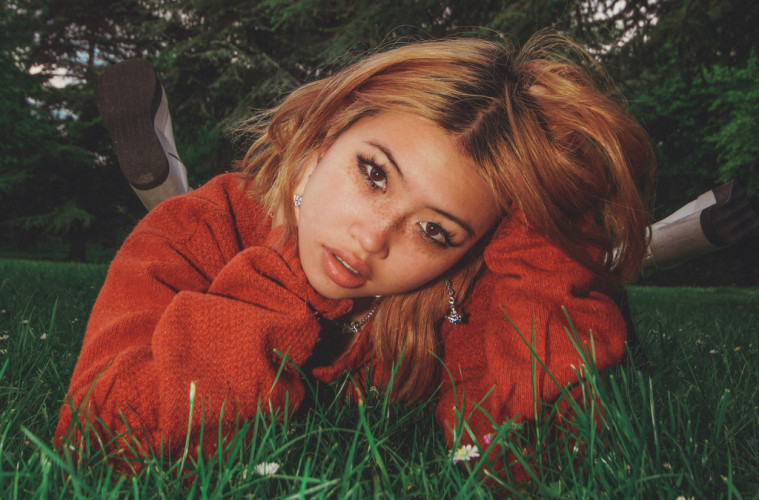 BEABADOOBEE: “I thought my hair was going to be blue until the day I died”

Alt-rock singer songwriter Beabadoobee has experienced a gargantuan rise in popularity during the last twelve months, her 90s-infused grunge pop striking a chord with a completely new generation of fans. Tours with The 1975 and a record deal with Dirty Hit have helped elevate her to modern day superstar status, a quality which is reflected in next week’s hotly anticipated debut album, Fake It Flowers. Jack Parker called her up to discuss the album, diversity in music and coping with fame at a young age.

How have you been staying sane during the pandemic?
It’s such a weird time, but I’ve been trying to stay positive despite the situation. I’ve been using it as an advantage as I haven’t had this much time off in a year because I’ve been touring. Now I can sit down and appreciate it all, which has been quite nice.

You had a lot planned, of course, including a show at Coachella. How did you come to terms with this entire situation at first?
I was so sad! I remember my manager telling me and I was just breaking down. I was so excited for this year and I had so much planned; I was going to play in some of my dream venues. It was a bit of a shock, but I’m hoping it’s going to be better in the future and that we can perform live soon because that’s what I miss the most.

Fake It Flowers is your debut album. Was it already done before the pandemic kicked in?
Yeah, it was finished prior to COVID-19 apart from one song. How Was Your Day? was recorded on a 4-track at my boyfriend’s house during lockdown.

Can you tell me more about how the record came together?
I have a habit of writing a lot, and when the tour happened I had enough songs in my head to fill an entire album. It felt right to write one seeing as I’d already done three EPs; I was ready to pour my heart out.

What vital lessons did you learn from the EPs which helped you put out the best album possible?
On every EP I did, I thought I knew myself the most. Especially on Space Cadet. I thought my hair was going to be blue until the day I died, I thought that was me. Then I toured, and I realised that I didn’t know myself as much as I thought I did. My sound developed during Space Cadet; I thought it would always stay grungy. I wanted to branch out and touch base with my older music and take inspiration from those other EPs. I found a lot of new artists who I’d gotten into. I just grew up a bit.

You’ve cited the likes of Pavement and Elliot Smith as influences, and your sound has made a huge crossover to more mainstream audiences. What’s your take on this second wave of 90s rock which has been doing the rounds this year?
I’m all for it. Guitar music should always be present, and it’s really important that females take dominance in that way. I’m inspired by loads of powerful women from that time – Veruca Salt, Hole, Alanis Morissette; they inspire me. It’s so encouraging.

A lot of the visual side to this album campaign has been lo-fi and analogue. Was done with the intention of tapping into a certain nostalgia?
I’ve always wanted my music to have a sense of nostalgia to it; something reminiscent of a certain time. My main collaborator – my boyfriend – and his friend Amir (Hossain) know me and the songs as much as I do, and that helps bring everything to life. Soren (Harrison) and Amir have both made every music video part of the world I wanted Fake It Flowers to be in.

Soren and Amir work on your music videos. What is your creative dynamic like when it comes to creating these clips?
I put a lot of creative freedom into it, honestly. Soren and I have grown up with each other, I’ve known him since I was 15. Him and Amir know me so well; they know exactly what I want when I show them a song and tell them what it’s about. It’s open to interpretation sometimes, and I also have ideas I like to put in there, but I trust them both to know me as a person and as an artist.

You’re on a label (Dirty Hit) with two other Asian-born or based artists, No Rome and Rina Sawayama. How vital is Asian culture for (British) music at the moment?
It’s nice to be part of a community that needs more recognition. I’m grateful knowing that I contribute towards it in that way, and I honestly think Rina and Rome are both so talented. They’re amazing, and they inspire me so much. There’s definitely a lack of Asian women and Asian culture in music, so I think it’s good that things like 88rising – which I did recently – bring light and attention to it.

You’re 20, and in the last couple of years you’ve experienced a massive surge in popularity. Have you encountered much difficulty in coping with all this extra attention at such a young age?
Yeah, definitely. At the start it was hard to understand the attention I was gaining, and only recently did I come to terms with the fact that I don’t really give a fuck. It was so hard for me to grow into that at the beginning, because I didn’t expect everything to happen the way it did. I think it all hit me a bit harder than it usually would do with anyone else. It’s important to utilise the support around you, and I have an amazing group of friends and family there for me.

The pandemic has obviously hit music hard. What can we as an industry learn from it moving forward?
There’s this whole idea that the creative industry isn’t taken seriously enough by the UK government. It’s important to realise that this is almost vital – you need creativity and passion to express yourself, and it brings a lot of happiness to people who get lonely. There’s also the lack of diversity, and festivals which lack female headliners. I find it quite surprising that this is still flagged as a problem; it has to be normalised that women should headline more festivals. There needs to be an equality there. There are a lot of flaws in the music industry, but I’m a hopeful person and I think it will get better. Especially with what’s happening at the moment. Fake It Flowers comes out on 16 October via Dirty Hit.