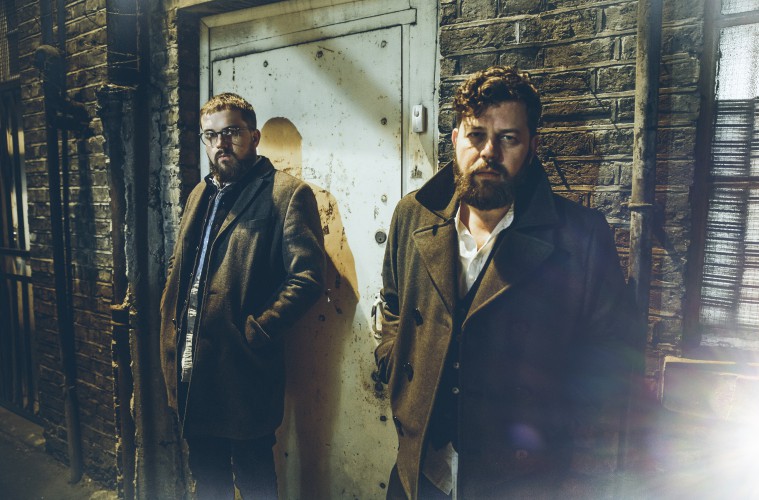 Bear’s Den: “We wanted to make an album that you could drive to at night”

Folk music. How hard can it be? When you look at the expanding influx of bands who operate within the genre’s wide boundaries, you wouldn’t be wrong in assuming that picking up a banjo is an easy path to success. For most people that’s also the case; see the stratospheric rise of bands like Mumford & Sons as a prime example. However, when you delve deeper into the inner workings of folk, you’ll find that tons more effort goes into producing a successful album than you’d originally considered. Bear’s Den are a prime example of folk’s second coming, with their continual success sparking some kind of European folk revolution which has now spread around the continent and subsequent planet. We sat down with the band (currently consisting of Andrew Davie and Kevin Jones) ahead of their set at Pinkpop Festival to discuss new album Red Earth & Pouring Rain, touring, India and more.

You’ve got quite a big following here as well.
Andrew: Yeah, we’ve spent a lot of time here and we love it.

Your new album Red Earth & Pouring Rain comes out in July. Can you tell us a little bit more about the recording process?
Kevin: We started recording the album in November with Ian Grimble producing it at Rockfield Studios in Wales. It’s this beautiful, great space with brilliant accommodation. It was really nice, and the place has a lot of history; Queen recorded Bohemian Rhapsody there. It’s a proper, old-school recording studio, and it gave us the sound that we wanted to create with the record as well. It was quite a fitting place to make the record.

What influenced it from a musical perspective? Did you draw from any new influences this time round?
Andrew: Yeah I’d say I think we did. We had this idea pretty early on that we wanted to make an album that you could drive to at night, and that it gave you those kinds of images. Whenever we were writing parts we asked ourselves, “does it conjure up that image in your head?” rather than asking what instrument it should be, for example. I think we really tried to capture and sustain that mood on the album. Influence-wise, yeah, Bruce Springsteen, Fleetwood Mac, Stevie Nicks away from Fleetwood Mac, Tom Petty; artists like that are heavily on our minds when making an album.

How about lyrically?
Andrew: We tried to write more in the present tense, and a bit less historically. Some of the sounds we use on the album are quite nostalgic, like soft synth pads and chorus guitars, which evoke 70s and 80s guitars and stuff. The lyrics, weirdly enough, are ‘now’ and ‘in the moment’. The first album was perhaps really reflective, like looking back on our childhoods. This one was more in the present tense. It’s ironic that there is this whole immediacy with the lyrics, but then a real vintage sound with the instrumentation.

So where does the title, Red Earth & Pouring Rain, come from?
Andrew: It comes from this old Indian poem. I spent ten days in India when we had some time off last year, and it was a pretty incredible experience. Have you been to India?

No.
Andrew: It is mental. Everything is different, all your senses are just blown away from the starts; all the smells, it’s all so different. Visually all the colours are so different too. I remember experiencing all that and not having any way of communicating how cool it was. I walked past this book shelf and found a book of Indian poems, and one of them had the translation Red Earth & Pouring Rain. I just remember thinking that it was a really strong image; the poem was beautiful, but it was particularly that image rather than getting lost in the poem or anything else. I thought about trying to write my own song just from that.

As we speak, the album isn’t out yet. However, do you have any idea in which direction you want to sonically progress afterwards?
Andrew: I’m not sure really. I don’t think we planned this one in that sense, as it was naturally what we wanted to do.

Kevin: We planned the record on a mood as opposed to a set of instrumentations. I’d like to think that we’d do that again. It’s like with our debut; the first album was one thing, but our live show started becoming slightly bigger. That was half the journey towards the second album, so when people who have seen us live before hear the second album they won’t be as surprised as people who have just listened to the records. The dream with the next album would be: make it, and then start touring it as the songs grow into new things. Then just wait and see where that sort of beast ends up. You choose your next step based on that. Did you work on this album with the live stage in mind?
Kevin: Not really, perhaps we should have done that!

Kevin: You always try to be as creative and imaginative as possible without thinking about how you’d play it live.

Andrew: We used to worry about that when we were just a three-piece; we needed to think about that. We didn’t want to be one of those bands who sound really good on record and then can’t do anything live. With this album we knew that there would be a bunch of us; we thought we might’ve needed an extra session player, but that’s now become two extra players. We definitely have enough hands to deal with the job.

So you have a full live band now?
Kevin: Yeah, six people So you’re not gonna be doing a Mumford & Sons anytime soon then?
Andrew: In what sense?

Plugging in the electric guitars, ditching the folk and going rock.
Andrew: Well, erm. There’s definitely some rock tunes on the second album, but there’s also banjo’s and acoustic guitars; a real mixture of different things to be honest.

Would you ever consider going down that path for a whole record?
Andrew: Yeah. I don’t think we listen to music based purely on the instruments. I understand why people do it, but it feels like a weird way to listen to music if you’re always saying, “do I like this? Has it filled the quota of this instrument?”

Kevin: It’s about seeing what someone’s got to say.

Andrew: Are you getting invested in the story of the song? Or if that’s not the ambition of the song, are you getting stuck in the rhythm? What is the band trying to do? Judge a song on what it’s actually trying to be, not on what you think it should be. You mentioned Fleetwood Mac/Stevie Nicks earlier as influences. Have your influences changed much over time?
Andrew: I think Fleetwood Mac have always been an influence for us. What’s really interesting about them is that their songs, if you remove some of the instrumentation, are just beautiful folk songs. Rhiannon is a story about a Welsh witch, and I don’t think it gets any folkier than that other than that it’s a big rock track to me. Even The Chain – that’s really bluesy, Nashville guitar playing at the start. Then it suddenly comes in, simple as, with just a kick drum. It’s brilliant, y’know; they’re a band that inspired both the first and the second album.

You mentioned that the songs have their own stories, but is there one overarching concept behind it?
Kevin: I like to think that the stories on each song all intertwine a little bit, and certain songs also go together. There’s a song called Roses on a Breeze and a song called Fortress, both of which are musically and lyrically connected.

Andrew: I think it’s all a mixture of autobiographical stuff. If you’re writing that kind of stuff then there’s always going to be some kind of crossover. I don’t want to say that there’s a direct “theme”, but there are definitely themes that bleed in and out of the songs. Much like the first album, I guess.