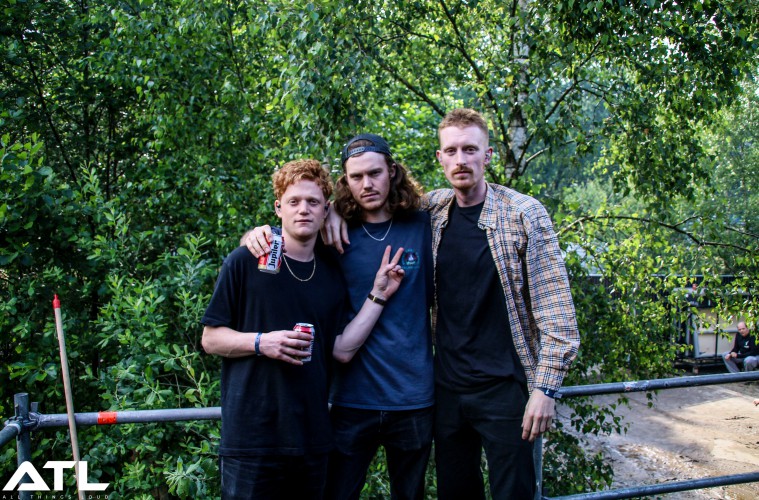 Beaty Heart Talk Us Through Their New Record

Last week, Peckham electro pop trio Beaty Heart put out sophomore record Till the Tomb. We spent the day documenting the band’s antics at Best Kept Secret in June, with multi-instrumentalists Charlie Rotberg, Joshua Mitchell and James Moruzzi talking us through each individual track on the record ahead of their successful set on Stage THREE.

FLORA
Beaty Heart: “It was the last song that we wrote, and the first one on the album. I think it’s all of our favourite, because we’re really happy with it. It went first on the record because I felt that it represented what we were trying to do in the clearest way. When I started writing the song I was listening to this Brazilian jazz singer called Flora Purim. The track might have had a sample in it at the beginning, which we took out of Purim’s voice. The name of the song was thus based around that.”

RAW GOLD
Beaty Heart: “That’s our most recent single, and it was co-written and co-produced by the guys in Jungle. We were talking to those guys at the time that we wrote it, and back then it was a wavy slow-jam. We played it to Jungle and they said, “we think it’s great, but we want to hear more of the bass”. We rewrote it, and then it turned into a bit of a disco banger. It’s Till the Tomb’s feral beast.”

GLAZED
Beaty Heart: “Glazed is actually the first song that we wrote for the record. James and I were playing around with the sample, and we found some chords which kind of set the tone for the writing process. Glazed kind of set the benchmark for the rest of the record. It’s kind of the first ‘proper’ ballad which we’d written, at least compared to our last album. Going straight into writing things like that changed everything I suppose.” TILL THE TOMB
Beaty Heart: “Till the Tomb is the title track. It’s not a particularly poppy song; it’s not gonna be a single or anything, but I do think that it sonically and tonally represents the album. It was another one of the first songs that we wrote, and it was quite a slow process at the beginning. Eventually, along with the rest of the tracks, it evolved and evolved. We worked with these really amazing brass players throughout the album, and this song was the starting point for brass sounds on the record. Part of the aesthetic of this record was to get a bit of a 70s-recording feel going; not necessarily in terms of writing, but more in terms of production and sound. The overall tone, basically.” SOFT LIKE CLAY
Beaty Heart: “Soft Like Clay was written in our mate’s basement in Peckham, which is where we’re from. We move around a lot studio-wise, which is because we’re constantly looking for new environments to work in. It was this run-down, dilapidated basement with bricks and dust everywhere, and it kind of inspired this fractured sounding poppy song.”

GOOD BUNCH
Beaty Heart: “Yeah, we had fun with that one. It’s more of a disco-inspired track. One of the main elements of that song is a gold lamp, which is one of Josh’s grannies favourite lamps. It had this really cool bell sound to it which he played a rhythm on and eventually sampled for the track. It’s the driving force behind the track, and it also features on a couple of other tracks. The lamp was a percussive experiment, and we ended up using loads more percussive elements throughout the track. It’s not one of the ‘key’ songs on the album, but I think it does have quite an important role.” GREEN GREASE
Beaty Heart: “Green Grease is another one that I wrote in my grandma’s house, which is basically just an old retirement home. I had to keep super quiet and I could only use whatever she had in her house to make a percussive loop, which turned into this dub track inspired by Lee Scratch Perry and a bit of Biggie. It’s a fun one to play live, that one; it’s one of the ones that’s going down the best, to be honest.” The band have a pre-show ponder. (c) Jack Parker

U SAY
Beaty Heart: “This one was originally called Wonky, it’s gone through many names. It sounds like drunken Elephants, almost like the track is actually wonky and tripping over itself. It’s got this really big brass saxophone sound.” SLIDE TO THE SIDE
Beaty Heart: “This song is the most reminiscent of the first record, and sonically it’s built from tools we used for the second album. It has this quite distinctive rhythm throughout the chorus, which was actually played on a radiator. It’s another one which we wrote in a dusty basement, and it’s a very raw sounding track with a sweet top-line.” DEATH METAL
Beaty Heart: “That one was written in Charlie’s old house, which was a huge abandoned office space. There’s a scheme in London where they put residents in big open spaces that they’re trying to sell to new residents. It was basically just a massive space, so we put all our gear in this big room which became our little studio for a while. I think it was really late at night when we wrote that, and we’d had a lot of Red Stripe. That house was so cold, so the track itself also has this really cold feel to it which is down to a chiming bell sound we made use of. We called it Death Metal because the track had a bit of a weird feel to it.”

Till the Tomb is out now. Stream it below.