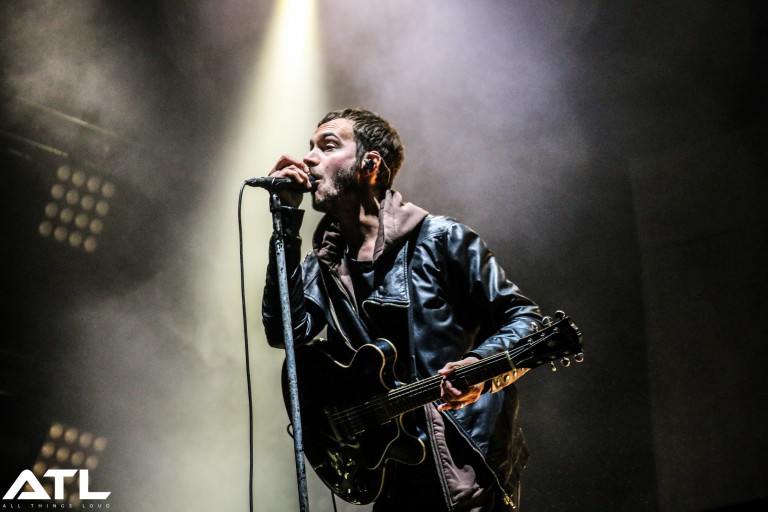 As 25,000 revellers slowly recover from the fourth edition of Best Kept Secret, it’s time to take a look at the fifteen best acts that graced the stage in Hilvarenbeek last weekend.

15. Two Door Cinema Club
What we said: “Over on Stage One, Two Door Cinema Club proved themselves to be a band worthy of headlining the whole festival as they previewed the October-bound Gameshow. Lead single Are We Ready? (Wreck) featured alongside the album’s title track, with the rest of the show a mere greatest hits collection. Popular cuts Undercover Martyn andThis is the Life featured early on, before Something Good Can Work and set closer What You Know further emphasized TDCC’s ability to pull out banger after banger. Had Jamie XX not been a suitable headliner, then Two Door Cinema Club would’ve been a perfect replacement. In fact, for most people they actually were. Best Kept Secret 2018 headliners, anyone?“

14. DIIV
What we said: “Dream pop outfit DIIV took to Stage One not too long after, making up for their cancelled April tour with a dreamy psych explosion. Opening on (Druun Pt. II), Cole Smith and co. drew heavily from stunning new album Is The Is Are, with standout track Under the Sun making for an extremely dreamy moment in the show. The band are no longer as intense as they used to be in a live setting; rather, the focus has shifted to a dreamy blend of psychedelia and pop which leans more towards Beach House than it does Beach Slang. Over on Stage Three, Danish synth-pop collective Liss performed their first major show on Dutch soil as they proved that all the hype surrounding them was well worth the anticipation.”

13. Weaves
What we said: “Canadian outfit Weaves opened proceedings on Stage Five, taking their witty dream rock to Hilvarenbeek and absolutely slaying the stage. Frontwoman Jasmyn Burke had the crowd in the palm of their hand as they hung on her every word, all the way from catchy banger One More through to new single Tick. There’s a big future out there for Weaves, that’s for sure.”

12. Nozinja
What we said: “African dance/music collective Nozinja ended the day in truly wacky style, proving that there really is something for everyone in Hilvarenbeek with their frenzied African dance music.”

11. Fat White Family
What we said: “Alongside Best Kept Secret’s five stages, food stalls and market lies an almost hidden stage in the depths of the forest, which for the first time ever served as a location for 3voor12’s annual live sessions. Nestled just behind Stage Two, the Secret Garden featured 15-minute sets throughout the weekend from the likes of Weaves, Ezra Furman and Sunday evening’s main attraction: the Fat White Family. Kicking off twenty minutes late, four of the band’s six members performed three tracks for a sizeable crowd. Older tracks Touch the Leather and Is It Raining In Your Mouth? both received a stripped back treatment, with frontman Lias Saudi dressed as a soviet minister drinking what looked like rum. Final track Satisfied saw the four members loosen up a bit more, before leaving the stage altogether and preparing for a late set on Stage Five which almost saw Saudi destroy the stage. Taking to the stage as a six-piece, the Fat Whites drew heavily from new album Songs For Our Mothers as Saudi rolled around on the floor and covered his back in mud whilst kicking monitors. As per usual with a Fat White Family show, the band didn’t quite seem to be all there; however, that’s the charm which this band offers. None of the members are relatively normal onstage, making it all the more exciting to witness their live show’s unpredictability.”

10. Glass Animals
What we said: “Oxfordshire indie pop outfit Glass Animals took to Stage One at the height of the day’s obscene weather conditions, performing tracks from upcoming sophomore album How to Be a Human Being. Lead single Life Itselfwas an early standout, encompassing African groove rhythms and funky undertones as frontman Dave Bayley wailed his way through the track. Once the new record comes out, it’ll be inevitable that Glass Animals will conquer one way or another.”

9. Destroyer
What we said: “Destroyer followed Air over on Stage Two, with Dan Bejar bringing a big band along for the stunning ride they went on. Set opener Bangkok slotted perfectly into following track Chinatown, both songs alone proving that the fuzzy-haired Bejar and his band are absolutely stunning to watch. Brass was a big part of the show, with Destroyer’s saxophonist on complete top form. The tent was packed, the vibe was there and the show was just purely unforgettable.”

8. VANT
What we said: “Over on Stage One, the tables were completely turned as London-based rockers VANT took to the stage to spread messages of societal downfall and hope. The Matty Vant-fronted quartet were (save for Vant himself) all dressed in matching binary outfits, spending 45 minutes absolutely tearing the stage apart with enough energy to last a lifetime. Vant dedicated early track Put Down Your Gun to victims of the tragic Orlando shooting, before later on in the set urging anyone with English friends or family to vote to remain in the EU. The music is simple, essentially mixing the best elements of Cage the Elephant’s rawness with The Kooks’ accessibility and a punky attitude. It may not be the most logical combination on paper, but it certainly works.”

7. Unknown Mortal Orchestra
What we said: “Back on Stage Two, the Ruban Nielson-fronted Unknown Mortal Orchestra took last year’s Multi-Love to Hilvarenbeek for a sprawling, 60-minute long set in front of a full tent. Set opener From the Sun, which is taken from Multi-Love’s predecessor II, instantly introduced elements of funk and soul as Nielson took to interjecting the set with multiple guitar solos. Percussionist Riley Geare stood out during the set with his precision-filled drumming, even silencing the tent as he pulled off a majestic drum solo early on. Set closer Can’t Keep Checking My Phonesent Nielson and his band off into a victorious daze, with the frontman very much aware of the fact that the band had absolutely mesmerized Stage Two. And quite rightly so, because rare breeds like Unknown Mortal Orchestra don’t come round very often.”

6. Samm Henshaw
What we said: “Over on Stage 3, Samm Henshaw played one of the day’s most exhilarating shows as he hit Hilvarenbeek with a solid dosage of blues rock, funk and soul which climaxed early in the magnificent Autonomy (Slave).”

5. Wilco
What we said: “Back on Stage Two, spiritual headliners Wilco performed an extremely solid and captivating set, one which could’ve been twice as long had the band been able to play every single track on their setlist. The legendary sextet performed 20 tracks in the end, opening on the upbeat More… and reaching its finale (The Late Greats) via the likes of The Joke Explained’s catchy vibes, Heavy Metal Drummer’s intertwining instrumentation and Impossible Germany’s twinkling atmosphere. Just like Two Door Cinema Club, Wilco would have also been perfectly capable of headlining Best Kept Secret’s main stage. However, Stage Two seemed the perfect fit for a group of legends who have never looked more comfortable than they do today.”

4. Beaty Heart
What we said: “Over on Stage Three, London electro-pop outfit Beaty Heart took to a full tent as they performed tracks from upcoming studio album Till the Tomb. The trio, all of whom were bathed in dense purple lights, were vocally on-point and musically tight to the point that everything could have even been pre-planned (it wasn’t, but the band are so on form together that it could be). Set closer Flora swathed the crowd in electronic vibes, with the percussion skipping beats and the chorus soaring far and wide over the enthusiastic crowd. It’s taken some time, but it finally looks like Beaty Heart are getting somewhere after so much hard graft.”

3. Beach Slang
What we said: “Back on Stage Five, Pennsylvanian punk outfit Beach Slang performed the first raucous set of the weekend. Despite fitting better onstage at the Vans Warped Tour, frontman James Alex and his band still pulled a full tent which was packed with dedicated fans before the show even started. The band specializes in the type of punk rock which pulls at your heartstrings so much that you’d feel inclined to start crying after the first chord. “This is our last show of the tour, so thank you for rocking out with us” declared Alex early on, with standout track Bad Art & Weirdo Ideas making for the most exhilarating moment in the show. This definitely isn’t the last you’ve heard of Beach Slang, that’s for sure.”

2. Rat Boy
What we said: “Over on Stage Five, English kid Rat Boy performed one of the day’s best (and most chaotic) sets. From ska-flecked upbeat tracks to in-your-face punk bangers, Rat Boy (who hails from Essex) had it all. Even his own cameraman ended up crowdsurfing as a result of an absolutely chaotic wall of death executed by Rat Boy himself. Sounding like a more bratty and raw version of Jamie T, Rat Boy is definitely heading in the right direction.”

1. Editors
What we said: “Editors took up the task of headlining Stage One, heading up their first ever Dutch festival. Outside of the Holland/Belgium region you couldn’t even consider Editors as a headline band; in the Benelux, though, Editors are massive. Last year’s In Dream was accompanied by three sold-out shows at the Heineken Music Hall, with the band selling some 16,500 tickets across all three nights. When the band took to the stage in Hilvarenbeek, the heavens instantly opened and a hoodie-clad Tom Smith took to the stage alone for show opener No Harm. The set, which drew heavily from In Dream, featured all the hallmarks of a stunning Editors show: pyrotechnics, fireworks and enough passion and energy to make other bands jealous. Editors are an absolutely sublime live band, something which they further proved with the fire-laden Sugar, emotive The Racing Rats and set highlight Papillon. The hit single is extended to an 8-minute long epic onstage, culminating in a near-rave situation which saw not a single soul standing still. It can only go one way from here on out for Editors, and that’s upwards.”