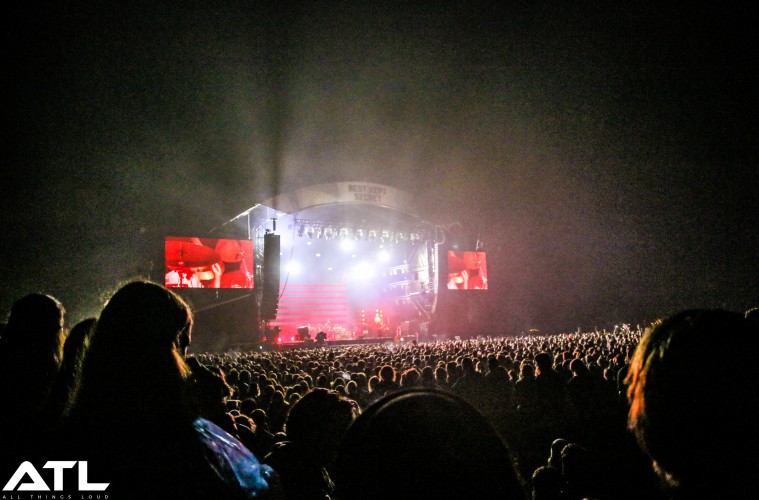 Best Kept Secret Festival; you’ve probably heard of it somewhere throughout the last five years if your musical port of call sways between making new discoveries on the daily and enjoying some established greats, many of whom have passed the test of time and elevated themselves into even higher musical stratospheres. The Hilvarenbeek-based weekender will mark its fifth edition with an absolutely stellar line-up which sees Radiohead, Arcade Fire and Run the Jewels top the bill. It’s the biggest line-up they’ve ever been able to put on, but that doesn’t mean that the attention has shifted away any focus from what Best Kept Secret truly stands for: new discoveries. We’ve scoured the line-up and handpicked our favourite acts who we think ought to be your discovery of the summer. After all, Best Kept Secret hasn’t been lauded by many as the best Dutch festival without good reason.

SLØTFACE
There’s no denying that poppy Norwegian punkers Sløtface have made one hell of a name for themselves throughout the last year, rising to prominence thanks to catchy singles Take Me Dancing and Empire Records, both of which are surefire pit openers and party starters. Pronounced ‘Slutface’, their debut album Try Not to Freak Out comes out in September via Propeller Records. Check out new single Magazine below, and make sure to catch them on the festival’s first day in exactly one month (Friday, 16 June).

IGUANA DEATH CULT
If you’ve been into the local Dutch indie scene lately, then you’ve probably heard of the wacky lads in Iguana Death Cult. The Jeroen Reek-fronted outfit like to combine slacker rhythms with lilting riffs, both of which fuse together to form a live show which leaves no stone unturned and more often than not makes for absolute carnage. Last year, they supported fellow BKS performers King Gizzard & the Lizard Wizard at the legendary Paradiso, and this year they’re appearing at a whole host of huge festivals, including Best Kept Secret. Get down and dirty with the band before you end up regretting it. ZEAL & ARDOR
Blues and black metal isn’t usually a combination which you’ll find on the same track, let alone being put out by the same artist. Zeal & Ardor is an example of how anything is possible, though. The New Yorker, real name Manuel Gagneux, has a knack for combining soulful vocals with the grittiest and filthiest screams and absolutely enchanting guitar lines, all of which form a final cohesive whole that leaves the mind in absolute confusion. It sounds like the love child of a dirty Norwegian black metal band and New York’s finest blus vocalist, a pairing not as impossible to pull off as it sounds. Zeal & Ardor may well be the most exciting crossover band around right now, so get yourself down to Hilvarenbeek if you really want to see it in action.

FIL BO RIVA
If there’s one thing which Best Kept Secret seems to be booking plenty of this year, then it’s the obscure singer-songwriter. If you look up and down the entire billing, you’ll notice an abundance of crooners each with their own unique capabilities, however you probably won’t come across anything similair to FIL BO RIVA. Filippo Bonamici initially started the project out by himself, and now he’s accompanied by two “like-minded souls” who have helped him bring his brooding, haunting songs to life in a way which is nothing short of mesmerising. He may not exactly be a singer-songwriter anymore, but you can still find Bonamici’s own heart and soul at the root of each track. Listen to Like Eye Did below.

SECTION BOYZ
Who doesn’t love a good old dose of grime, huh? Rap and hip hop have often been under-represented at Best Kept Secret (only a small fraction of the line-up tends to be represented by these genres) however Run the Jewels’ headline set this year (on the Friday) aims to put a stop to that. This includes the addition of South London’s very own Section Boyz to the bill, a collective who have set the UK Rap scene on fire since they first emerged on the scene in 2015. The six-piece have already collaborated with the likes of Chris Brown and Skepta, and also operate in the same circles are current hot exports Stormzy and Boy Better Know. Grime hasn’t exactly blown up yet on Dutch shores, but Section Boyz are here to change that and kickstart a rap revolution. Best Kept Secret 2017 takes place between 16 and 18 June in the Dutch Hilvarenbeek. Weekend, Saturday and Sunday tickets are sold out, but you can get your Friday tickets here.