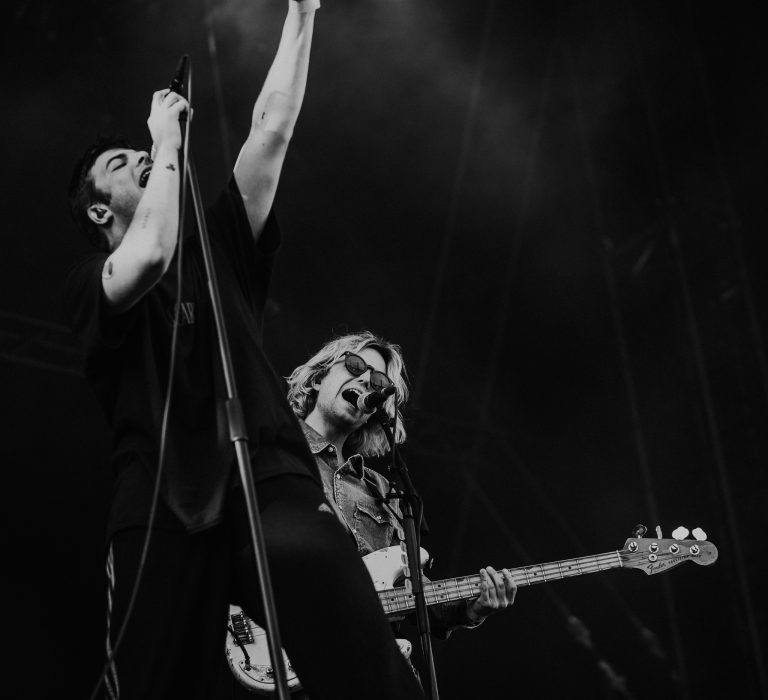 Day two of Best Kept Secret 2022 and the sun gods have smiled upon us all. Joining the beaming heat and sweltering temperatures were more fans than the previous day as the swarth of The Strokes fans brings up both the attendee numbers and the average age. L’Rain was first to play in the mid-day sun, despite a leg injury seeing her seated for the entire set. It didn’t matter though, her experimental jazzy sound was captivating enough that it still sounded exquisite despite it all. Her sound was notably more traditional live compared to recorded, which makes sense considering how her production is part of her sound, and the increased accessibility gets a good turnout for the early set.

Over on stage two Sef & Het El Salvadore Ensemble delivers a set that can only be described as “fine”. Not bold enough to be provocative, not boring enough to be angry about, but not good enough to feel anything positive towards. My lack of Dutch language knowledge may have meant that I didn’t understand all the words, but I’m pretty sure that they were along the lines of “We can all do this together, the world, you and I, forever”. You get the vibe. I regret missing Walt Disco for an officially needed Nice Little Sit Down™, having assumed from the name that it was a sleazy 50-year-old DJ in a leisure suit winking at whoever was closest to him, but later discovering that I couldn’t have been further from the truth and they slayed. Next time, Walt Disco!

Pip Blom were the first I’m-not-going-to-miss-this-one band of the festival for me, and they brought the energy up with their fizzy indie-punk, taking things to another level thanks in no small part to the wild energy of Gini Cameron on drums. Sure enough, Pip Blom have some unquestionable bangers like Keep It Together, and they sound just as big on stage as you’d hope, but hearing their songs one after another, the sameness of it all gets a little grating. When one of their tracks comes up on a playlist, it slaps, when you listen to 45 minutes of Pip Blom live, you’ve heard enough Pip Blom. As the number of sunburnt people strolling around the site increases, Boy Pablo match the sunny vibes of the atmosphere with their amiable yacht rock. Frontman Nicolas Muñoz can’t stop beaming as he rattles through the call-and-response sing-a-long trope of audience interaction. There’s some good stuff there, particularly when he channels Mac DeMarco, but there’s something offputting about their whole children’s TV show vibe that reaches its peak with some choreographed goofy dancing from the band at the end of the set. It was at that point I had to leave.

The second tent was packed for the start of Froukje‘s set, and when she launched into Groter Dan Ik, those not in the know suddenly realised why. It was a devastatingly great start to the set and one that makes you realise why she’s now selling out venues like AFAS Live. The intensity didn’t let up for the second track Onbezonnen either, but unfortunately, the rest of the set couldn’t match the energy of those. As each other song came on, there was a slight deflation that it wasn’t as good as the last. By the time she was alone on stage with her acoustic guitar, I knew it was time to move on.

I was excited for dEUS, mostly for the nostalgia, but also because even in their later albums there are usually a couple of good moments. Quatre Mains sounded visceral as the opener, and Tom Barman was clearly bringing his A-game in terms of energy. As always, the biggest responses came for the songs from the first three albums, and at this point, they are far closer to a conventional rock band and a long way from the art-rock of their earliest albums. Even Fell Off The Floor man sounds so conventional in this format to its unhinged original. The atmosphere was soured somewhat by a boomer mansplaining to my wife that her filming some of the set meant that she wasn’t enjoying it in the proper way, then proceeding to “dance” into us for the rest of the set to show us just how much he was enjoying it. It was an infuriating moment that almost escalated further, but we decided to move to somewhere else in the crowd to allow this nice guy to enjoy the band his own way. The mood was improved again with a rendition of Suds & Soda to close out the set, but by this point, it’s a reminder that their best material is so far behind them that they just can’t push the same buttons that they once did. We only catch Big Thief from a distance as our hunger is too real to put off any longer, but hearing Not from a distance invokes a massive feeling of FOMO that no flammkuchen can subdue.

Next it’s up to Fontaines D.C. riding on a wave of three back-to-back killer albums seeing them taking things to the next level with such a prestigious slot. With reports of an incident with the guitarist walking off after 3 songs in their festival set in Switzerland the day before, there are concerns that they could once again be at the breaking point they faced when over-touring Dogrel years ago. None of this shows in their performance though, where the band all play with an intensity and unity that makes the songs sound even more massive than they do on their recordings. It’s rare that a band’s newest material connects so much so soon after its release, but hearing songs like Jackie Down The Line sound just as satisfyingly intense as earlier album tracks like Too Real and Televised Mind. A torrent of googly-eyed ballons was unleashed on the crowd before the former, an unexpectedly light-hearted moment for a band so serious in their identity and image. It’s amazing hearing how many highlights they’ve created across just three albums, and you wonder what the limit is for a band like this who is on absolute top form.

The real highlight of the day for me was Metronomy. It wasn’t the first time I’d seen them, and the performance was relatively low-key compared to some of their past stage setups, but with so many albums of great songs by this point of their career, the setlist is an absolute beast and doesn’t even cover all the best bits. The reaction is helped by a feverish audience ready to dance or bounce to anything and a change in pace to the guitar-heavy bands that had preceded them. The reaction to The Look was so wild from the audience that it prompted frontman Joseph Mount to comment that sometimes when they play that song it’s a good time, sometimes it’s not, but this time was one of the best. I’ll bet he says that to all the safari park festivals. There’s so much variety in their sound, whether it’s the Funky Town homage Salted Caramel Ice Cream, or the instrumental tracks with synths and drums alone, there’s so much going on that it’s hard not to get caught up in it all. It leaves the crowd buzzing on their way to see the headliners of the day The Strokes.

The Strokes, however, sucked. You wonder why they’re still going when they have such clear disdain for what they do, and their set still draws mainly from their debut album from over twenty years ago. The lighting is low, and the between-song chat confusing as the band seems to be coming to terms with the existentialism of their age and whether you can really call yourselves hipsters in your forties. Only the front speakers are turned on, excluding a large part of the crowd from hearing the set any louder than a conversation. I get that there’s an appeal to the rock n’ roll image of not giving a fuck, but The Strokes aren’t rock n’ roll. They have one sound, and they do it well enough that they’re headlining a festival. They’re festival headliners. They said yes to this and get paid handsomely for it. Even though they started playing 30 minutes after the start time, and finished at the normal time regardless. They’re not edgy, they’re just sad avatars of a band that people were once excited by. Julian Casablancas clearly would prefer to be playing with The Voidz now, and at this point, they’re a far more interesting prospect than what The Strokes bring. I say this as someone who was sincerely looking forward to hearing them, but in retrospect, I wish I’d just put Is This It? on when I got home.

Beach House continue the trend of performing in silhouette rather than showing themselves, which is nothing new to their dream-pop ethos, but after 3 songs I have to leave because at this time the music is too low-energy to keep things going. That’s not a criticism of them, they were sounding great, great enough to make me want to revisit their latest album again after finding it a little boring, but it just wasn’t the best timeslot for them to be playing. A day of highs and lows, certainly, but that’s what festival season is all about.