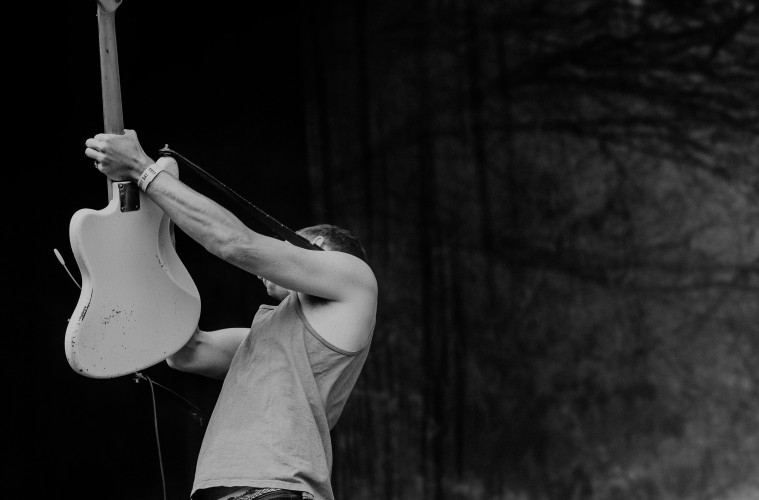 There’s quite a lot to be said about the way in which Best Kept Secret pieces together a timetable. The Dutch festival’s second day found itself dealing with more clashes than one may have desired, and yet it still managed to put on a day which was so diverse and entertaining that there was something for everyone at every turn. It was also a day which found itself accompanied by absolutely simmering heat and sweltering temperatures, something only made a little bit more bearable by the presence of an enormous lake next to Stage ONE. Following on from a Friday which saw Arctic Monkeys reclaim the throne, it was up to The National to try and top it. Joining them across Best Kept Secret’s multiple stages were the likes of Wolf Alice, Warpaint, Mattiel and Wavves. Jack Parker and Steven Morgan are in Hilvarenbeek.

Atlanta, GA’s Omni kicked off the day on the elusive Stage FIVE, which finds itself compacted into a dark, sweaty corner of the festival site. The grim, faux-industrial surroundings of this stage ultimately lent themselves extremely well to the band’s jangly post-punk, which flitters between bedroom garage jams and bombastic, pulsating riffs and melodies. On new album Multi-task, the band manage to produce a sound which borders on a sense of frenetic reckless abandon, something which comes to life in their live show and which resonated with the full crowd. It was a day of full crowds for most artists on show, with singer-songwriter Isaac Gracie‘s serene musings ensuring that Stage TWO was packed to the rafters with well wishers and newfound fans. Dutch artist Nana Adjoa took on Stage THREE in the meantime, and it was her introverted indie pop which served as the perfect accompaniment to the simmering heat festivalgoers had encountered. Her music is sickly sweet on record, but live it carries with itself a sense of brooding intimacy which draws the listener in like a moth to a flame. Dutch artists can sometimes become overshadowed at festivals like Best Kept Secret due to visitors being no more than a stone’s throw away from their next set, but Adjoa faced little difficulty in ensuring that all eyes were on her in a packed THREE. JP Aussie sibling duo Angus & Julia Stone brought the sun to Stage ONE, kicking off main stage proceedings with soothing cuts from new album Snow. It’s an interesting choice of album title for a duo whose home country is devoid of such weather conditions, but perhaps it indicates comfort in stepping out of their comfort zones. Clutching at straws here, of course, but what can be said of their set is that it was everything Hilvarenbeek needed: breezy melodies, slick harmonies and enough sunshine to last a lifetime. If it was the Stone siblings who brought the summer to Hilvarenbeek, then it was most definitely Nilüfer Yanya who got rid of them with her intricately constructed bedroom pop. Yanya is a vocal powerhouse who weaves intimacy and bombast with utmost care and compassion, culminating in songs which stick within the confines of your mind for hours on end. She turned out to be one of the biggest surprises of the day, much like you’d expect from someone with so much hype surrounding them. Wolf Alice are a band who like to kick things off with a bang, so when technical troubles on Stage ONE gave them a false start, they were understandably frustrated as they left the stage for roadies to work it out. It was the right decision to make, as the English four-piece exploded into their set for take two with next level intensity. Their set was a relentless barrage of high energy punk-fuelled rock that managed to get your pulse raising even if the sun had other ideas on how you should be spending your afternoon. Songs like Don’t Delete The Kisses and Yuk Foo sounded amazing blaring out of the ONE sound system, while bassist Theo Ellis looked visibly pleased whenever he caught someone singing along. It all got too much for frontwoman Ellie Rowsell by the end, as she finished the set by running from the stage, through the audience and straight into the lake for a swim. JP & SM There are two ways of cooling down from a Wolf Alice show: a) take a dip like Rowsell herself did, or b) space out to the dreamy sounds of Slowdive. The seminal English shoegaze outfit treated a packed TWO to songs from their most recent self-titled effort, which served as a true return to form for a band who had been gone for far too long. The older cuts from albums like Souvlaki Space Station may have been most anticipated, but it was newer track Star Roving which proved to be the ultimate highlight. Over on Stage FIVE, Georgia’s Mattiel rocketed through a short-but-sweet set filled to the brim with über-catchy rock and roll, making her one of the highlights of the day. Judging by the crowd’s reaction, you could say that this was unanimous on all fronts. Mattiel Brown’s voice is one to be reckoned with, as is her onstage energy. The band around her are extremely tight, with a special mention reserved for drummer Jordan Manley, whose expression of energy knows absolutely no bounds. Set highlight Count Your Blessings received a rapturous applause from the packed tent, and quite rightly so as Mattiel made for one of the weekend’s most enthralling sets thus far. Back on Stage TWO, The Internet picked up on a lacklustre start with funk-infused RnB, ultimately being rewarded with maximum engagement from an excitable crowd. New single Roll (Burbank Funk) stood out, incorporating an ongoing percussive and rhythmic groove which got the crowd dancing like there was no tomorrow. Thankfully there is a tomorrow, because LCD Soundsystem are headlining it. JP I’d heard great things about Warpaint live, and over the course of their three albums they’ve gone from strength to strength. However there was something about their Best Kept Secret set that just didn’t click. There was nothing wrong with it per se, but you can never underestimate the sequencing of bands at a festival and by that point my dream-pop quota was full. Not even the beautiful Love Is To Die could shift my funk as the band worked their way through a set drawn heavily from their last two albums. It was when I arrived at Stage TWO for Vince Staples and heard him powering through new single Get The Fuck Off My Dick that I knew this was what I’d been craving. Armed with nothing but a microphone in front of a wall of video screens, there was no lighting on the man himself, leaving him as a silhouette prowling in front of the scenes behind him. His music instils a sense of paranoia which is amplified by this stage setup. The bass was suitably intense in volume as his breakthrough classics Norf Norf and Blue Suede got the crowd moving. The screens themselves seemed to show an assortment of footage, sometimes innocuous, sometimes unsettling, but constantly changing without context or explanation. Vince has fast moved from exciting new artist to hip-hop powerhouse over the course of four years, three albums and an EP. On the strength of this performance, he’s still got a lot left to say. SM The National have never quite garnered the same level of popularity in The Netherlands as they’ve enjoyed elsewhere, and to some they were a relative surprise choice as headliners for the Saturday. Their bookish charm may not appeal to all, but there’s no arguing that they are amazing at what they do, and opener Nobody Else Will Be There was the perfect way to prove that. Frontman Matt Berninger has gone from strength to strength as a performer, commanding the crowd’s attention as he physically accentuates every word coming from his sultry voice. His words are often auto-biographical, yet the band have found a way to communicate the intensely personal to arena sized audiences. It’s clear that the audience were with the band though, with an audience-sung rendition of Vanderlyle Crybaby Geeks showing just how many people care about what they do. One of the highlights of the day was undoubtedly WAVVES. Clashing with The National was no mistake, as this isn’t music to quietly contemplate – this is music to bounce around the place to. They got King Of The Beach out early to get the crowd riled up and barely dropped the pace throughout from there. The front of Stage THREE was a bouncing mess of limbs and crowdsurfers as the audience got into it instantly. Frontman Nathan Williams had to ask the crowd to be careful as there was no security to catch them. In reply a pair of crutches were thrust into the air letting them know it was going to be alright. At one point, Williams found a wallet on stage and somehow managed to find the owner and return it despite having no idea how to pronounce their name. “Van der…” was the only coherent part. The atmosphere just seemed to get crazier as the set progressed, and by the time Williams introduced “a song we wrote for Grand Theft Auto V” the entire place was moving. The band seemed visibly pleased with the set by the end, and as the last notes rang out, most of the audience bum rushed the Casbah stage to check out Dune Rats, leaving the slow ones (me) behind and unable to get in. SM