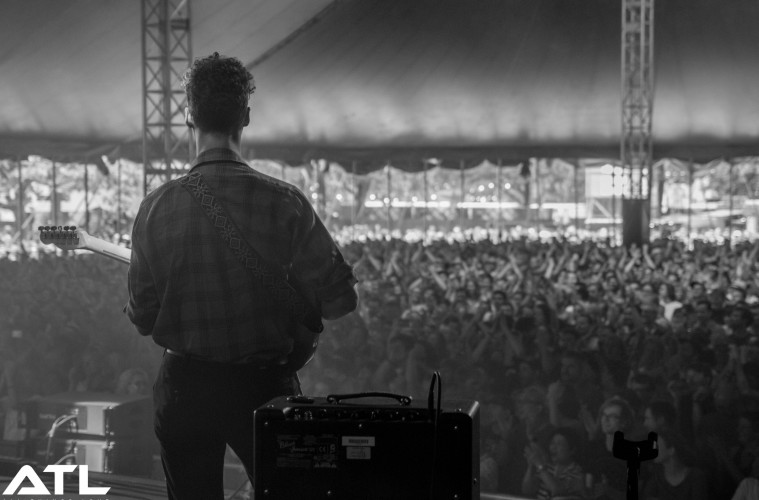 Earlier this morning, Best Kept Secret unveiled the entire timetable for its sixth edition, set to take place in June. The Dutch weekender will once again boast a line-up packed with some of the most exciting new indie bands, as well as a whole host of established greats. This year’s billing features headliners Arctic Monkeys returning to Hilvarenbeek alongside James Murphy’s legendary LCD Soundsystem and introverted rockers The National. Together with an undercard which features CHVRCHES, Future Islands, Superorganism and Rex Orange County, you could suggest that Best Kept Secret has once again put together a line-up to rival all of their mainland competition. We’ve scoured the timetable to analyse the three toughest clashes, which are sure to get hearts pounding and legs moving at rapid pace come June.

DEERHUNTER vs NAAZ vs ALTIN GÜN

The first clash on our list contains three extremely contrasting artists who all find themselves at different points in their careers. Atlanta’s Deerhunter have paved a successful path for themselves over the course of the last seventeen years, blending multiple strands of drugged up indie rock into one coherent whole and morphing along the way like a sonic chameleon. Most recent studio album Fading Frontier already dates back to 2015, with a new one due – their seventh – due this year. Don’t be surprised if they treat the Best Kept Secret crowd to a handful of new songs when they appear on this year. TWO, 21:30.

Dutch vocalist NAAZ, on the other hand, has barely got an EP to her name. That hasn’t stopped her from making plenty of waves, though. Her sickly sweet voice, underpinned by subtle beats, has enabled her to amass 1.7 million listeners on a monthly basis through Spotify alone, with debut EP Bits of NAAZ set to increase that figure by the day. What started off as a simple bedroom project has now elevated itself to a fully-fledged pop success story in the making, and if you head to her set at Best Kept Secret you’ll find out exactly why. THREE, 21:30.

The prior two names are both fun to check out if their respective styles are up your street, but if you’ve come to Best Kept Secret to have a great time then there’s only one place you need to be on Friday night: Altin Gün‘s show on Stage FIVE. The Dutch-Turkish folk collective formed not even two years ago after Jacco Gardner bassist Jasper Verhulst experienced Turkish musical culture, recruiting a set of skilled musicians (among them two traditional Turkish vocalists) to tackle obscure national folk music in a groove-laden jacket. From start to finish, Altin Gün get the crowd swaying back and forth on their feet, and at Best Kept Secret you’re absolutely guaranteed to experience this too. Make the right choice and check out Altin Gün. FIVE, 21:30.

MOGWAI vs SUPERORGANISM vs THE MAUSKOVIC DANCE BAND

There isn’t an awful lot about Scottish post-rockers Mogwai which shouldn’t get you excited, because a band of this stature are a sight to behold. Groundbreaking new album Every Country’s Sun found its way into multiple year-end lists in 2017, once again solidifying their status as a band who can quite literally do no wrong. Live, their jarring guitars and entrancing rhythms intwine to create a sublime whole which echoes through the room and remains lodged within your skull for hours on end. If this how you envision your Sunday in Hilvarenbeek going, then you know where to be. TWO, 21:30.

Superorganism are undoubtedly the hype band of the year, and on their self-titled debut album they’ve had an incredibly good stab at a potential contender for Album of the Year. The London-via-New Zealand collective blend irresistible pop sheen with jangly indie, all of which is underpinned by an extremely colourful and well thought out visual aesthetic. Combined, the result is nothing short of fun, pleasurable and just unbelievably happy. With all the disdain and unrest going on in today’s hyper digitalised world, Superorganism are the kind of band everyone needs to help lift their spirits. If they – and quirky vocalist Orono in particular – can’t do that, then something’s wrong. THREE, 21:45.

If Altin Gün’s set on Friday night was exactly what you needed to kick off your weekend in style, then The Mauskovic Dance Band are exactly what you need to help end it. Fronted by former Altin Gün percussionist Nic Mauskovic (a man of many talents), this project serves as one of his many vibrant musical offshots, among them a stint with Jacco Gardner, with whom he also forms duo Bruxas. If you had to describe the Mauskovic Dance Band’s music in one phrase, you’d be hard pushed to find something which suits them better than “hypnotic analog dance music“. This is also how they describe themselves on Facebook, so you could safely suggest that it’s pretty accurate. Phrases don’t define enjoyment, though, so just go and see for yourself. FOUR, 21:30.

Now, this is just unfair. Although Father John Misty and Preoccupations operate in extremely contrasting musical worlds (folk-infused indie rock vs post-punk), there’s a definite overlap within their respective fanbases which will ruffle quite some feathers come 10 June. On one hand, you’ve got a singer-songwriter whose ego sometimes reaches higher heights than his actual music (both a good and a bad thing), and on the other hand you’ve got one of the most gripping post-punk bands in modern history. Both have new albums out this year, of which they’ll each draw from plenty in Hilvarenbeek this summer.

The only thing we can honestly suggest in dealing with this clash is to pick your best pair of trainers and prepare to run between stages to catch the best moments of each performance. It’s a long trek from Father John Misty’s set on ONE to Preoccupations’ on FIVE, so come prepared. Neither set is one you want to end up missing, because you’ll regret it for the rest of your life. ONE & FIVE, 20:30.