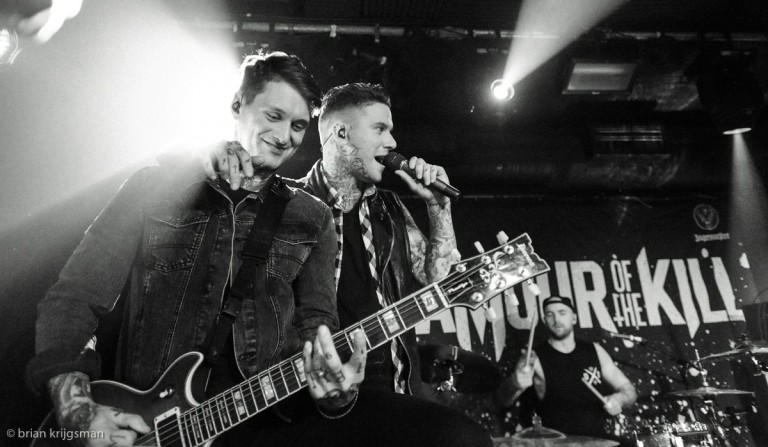 THE BIG COMEBACK INTERVIEW: Glamour of the Kill on Taking Control, Moving Forward and Stepping Up

Two years can be quite some time out of the limelight when you’re a musician. For Yorkshire’s Glamour of the Kill, two years was just enough time to figure out exactly what the hell was going on and subsequently make their grand return. Davey Richmond and co. marked their full return earlier this year with news of comeback shows and the promise of a new studio album, and we got hold of Davey for an exclusive comeback interview.

Hey Davey. How are you doing?
Good, thank you!

So, tell me: Glamour of the Kill are back! How does it feel to back?
Very, very good. We’ve been talking about it for a while! I got married last August, and I spoke to Mike and asked him if me missed it. He said yes and we decided to get back into it. We’re super pumped!

And how does it feel knowing that you’ve got some exciting stuff under wraps?
We have lots of exciting things to announce that we can’t wait to share with everyone. This music is a major step up from anything we’ve ever done before, and I think people will be shocked by how much has changed compared to our last record. It’s just balls out metal, but with our signature, catchy-as-fuck choruses! It’s very exciting knowing that we are writing something which is leaps and bounds ahead of anything we’ve ever written before, and we can’t wait for people to hear it!

You’ve been gone for the best part of three years. What have you all been up to in that time as individuals?
We were all just doing other things. Mike’s got his own touring company, so he rents vans to bands and stuff. Chris works for Levi Jeans, and Ben – our drummer – lives in Belgium now. We’re all married and I’m actually the general manager of a Mahiki Tiki Bar in Manchester. There’s one in London, too. So we’re basically all settled down!

Why go back to the music?
Because we miss the buzz of going back to the stage with our best mates. Me, Chris and Mike all went to school together and the band was together for the best part of ten years. It took over a big part out our lives, so we had a chat and decided to get back together and release new music.

How about the fan reaction, how’s that been?
It’s been unbelievable. Our show at the Underworld in London is nearly sold out, and it’s only been on sale for a week at this point. Everyone is super excited, and they’ll be even more buzzed when they hear the new music we have in store.

When the band came to an end in 2015, was it always the intention to go back to it years down the line? And at what point did you all decide that now was the time?
Yes! Well, at the time…no? It was never really a break-up, more of a hiatus. Towards the end it was a bit of a joint thing, but at the back of our heads we all knew that we were gonna come back it. We took time off to focus on our personal lives because we were touring solidly for ten years. We wanted to settle down, get married and later regain our passion for music after being let down by the industry. Our priorities are straight, heads clear and the time off is exactly what we needed.

There’s been a lot of change in the industry since you first called it a day. What do you think will be one of the biggest challenges you have to face as you get back out there? And is it why you wanted to be independent?
We’ve had some experiences we we don’t want to go through again regarding labels and management. You need to take a pinch of salt with everything that people say, as sometimes you get promised gold and walk away with bronze. It’s a definitely a love/hate industry, and there’s a lot of snakes in the grass. By doing it ourselves we’ll have total control and see things like sales figures right away. We’ll do it better, probably!

Tell us about the new album, how’s it all going?
It’s still Glamour of the Kill, but it’s faster, more metal, heavier. I’d say we’ve gone back to our roots, and we’re now singing about battles and wars instead of alcohol and sex. When we first started, and in particular on The Summoning, we sang more about the stories which we’d thought up. One of the new songs we’ve got is lyrically about gods of war and stuff like that, so it’s essentially a more metal version of us. It’s also far more conceptual. Mike has been writing some super heavy stuff akin to As I Lay Dying and bands like that. I’ve been listening to a lot of Parkway Drive, too. Ire in particular, it’s amazing and so are that band.

How’s the rest of 2018 going to look for Glamour of the Kill? Outline it for me.
Finishing the album! We’ve already got about 10 or 11 songs written, and we’re going to write as many as we can and then pick the best ones. After that we’ll get everything together, and once they’re done we could potentially ship it to labels or managements. Who knows? Right now it’s nice to have everything under our own control. In November we’ve got a comeback show at the Underworld in Camden, which is nearly sold out. We’ve got dates around that which we’ll all be announcing on Saturday’s. We’re coming to Europe too! We’re playing at De Flux in Zaandam, a suburb of Amsterdam, on 5 November. There’s also talks of going back to Japan.

And are we back for good this time?
Yes, haha! Of course, of course.

Glamour of the Kill will perform at De Flux in Zaandam on 5 November. Get your tickets here.