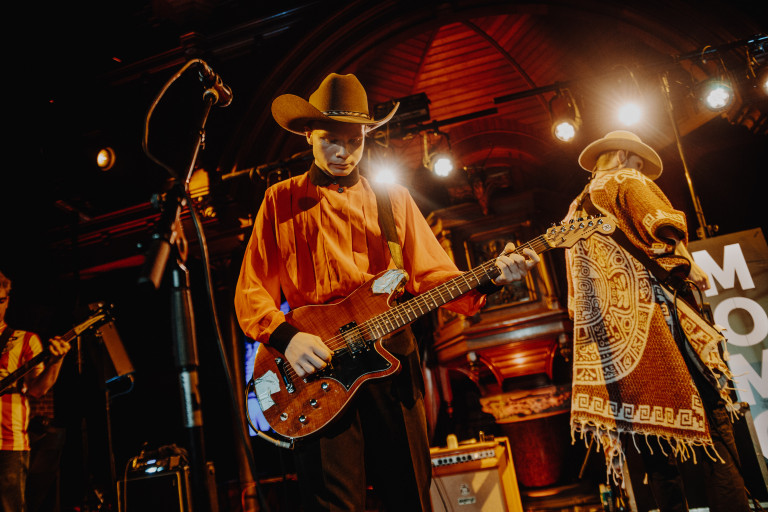 Black Midi And The Schlagenheim Vessel

What do you think of when you hear about the BRIT School? Ed Sheeran, perhaps? How about Adele, or even Amy Winehouse? You see, the BRIT School is often responsible for the success of radio-friendly pop acts with one eye permanently fixed on the A-list. Would black midi come to mind, though? Probably not, even though 2019’s biggest hype band wandered the same corridors as the aforementioned popstars during their time at the BRIT School. The obscure Londoners made a name for themselves through the simplicity of word of mouth during the latter half of 2017, winning the praise of critics and contemporaries alike. Now, with the veil of mystery surrounding Geordie Greer and co. lifted, the band are ready to unleash their mission statement: debut album Schlagenheim. Jack Parker catches up with drummer Morgan Simpson and bassist Cameron Picton over coffee on a chilly Amsterdam morning.

Hi guys. I want to go back to the start of black midi. You spent a lot of time shrouded in anonymity of sorts, and there wasn’t much information about you available to the public for quite some time. Why did you choose to spend so long essentially ‘faceless’?
Morgan: I guess that – in the simplest way possible – we didn’t really have an awful lot to put out or discuss. That’s why we weren’t that active on social media. I mean, we were posting stuff, but only when we needed to promote the gigs. Then we started toying with the idea of actually recording music, but we wanted to wait until we were definitely ready. We haven’t been a band for that long, and so when we started playing at The Windmill in Brixton we fully became comfortable with the music. We understood it more, and we knew what we wanted to achieve. Before that we just wanted to gig as much possible.

Cameron: I’m not sure we were given as much time as other bands to develop, which is purely because of how fast the word of mouth spread about us. It spread quickly, even though we were quite happy to just take things at our own pace. We had no music which we’d actually even recorded until March 2018, and by then we’d only been a band for eight months. People were asking us why we had no music, and called it weird if we said there was none. The way it happened felt more natural for us, though. I think there was never much intention to be purposefully mysterious, we just used social media in a more functional way in order to amplify or emphasise coming to live shows. There wasn’t much we could do other than encourage people to come to the live shows.

Did you ever anticipate it to reach the level you’re at once that word of mouth started spreading?
Morgan: Not one bit, no, haha! The fact that Cameron only learnt the songs on the day of the first gig kind of tells a story in itself. We weren’t really expecting anything, it was just a bit of fun.

I recall hearing about you through Shame back in November 2017. How does it feel to be a massive hype at such a young age? Does it get to you?
Cameron: It’s more important to not let it get to you.

Morgan: The attention is cool, don’t get me wrong, but we’re just focussed on making music.

Cameron: I can’t think of anything in particular, but there have definitely been a few wild moments so far. A few times where someone has gotten in contact with us and it’s just been unreal. Playing with Damo Suziki (Can), for example. We still just take it at our own pace and do things how we would have done them anyway, but connections like Damo definitely open doors for you.

Schlagenheim is the debut album, and it’s a word which quite literally has no definition. What does it mean to you?
Cameron: The most important thing is that it’s absolutely meaningless. It carries the vessel of those songs, which is why we think it’s such a strong title. The only meaning that it could have in the world is being the album title, grouping those songs together.

It means nothing, but it carries a lot of weight. The music itself, as well as the live show, is built heavily on jams and experimentalism. It’s very free flowing, so how did you decide where one track ended and the next began?
Morgan: I guess up until that point we didn’t actually have set songs, and by that I mean more structurally. We knew we wanted to go in and record everything we had, but we didn’t really label it when it came to putting that stuff out. We didn’t want to paint any pictures, but just see what happens. Up until that point there were loose songs.

It was the BRIT School which brought you guys together, and black midi is by far one of the most experimental results of that institution. How did the BRIT School aid you all as individual musicians? How did it shape what black midi has become?
Morgan: Individually, for me, there was definitely a before and after BRIT. I grew up in Hertfordshire, and so throughout my whole childhood there wasn’t really anyone I could connect with on a musical level. Not to say that I was above anyone, but there were certain things I couldn’t talk to my mates about. Going to BRIT was this real “oh shit” moment where I discovered people my age into music the same way I am. Purely that environment bred such a passion to collaborate, and being open to collaboration. I think BRIT School really encourages working with the people around you and having an open mind about anything, not just musically.

Cameron: Pretty much exactly the same. Going to BRIT and playing music almost every day helped me become a better musician, but the most important thing is that openness you learn. Also the sense of adventure within music. It’s exciting to do different things and go out of your comfort zone, just to do things you wouldn’t think of ever doing otherwise. Your peers help push you into doing weirder things, which is that sense of excitement and adventure.

Morgan, you were part of a church band. How did that shape you?
Morgan: It taught me how to play with other people. I was exposed to playing at a young age, whereas other people aren’t exposed to it until they’re like 15 or 16. Church music taught me how to think of things on the spot. The church I went to was the very spontaneous type; there wasn’t a script of sorts that you had to keep up with. You have to be able to make things up, so if you start doing that at a young age it slowly becomes natural to you.

Does religion still have a big impact on your life?
Morgan: Yeah! My parents still go to church. I grew up with it so it’s still a big part of me.

What about your upbringing, Cameron?
Cameron: My granddad was really into jazz, and that trickled down to my uncle and then through to me. My uncle is a session musician, and so is my cousin. My Dad showed me a lot as a kid, and my Mum’s a Spanish teacher. She spent a lot of time in Spain before I was born, so she played a lot of Spanish music to me at home. I was surrounded by a lot of Spanish and Andalusian music, and when I was nine I started getting guitar lessons. My neighbours’ Dad taught me the basics, and once I got older I got more into rock music, and expanded my horizons. The BRIT School then made me really open minded, but before that at secondary school I spent my lunch breaks watching YouTube tutorials and figuring out how to play things which didn’t have tabs online. I would just explore whatever I could find within YouTube’s algorithm.

Together you form the rhythmic part of the band, a band where the onstage experimentation knows no bounds. How do you keep things grounded musically?
Morgan: I don’t think either of us think about it. After playing so much in just under two years you just find a natural connection and understanding amongst your bandmates. You have an inkling as to what the others might do, or might not do!

You come to expect the twists and turns.
Morgan: Yeah, yeah!

Cameron: We’ve all played with each other so many times that we’ve grown to play as more of a unit. Sometimes it almost feels like one organism joining together, and I think that comes from listening to what everyone else is doing. Over time and in jams, everything slowly comes together and slots into its rightful place. Schlagenheim comes out tomorrow (21 June) via Rough Trade.