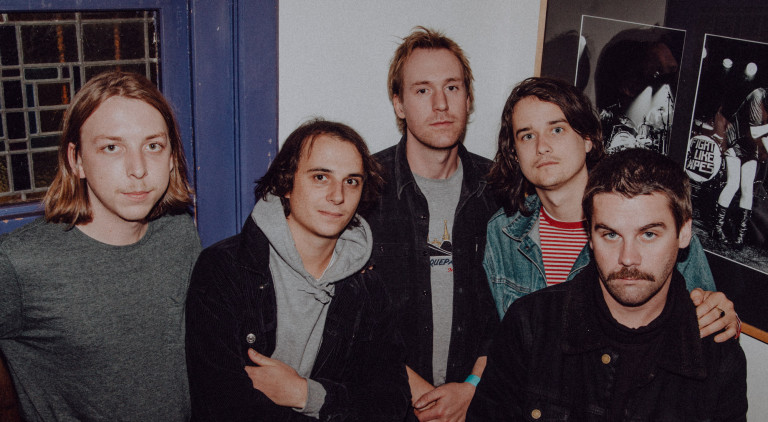 Bittersweet Demons, Reflection and Catharsis with The Murlocs

In two weeks The Murlocs will release new album Bittersweet Demons, which comes in a year that the Australian five-piece mark a decade since forming. On it, they’ve managed to create a timeless-sounding collection of songs which mark the end of one chapter and the start of another. Jack Parker spoke to frontman Ambrose Kenny-Smith about the new album, the personal stories which form its core and reflecting on what’s been nothing short of a whirlwind decade.

Hey Ambrose. It’s been 10 years since The Murlocs formed. How are you planning on celebrating this milestone?
Honestly we’re just pumped to get this record out. It’s been done since last March; we sat on it for a while so seeing it circulate is such a relief. 10 years, yeah…I guess Bittersweet Demons feels the most different to anything we’ve done before. It sure sounds like a band who have been together for ten years, haha. It’s a more grown up album compared to our previous stuff.

So you’ve been sitting on this album since before the pandemic. Why so long?
We were getting it mixed just as the pandemic started, and we did some little video clips in Melbourne in the meantime but as we were being locked down for so long we just kept making other stuff. We were also waiting to be able to do shows again and bring it justice, but the few shows that we did were a bit hit and miss.

Australia obviously made good progress in terms of live music but I guess it must have still been difficult not to be able to road test the songs in advance, right?
Yeah. We did a preview show in Melbourne before we went back into lockdown which we also recorded, and the stream of that comes out on release day. At the time we were like, “bugger, I wish we did another recording” because the second night felt so much more comfortable. It’s a privilege to even be able to play right now, though.

Of course, Melbourne’s back in lockdown again.
Yeah. We’re supposed to be in Sydney this Saturday but I don’t know if we can go. We have to be isolated in our hotel, and it’s all such a debacle. One second we can do it, then overnight it changes and we can’t.

With all this spare time the last year I assume you’ve been able to work on more new Murlocs music?
We worked on new stuff too, yeah, and we’ve been trying to get stuff together as much as possible which is nice.

The stories behind the songs often focus on one thing we’ve missed a lot the last year: people. What drove this songwriting angle?
While writing the record a close friend of mine passed away, and some other stuff happened as well. I wrote a lot of this album on the piano which was a different route for us, and I also listened to a lot of Elton John and John Lennon. I wanted to make everything straight to the point and that’s why I took such a personal approach. A lot of things came pretty close to home throughout the recording process, and a lot of my writing in general is about my friends and my experiences. I felt like I fully wanted to go for it, so that I can now write more conceptually and not just about my diary entries. I felt like I had to push in that direction.

Like a kind of catharsis? You had to get it all off your chest before you could carry on.
Yeah, it’s a closure thing I guess. I wanted to create as much of a connection as I could to the songs before moving on to a different stage of my songwriting.

So what informed your choices when you decided who became the subject matter of a certain song? Francesca, for example, stars your mother in the music video.
My mom has always been a good supporter of mine; she was a single mother too. I wanted to go as far as I could in that direction and write a song about her. It’s an uplifting track and it needed uplifting lyrics. It’s one of my favourite songs, and I’ve always loved the name Francesca. It’s my mom’s middle name.

And how about the visual side to the album? What informed that? To repeat an example, the Francesca video.
That was one of the most 80s things we’d done so it needed a clip with that kind of vibe. I wanted to get a jet ski license and I realised that I hated jet skis so we scrapped that and got a car instead. I’d been watching a lot of Randy Newman stuff, and it kind of went on from there.

Oh man, jet skis are terrifying. Just the thought of it…
It was terrible.

There’s a more retro feel to this album whereas Manic Candid Episode was slicker in terms of production. Was this something you wanted to achieve from the outset?
It was. I was listening to a lot of Harry Nilsson, as well as other kinds of music with that big Phil Spector sound. Heaps of that, and also some John Lennon while I was writing. I’ve always doubled my vocals and I really wanted to push that as much as I could and get a lot grittier. We did it at Button Pusher Studios in Preston and Tim (Dunn, producer) has lots of awesome vintage gear. The mixer really nailed what I was going for, with songs like Francesca and Bittersweet Demons in particular coming closest to that world.

The songs also have quite a timeless feel. Speaking of timeless – what’s one song you wish you had written?
Probably something by Harry Nilsson. His cover of Many Rivers to Cross on Pussy Cat is awesome. If you can write any song that can be covered in a cool way then you’re killing it.

Over the years you’ve subjected yourself to some crazy schedules, and even during the pandemic you’ve worked on a number of albums. What do you do to find rest among the madness?
I just come home and watch skateboarding videos on YouTube to be honest. I treat it like work as much as I can; I have a few personal outlets but I generally just keep busy. Without touring and writing it’s a lot of hanging out, so the wheels are always in motion.

10 years is a long time. Looking back, is there anything you would’ve changed about the last decade?
I don’t have any regrets, no. I feel like we got a lot done, and now having almost two years off with just a few things here and there has had its moments, but ultimately it becomes such a huge part of your life that you have to be going constantly.

And if you’d have been able to go back in time, is there anything you’d say to a young Ambrose about to embark on all these adventures?
Just keep going. It’s funny, because someone asked me the other day what I did in high school and I said I was just skating and playing in bands. I never expected anything to come of it, and I never stopped. Bittersweet Demons is due 25 June.