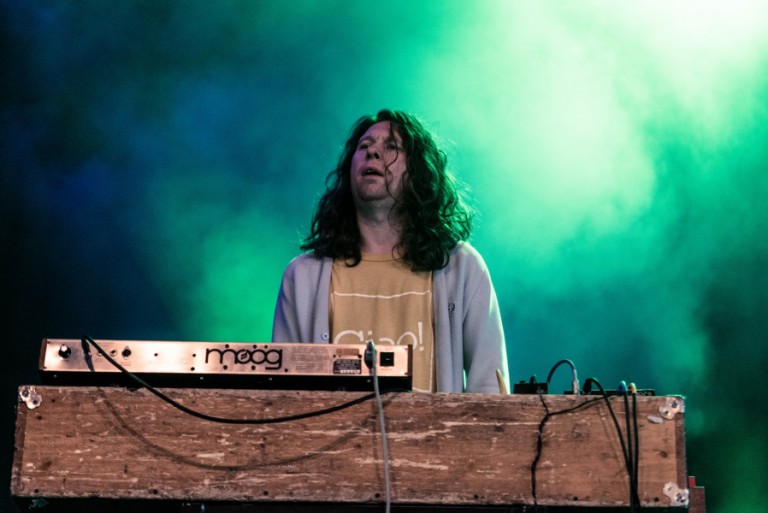 Black Mountain are one of today’s most elusive and interesting bands. The Canadian outfit have just put out brand new studio album IV, which is their first release since 2010’s Wilderness Heart. We called up keyboardist Jeremy Schmidt to talk about the new record, as well as to see what they got up to in the last six years.

Hey Jeremy, how are you?
Good, thanks!

So your new album IV is out now. Why has it taken six years for you to follow-up Wilderness Heart?
Well, we basically took a break from things. We mainly took a break from touring and recording, because we wanted time off after doing it for a good seven or eight years. The wait wasn’t that long deliberately, but we just ended up working on other projects. Eventually, there came a time where it was ideal for all of us to work together again. We were also looking for a new bassist (Colin Cowan).

Is there anything which you learnt in the last six years which changed the way you approached making music?
I suppose, but I can’t think of anything specifically. I guess our working method is always morphing a little bit, but parts of it are also habitual. I wouldn’t really be able to put my finger on that, though. So how did IV come to be what it is today?
We did a lot of jamming in the rehearsal space which we use. We would start playing and pick out things which we’d accidentally land on, and which we thought we could turn into something good. Steve (McBean, vocals) had some songs written, and Amber (Webber, vocals) had some written too. We had some riffs, drum motifs and chord progressions which we liked and eventually just worked on. It was essentially just a case of throwing everything against the wall and seeing what sticks. At the end of it all, an album starts to take shape and we subsequently hammer it out into shape.

I just want to take a look at two songs in particular – Mothers of the Sun and Defector. How did these two songs each come about?
Mothers of the Sun is a really old song. It’s one that we had kicking around for a long time which we liked a lot. The heavy riff is great, and it was initially a jam song which we’d play live during the encore. Friends would join us onstage to play along. It became a song, but we never really liked ho it came about. I really liked it, and I refused to let it fall by the way-side. I drafted out a new arrangement for the track by adding 8th notes and moving the riff later into the song. I played it live at a show so that my bandmates would hear it, because I really wanted to make something of the track. It was like a franchise reboot.

Defector is also an older song, but it’s not nearly as old as Mothers of the Sun. We kinda just kept changing around the arrangements and ended up really liking this sort of slightly chilly, late 70s Pink Floyd disco vibe. We gave into the allure of that sound, and it worked. Right. And how does IV, in your opinion, stand out in comparison to your previous records?
To me it sounds a lot like a logical extension of what Black Mountain has always been about. It moves comfortably and sprawls in all different directions. There’s a lot of lateral movement on it which I like, as it gives the records a dimension that’s interesting and valued. It moves in different direction and takes its time. We didn’t shy away from letting it go that way, because it also has some themes which are short. We’re always trying to make various sounding records, to be honest.

In 2012 you released a soundtrack for Year Zero. How did this collaboration come about, and what influence did it have on IV?
We were just asked by the filmmakers, to be honest. They wanted to use older songs and create new songs that would become part of the score. I don’t remember how it all came about, though. I’m sure it influenced IV in some way, but I don’t know how to quantify it. We’ve always gravitated towards a more cinematic vibe; a large, narrative arc. So where do you see yourselves in another six years’ time?
We’re hoping to make another record sooner than that, this time round. Who knows! It takes as long as it takes for us to make something that we’re happy with. We do have material from IV that we’re gonna come back to and work on, though.

Maybe a one-off EP or single?
Possibly! But we may also just hold on to that for another record. We have a couple of songs from those previous sessions which we might release as a single or a B-side.

Nice. Thanks for your time and good luck!
Thank you!

IV is out now. Stream it below.

Both images courtesy of Rudy Sablerolle.