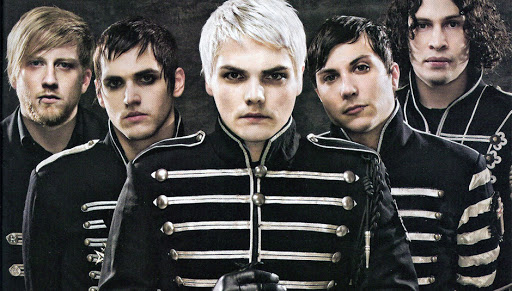 The Black Parade: The Death of a Friend

It’s a controversial comparison, but generally one could argue that My Chemical Romance’s album The Black Parade is the Sgt. Pepper of the emo-generation. With a similar marching band aesthetic and both being ambitious concept albums, the comparisons are largely superficial. However, both records contain a tragic story of kind and caring managers.

The story of Brian Epstein is largely known. As a former record store owner with a remarkable gift for talent-spotting, Epstein managed The Beatles to the height of their career. He incorporated legendary producer George Martin, he was a clever businessman and was generally known as a caring, yet professional person. Epstein’s death by overdose in 1967 was officially ruled as accidental, although sceptics remain persistent that it could have been a suicide, Epstein being a gay man in an era in which homosexuality in the UK was still illegal. Sgt. Pepper’s Lonely Hearts Club Band was released roughly a month before his death.

My Chemical Romance have, on the other hand, had a rough history when it comes to managers. Craig Aaronson, the A&R executive responsible for the band during the release of the Black Parade, passed as a result of cancer in 2014. Aaronson worked with a whole lot of bands in the alternative scene, from Jimmy Eat World to Against Me! He was like Epstein in many ways: a talented ear and modest person. Being omnipresent in the scene, there were an abundance acts who expressed their grief after Aaronson’s passing, describing him as a friend and a fiery visionary who always put music above anything else.

Tom Bryant, author of the My Chemical Romance biography, describes how Aaronson signed the band to Warner sub-label Reprise Records. “He flew to New York and saw My Chemical Romance play in a shitty dive bar. ‘They gave me the chills. It was an easy decision from then on: I thought, no matter what it takes, I’ve got to sign this band’. He spent a year doggedly on their case. The band were wary of signing to a major label, suspicious of money-men A&Rs. It says something about Craig, that My Chemical Romance never thought of him like that. It’s why they signed with him and not one of the guys who took them to fancy restaurants and promised them the world.” Aaronson described himself as a “Persistent Fucker,” fighting for his bands whenever he could. “My job,” he said once, “is to keep everyone at the label’s dick up about my bands.”

The critically acclaimed Black Parade, released in September of 2006, turned My Chemical Romance into the figureheads of the emo and scene culture. It’s no coincidence that their magnum opus bears strong similarities to Sgt. Pepper. The band were actively inspired by the record, giving The Beatles’ classic a more Tim Burton-style aesthetic. Green Day preceded My Chenical Romance with a similar bombastic rock-opera (American Idiot) by two years, and both albums had the same producer (Rob Cavallo). However, The Black Parade wasn’t just musically fantastic, it was the whole image that lifted the band to unforeseen heights. Craig Aaronson was there to watch it all happen, managing the band throughout almost their entire career.

After a success dubbed “ostentatious concept-album-cum-rock-opera about death” by NME, the pressure for a follow-up record was huge. And if The Black Parade is My Chemical Romance’s Sgt. Pepper, then its successor Danger Days: The True Lives of the Fabulous Killjoys is their Magical Mystery Tour. More colourful, more experimental, but loved by only a select few. However, unlike the few months it took the Beatles to release a new record, My Chemical Romance needed to take their time to figure out how to raise the bar they set themselves even higher. Eventually, they concluded that they couldn’t do it, which actually was quite a relief. If the band weren’t able to meet the standards, they might as well take a left turn had have a little fun with it. As much as Danger Days felt as a musical weight off the band’s shoulders, financially it wasn’t anywhere near the ballpark figures of The Black Parade’s success.

It’s not clear how Warner reacted to the financial disappointment Danger Days was to them. Yet, for one reason or another, Craig Aaronson was dropped from the credits on future releases. He moved on to found his own record label, Hundred Handed. Bryant mentions that, while working on the My Chemical Romance biography, Aaronson not once mentioned that he was terminally ill, always being preoccupied with his dedication to music. He passed a year after his label launched.

Lauren Valencia was around to see the final breath of My Chemical Romance, managing the New Jersey outfit for just a year, until their hiatus in 2013. Valencia passed away due to the consequences of cancer in the summer of 2019, just like her predecessor five years prior. Like Epstein and Aaronson, she was praised for being a loving person. After her passing former My Chemical Romance singer Gerard Way wrote a loving message. It read:

“Dear Lauren, You were a light that kept me going when times were really hard. You were there for every show, every shuttle ride, every early morning flight and lobby call, every walk around a city, and every moment that I struggled with being on a long and sometimes hard to process journey. But more than what you did for others, you were incredible and vibrant and funny and wonderful. You were my friend, but you will always be my sister. The World is Dimmer today, but I will always have your light to get me through. Your family is our family and I miss you terribly. I will think of you every day, and every time I get on a stage you will be with me. I love you forever.”

This message does not only imply how good of a person Valencia was, but also, like Epstein and Aaronson, a hard worker. Something My Chemical Romance guitarist Frank Iero confirms: “Lauren Valencia was one of the kindest most hardworking people I have ever had the honour of working with. She is probably (definitely) the only reason anything got done in the last years of mychem [sic], and she absolutely kept us sane for way longer than we could have on our own.”

After graduating from the LA based Loyola Marymount University with a BsC in Business, Management, Marketing and Related Support Services, she got hired by Roc Nation in 2012. Here she took on the task of managing My Chemical Romance. The long posts after her passing about how hard a worker and good friend she was seem like a severe exaggeration and romanisation of her as a person, considering she only managed the band for a year. Either that, or she truly was as great a manager as Way and Iero imply. However it may be, the impact Valencia made is extraordinary.

Epstein, Aaronson and Valencia were all highly creative and talented people, although the most important thing is that they were kind-hearted. These people actively counter the image of managers being “money-grabbing dirtbags“. These people were in it because of their love of music, and they were all taken from the world too soon. As My Chemical Romance gear up for a reunion tour, they’ll have a new manager, and hopefully one that is just as caring and dedicated as these people were. Hannah van Rhee.