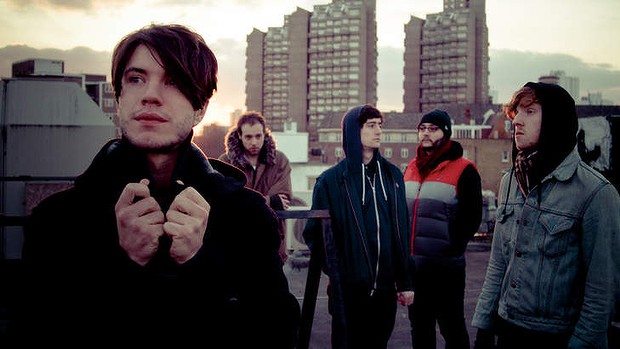 Today, London-quintet Breton is releasing a deluxe edition of their recent second album War Room Stories. Earlier this year, we hailed this album as a 9/10 cinematic masterpiece, with the accompanying re-release proving just as captivating. Two new songs and nine bonus tracks feature, with the band also currently touring Europe one more time to accompany this release. The tour kicked off on Saturday (8 November) in the Dutch city of Utrecht, before stopping off at the Effenaar in Eindhoven last night, together with sextet Sue the Night. Read on for a full review.

Performing to a disappointingly sparse crowd of around 40 people, upcoming indie folk sextet Sue the Night warmed the crowd up for Breton. Consisting of frontwoman Suus de Groot and her band, they played 7 songs over the course of a 30-minute set which included recent single Top of Mind. Bouncy drums and a catchy piano melody, Top of Mind was the set highlight in a show which also featured the intriguing Look Forward. This saw de Groot attempt to engage with the crowd as she asked them so sing parts of the song back to her. This didn’t go down very well, mainly due to the lack of actual crowd. The Kleine Zaal in the Effenaar, where tonight’s show takes place, holds 400 people. Sue the Night are one of many upcoming Dutch acts who are incorporating elements of indie rock, folk and pop into their music. Don’t be surprised if you hear more from them, because they certainly have the potential.

By the time Breton took the stage, around 90 people were in attendance. It’s a disappointing number considering how popular the Roman Rappak-fronted have become throughout the last year. Having said that, they are playing 2 other shows in Holland on this tour which means the crowds are nicely spreading out over 3 shows. Tonight’s somewhat intimate show kicked off with the brooding 302 Watchtowers, off of their recent album. It starts off quite laidback with a breakbeat drum pattern and twinkly synths, before picking up later on and progressing nicely. Fellow album track Brothers followed, another slow burning track which leans towards the more anthemic side of Breton’s music. As with the opening track, it saw Rappak calmly walk across stage whilst pointing his fingers in various directions. Towards the end of the song, it got more upbeat and turned into a Bastille-esque banger which got some audience members starting to dance. It took a few songs for the crowd to warm up, with breakthrough track Edward the Confessor being a perfect catalyst. Its industrial beats and wobbly synth and basslines, accompanied by its gritty black and white video (controlled onstage by Ryan McClarnon, responsible for visuals within Breton), perfectly set the scene as Rappak and his fellow band members intensely wailed their way through a fantastic chorus. This was followed by two very old Breton songs which the band rehearsed especially for this tour, Counter Balance and How Can They Tell. The former is very laid back and percussion-centric, before a buzzing bassline enters halfway amongst a cacophony of other noises. The latter, however, is more danceable and encompasses powerful basslines and an anthemic chorus. The song ends in quite an emotional, hands-in-the-air state as Rappak’s scratchy guitars enter the frame briefly. From this point onwards, the show started to pick up the pace, with the bank raid horns and squeaky club synths of Legs & Arms sparking crowd members to dance more intensely. It was here that a rather intoxicated young man decided to switch the attention to himself as he emphatically danced like a lunatic in front of the stage (it didn’t go unnoticed, with Rappak dedicating a later track to him). Comeback single Got Well Soon saw Breton embrace the funkier sides of electro with a grooving synth line and super danceable outro. It certainly got bassist (and resident dance expert) Daniel McIllvenny dancing, something which he’s never afraid to do.

Search Party kept the upbeat pace going through a mixture of tribal drums and a rave-y synth outro, as Rappak inquisitively asked, “does this describe anybody you know?” alongside sweet plucked strings and keys. Recent single Envy went on to feature more Ibiza-esque melodies and a perfectly danceable refrain of, “because you’re a tourist, there’s nothing wrong with that”, whereas Governing Correctly slowed down the pace and increased the funk-o-meter. “The worst example that you ever gave, was pressed into my palms and then engraved” enthused Rappak over a funky bassline and catchy synth line, which saw our drunk friend do his own version of the chicken dance in front of 90-odd bemused fans and crew. It got even better towards the end, as he got himself onstage before friends and other crowd members caught him for a piss poor stagedive (which, for the sake of accuracy, will be referred to as a stage-fall in this case). Governing Correctly was subsequently followed by brand new single Titan, one of two songs taken from the new re-release. It follows an extremely upbeat and anthemic path, with a catchy piano melody and chanted chorus which saw McIllvenny and beat-maker Ian Patterson energetically dance across stage. It may be slightly predictable, yet Rappak’s powerful claim of “what’s the rush? I know you’re never going back to Earth” is enough to get you raving across the floor. Fan favourite Jostle proceeded to move away from the club-like raves of Envy and Titan, rather opting for bongo-led funk which saw McClarnon enthusiastically whack a cowbell as he jumped across the stage. As the song dies down, a repeated refrain of “marked out in hi-vis to stay blended in” eventually makes way for the one moment which is always going to be the best part of Breton’s show. Its sheer rawness and intensity is enough to make you shiver. Another old song followed, in the shape of the funky 2010 EP track 15x. This one saw beautiful visuals projected onto the screen backing the band, something which Breton has always done so very well.  The jittering synths and anthemic beats of National Grid then preceded main set closer Fifteen Minutes, with both songs also featuring mesmerising and clever visuals. The former track’s visuals mainly project lyrics onto the screen, which helped when Rappak tried to encourage crowd interaction. “I believe, I believe, I believe everybody has a right to surrender” he emotionally shouted down the microphone, before the song completely broke down and made way for Fifteen Minutes. It starts off all euphoric, before working its way towards a full-on rave smasher which saw the whole band intensely shout “return, return, return, return, return, return”. The band followed this by briefly leaving the stage, swiftly returning 2 minutes later for a one-song encore of staple set closer December. On record, December is a mid-tempo electro rocker which becomes a 7-minute rave classic when in a live setting. Once the main song ends, the band slowly speed it up until it becomes a full-on breakbeat x10 banger. It certainly meant that the show didn’t end on a whimper, as the band left to jubilant cheers from the small crowd.

Although faced with such an unfortunately low turnout, Breton still showed the audience that they’re able to pull it off regardless of the circumstances. This tour sees them round off the War Room Stories as they prepare to record their third album. By the time that album surfaces, Breton will hopefully be selling out these kinds of venues (and bigger ones) throughout Europe. Who knows, maybe they will be headlining arena’s in years to come. It’s definitely a possibility if everything goes to plan, which it hopefully will.