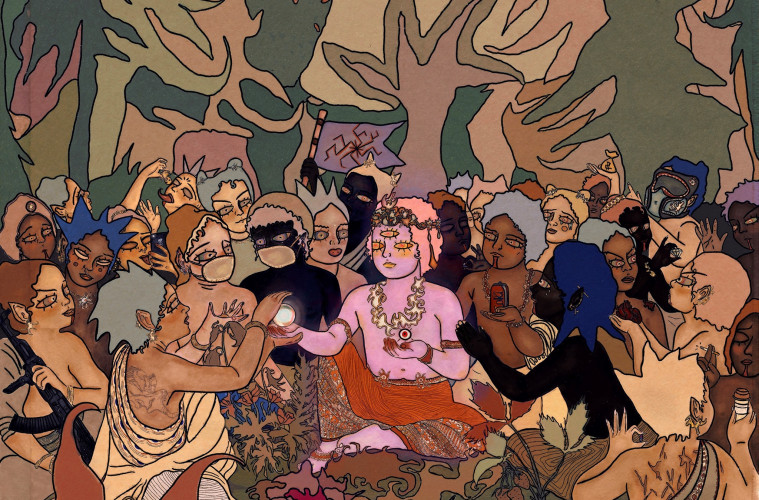 Bring Me the Horizon Go Back to the Future on Post Human: Survival Horror

In recent years, Bring Me the Horizon have become the band metal ‘elitists’ have loved to hate. A gradual and impressive sonic shift from ear shattering death and metalcore into poppier, synth-centric territories has alienated as many old school fans as it’s gained new ones, with each record since 2013’s groundbreaking Sempiternal straying further away from the band’s roots. 2015’s That’s the Spirit was a watered down version of its predecessor, with 2019’s impressive amo nestling itself in a new dimension somewhere in between the two albums which came before it. Oli Sykes and co. have never been afraid to expand their sonic palette, often pulling off impressive explorations into new territories (rave anthem Nihilist Blues and haunting beaut Doomed spring to mind). Last year’s pounding Ludens took cues from the heavier side of the spectrum, with recent singles Parasite Eve and Obey (featuring Yungblud) operating on a similar wavelength. All three tracks feature on the quintet’s new EP, Post Human: Survival Horror.

Post Human: Survival Horror is the first of four EPs expected from the band in the next year. Clocking in at just under half an hour (and counting nine tracks), it’s one of the band’s loudest and most abrasive collections in years. It’s the sound of a group who have plenty to be angry about, with no intention of holding back. High octane opener Dear Diary hits you like a battering ram, its caterwauling riffs, buzzsaw synths and high speed rhythms treading in metalcore territory. Oli Sykes is at his angriest in years throughout, leaving no stone unturned in his ferocious vocal pursuit (“God is a shithead and we’re his rejects”). It’s a short but sharp opener, a kick in the teeth for anyone who deserves it and a shock to the system for everybody else. If you loved Sempiternal’s heaviest moments, then Dear Diary is right up your street. Earlier single Parasite Eve slots in nicely, bridging the gap between Dear Diary’s anger and Teardrops‘ nu-metal bounce. “Everything is so fucked!” declares Sykes during the new single’s chorus, his dark, inward-facing musings (“the emptiness is heavier than you think”) flanked by siren-like synths, gritty guitars and pulsating rhythms. You’d be forgiven for comparing it to Hybrid Theory-era Linkin Park, because the similarities are definitely there. Yungblud collaboration OBEY makes more sense within the context of the EP, closing out the first half with glitchy synths and crushing vocals. As Yungblud himself further departs the alt-pop world which birthed him, pairing up with Bring Me the Horizon seems like exactly the right choice to continue his own sonic progression.

While the first four tracks set the bar high in terms of riffs and energy, Post Human’s second half allows Bring Me the Horizon to continue exploring sonic territories which became commonplace on amo. It’s almost a flick of the switch, leaving the familiar light and diving headfirst into unknown land. Itch For the Cure (When Will We Be Free?) serves as an intro to Babymetal collaboration Kingslayer, employing rave-y synths and throbbing beats over the course of two brief minutes. It plants the seed for the band’s most out-there song to date. Kingslayer is a manic blend of rave elements alongside deep grunts, psychotic melodies and sickly sweet vocals from Babymetal in both English and Japanese. The track wouldn’t be out of place on a video game soundtrack (something the band aren’t strangers to), its intensity ramped up to 11 from start to finish. There’s no sitting still on Kingslayer; it’s made to cause havoc. Nova Twins collaboration 1×1 is the weakest track on Post Human, but even then it’s a powerhouse. “Put me out of my misery” is the focal line, and Nova Twins’ inclusion elevates 1×1 to another level. At times it relies on nu-metal elements, with hints of radio rock and rap popping up here and there. It’s the most by-numbers Bring Me the Horizon get on Post Human, which says a lot about the EPs high level of experimentation.

One Day The Only Butterflies Left Will Be In Your Chest As You March Towards Your Death closes out Post Human, with Evanescence’s Amy Lee joining Sykes on vocal duties. Lee and Sykes are at their most vulnerable when they intertwine over subtle strings and synths. “How’s it gonna feel without my arms wrapped around you?” asks Lee with utmost serenity, Sykes’ voice lathered in Bon Iver-esque waves of autotune. “I thought we had a future but we ain’t got a chance in hell” he sings as the track picks up some urgency, coming to an eerie end and subsequently summoning Post Human’s curtain call. It’s a powerful grand finale, equal parts haunting and beautiful in its delivery. Although not necessarily a concept EP, Post Human: Survival Horror does have a number of common themes which connect the songs. The most prevalent is that of a dystopia versus utopia powerplay of which the direct references aren’t concrete enough to be ‘conceptual’ (think artificial intelligence, civil disobedience), but present enough to mean something. What it may be is anyone’s guess, but this quasi-futuristic element is a cornerstone of the entire EP. For a band who don’t like to sit still, Bring Me the Horizon have never sounded more comfortable than they do on Post Human. Just don’t be surprised if, come next year, they’ve already rewritten their own rulebook. Post Human: Survival Horror comes out on Friday (30 October) via Sony/RCA.