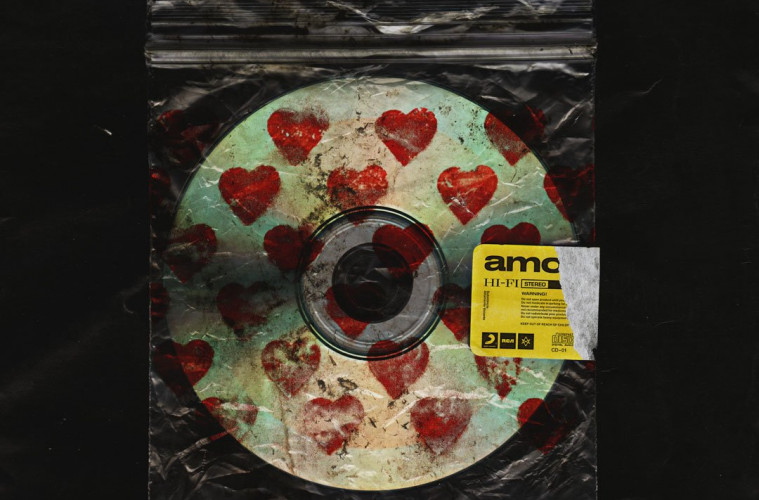 Bring Me the Horizon’s amo: An Honest Rebirth

What does it mean to love? And what does it mean to lose? Loving and losing are two incredibly profound aspects of human emotion, and the ways in which we deal with them differ greatly not just between people, but also within each and every one of us. Our coping mechanisms continuously evolve, such is the dynamic nature of human life. This evolution extends itself far beyond the development of emotions, though, seeping into other, somewhat unrelated aspects of our being: the places we visit, the people we choose to be intimate with, and even the music we create or consume. This third aspect is particularly pertinent to Bring Me the Horizon frontman Oli Sykes, who has experienced both love and loss in the last three years. Following a well-publicised split in 2016, Sykes went through a healing period which eventually served as the foundations for his band’s new album amo, due Friday. amo is the product of Sykes’ inner-reflection and the entire band’s growth as not only humans, but also as musicians. The result is a world away from anything Bring Me the Horizon have ever done before.

Large swathes of amo’s lyrical content are rooted in Sykes’ own cathartic reflection on love and loss, evident from the off on the subdued i apologise if you feel something. A lilting synth line takes the lead here, remaining a constant throughout as flittering clicked percussion underpins proceedings during a gradual instrumental build-up. “Love is all we have” sings a heavily altered voice, setting the scene for an album which is lyrically introverted yet musically way out there. Lead single MANTRA is the only song on amo which sounds remotely similar to anything Bring Me the Horizon have done before, incorporating distorted power riffs, pounding rhythms and a poppier sensibility in Sykes’ vocal delivery. Think 2015’s Happy Song, but then turned up a couple of notches. So far it seems like a relatively normal start, but if there’s anything Bring Me the Horizon want to achieve on amo, then sounding normal isn’t it. Take nihilist blues, a collaboration with the mystical Grimes, for example. It’s hands down one of the best things the band have ever done, and that’s because it sounds like nothing else. Pulsating EDM synths (courtesy of the brilliant Jordan Fish) race over you like an unforgiving tidal wave, eventually crashing like a tsunami during an absolutely monstrous rave section. It’s dark, futuristic and larger than life, three things which you’ll learn to love about amo’s highlights. Grimes’ addition to the track is far from a throwaway collaboration; in fact, it has her name written all over it. At one point she references isolation, neural disorders and feeling like a “lamb to the slaughter“, before a heartbroken Sykes takes over, asking for someone to “raise the roof“. The returning rave section does exactly like this, and it’s sure to make for an absolute fan favourite come tour time.

Although experimentation seems to have been rule number one on amo, there are still a few songs which stick to a simple formula. in the dark is what you’d describe as a by-numbers alternative radio rock song, operating on a subdued wavelength which allows Sykes to focus on cloaking his lyrics in religious metaphor. In fact, there are countless moments across the entire album where Sykes makes reference to God, heaven, hell and the act of committing sin. “Don’t swear to God he never asked you, it’s not his heart you drove a knife through” he sings in almost direct reference to his split, its darker undertones well-suited to the track’s subdued tone. Far from subdued is Dani Filth collaboration wonderful life, a song spearheaded by an absolute fucking sledgehammer of a riff. It’s one of the strongest tracks Bring Me the Horizon have put out to date, centring on clever wordplay, an enormous chorus and the aforementioned monstrous riff. There are plenty of different layers to be picked apart here, too, from siren-like wails and percussive injections to studio noise, handclaps and more synth lines than your brain can digest on the first listen. In short, there’s a lot going on during wonderful life, and it makes for an all the more entertaining listen. ouch is the first of two largely instrumental interludes on amo, leaning slightly towards elements of breakbeat and fusion. The live drums (courtesy of an impressive Matt Nicholls) add an extra hint of power to proceedings, with the only vocals present heavily altered. “And I know I said you could drag me through me through hell, but I didn’t think you’d fuck the devil” is a key lyric here, hinting back at Sykes’ break-up as most of the record does.

It wouldn’t be a Bring Me the Horizon album without the standard radio-ready single, and it’ safe to say that this is medicine. It’s unsurprisingly divided opinion among fans, but then again that doesn’t seem to be very difficult to do. “You need a taste of your own medicine” declares Sykes during the punchy chorus, alluding to his ex in telling her that she should need to experience what he went through someday. From the off, amo has sounded like one massive bout of catharsis for Sykes, with this added emotional angle bringing a lot more to the table than you’d expect. He’s unforgiving, and it shows. The God-referencing sugar honey ice & tea is one of the strongest tracks on amo, possessing a killer riff which holds the track together alongside handclap beats and pounding percussion from drummer Matt Nicholls. There’s a sense of swagger in Sykes’ attitude, and it’s the first moment on amo where he doesn’t sound fragile or angry (even if he still “can’t figure it out”). This switch in mindset pays off, because it makes for an energetic and gritty tornado of sounds. “We don’t know what we want, but we know that we want it” screams Sheffield’s favourite son ahead of a massive solo from Lee Malia, with Sykes throwing an almost uncharacteristically “oh, yeah, yeah, yeah, woo!” in the mix for good measure. A fan favourite, that’s for sure.

On the first half of amo, Bring Me the Horizon have managed to explore EDM, radio rock, breakbeat and even more pop sensibility than before, but what else could they still dip their toes into? Children’s choirs, right? Yep. why you gotta kick me when i’m down? is a slow-burning highlight, making fantastic use of a child’s choir in and amongst defiant, semi-rapped vocals from Sykes. Using a choir of kids to echo his own adult fears was a clever move, both sonically and metaphorically. He’s absolutely on top of his game here, still carrying that prior swagger as he traverses through a world of dark horns, buzzsaw synths and epileptic percussive segments. He seems to be taking a stab at those who wish him ill during dark moments, but he doesn’t care; “you better pray that I don’t get up this time round” he declares. fresh bruises is another interlude of sorts, very similar in approach and style to ouch. It’s less energetic than ouch, yet still heavily centred on altered vocals and their interplay with Nicholls’ percussion and Fish’s production. “Don’t you try to fuck with me” is the key line here, although that’s probably because it’s one of the only ones. Despite its role as somewhat of a filler track, it’s still quite powerful in its own right. mother tongue is the fourth track the band shared with the world, and it’s definitely the weakest on the album. That’s not to take away from the very clear emotionality in Sykes’ lyrics, but it just doesn’t match up to the rest of amo. 2015’s That’s the Spirit album had the gripping Follow You, however mother tongue sounds like a less spectacular little sibling.

The record careers towards a home straight on the brilliant heavy metal, a track which takes a stab at the band’s naysayers together with beatboxer Rahzel. Sykes directly addresses the way fans have reacted to the band’s sonic changes in recent years, taking absolutely no prisoners with his unabashed honesty: “I’m afraid you don’t love me anymore, because a kid on the ‘gram in a blacked out little tank says it ain’t heavy metal”. Does he sound salty? A bit. Does he sound like he’s sick of fans complaining that the music isn’t brutal? Kind of. Does he care, though? No, “but that’s alright”. Musicians are, unsurprisingly(!), also human beings, and so just like dealing with love and loss, the music we make and listen to will also keep changing. And it’ll change for you, too. The final ten seconds of heavy metal are intentionally fierce and brutal, an added element which perfectly suits the snarky vibe of the track. i don’t know what to say closes out the record in rousing fashion, stripping things back on a combination of acoustic guitar and strings. The percussion is minimal, and Sykes is pensive. After a couple of minutes the track hits full-on orchestral mode, strings swirling as the initially minimal instrumental backing hits its peak. There’s another intricate solo thrown into the mix for good measure, allowing amo to reach a bombastic ending which is coated in magnificent orchestral sheen. It’s evident here that 2016’s Royal Albert Hall show definitely rubbed off on the band’s creative process. “As long as I’m still smiling, then I don’t know what to say” states Sykes at one point, leaving on a positive note as he looks forward to a bright future.

As strings play amo out with serenity, there’s only one question left to answer: was it all worth it? In short, yes. Amo is Bring Me the Horizon’s defining record, a statement of intent to all naysayers. The band found themselves at a musical crossroads after That’s the Spirit, and so instead of becoming stagnant they’ve explored sonic boundaries far and wide to make an album which is more varied than anything they’ve done before. They’ve also made an album which allowed Sykes to dissect the very core of what it means to go through love and loss, allowing us into his world for an honest glimpse at struggle. He uses amo as an opportunity to wax lyrical on love, loss, religion, hatred and public perception, and he does it well. There’s something for everyone on amo, whether it be ferocity (MANTRA, wonderful life, sugar honey ice & tea), serenity (why you gotta kick me when i’m down?, i don’t know what to say), experimentalism (nihilist blues, ouch) or just straight-up hits (medicine). You might not like the direction Bring Me the Horizon have gone in for amo, but that won’t matter much to them; much like love and loss, life changes with such dynamism that we either learn to accept it, or we just move on. The choice is yours. amo is out Friday.