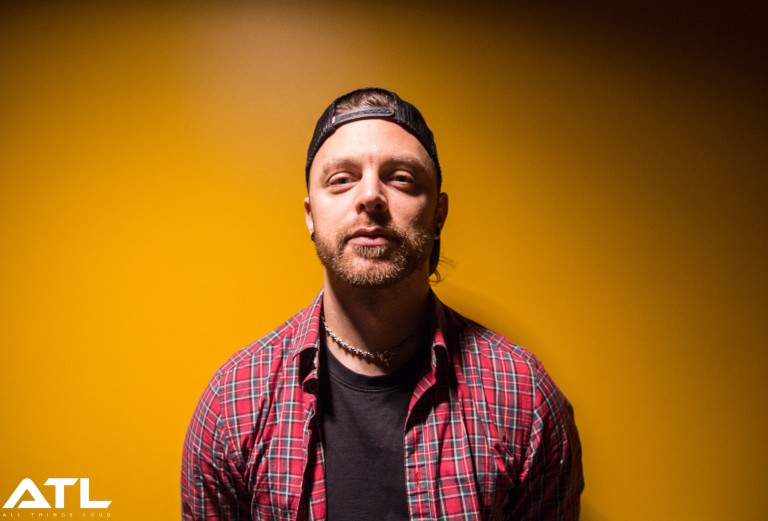 Bullet for My Valentine’s Matt Tuck: “If you’re never cool, then you can never be uncool”

As the metal landscape progresses over time, the fight to remain relevant becomes harder and harder. For some bands it isn’t so easy, with their ongoing attempts to pursue relevance often falling short of the mark. For others, though, relevance is an effortless concept which is repeated upon each new release. Welsh metal outfit Bullet for My Valentine first held a flame up to the metal world in 1998, and they haven’t looked back since. New single Don’t Need You was recently put out to promote their current European tour with Killswitch Engage and Cane Hill, and we sat down with frontman Matt Tuck to discuss the past, present and future of his band ahead of a sold-out show at the 013 in Tilburg.

Hi Matt. First things first – how are you?
I’m good, thank you. Nice and tired, as usual, but it’s been a very good 18 months. We’re just coming to the end of it.

How’s the tour with Killswitch Engage and Cane Hill been so far?
It’s been great, man. Just playing massive shows everywhere in front of crazy fans with loud music. Today’s gonna be a banger as well, I think it’s 3,000 people and sold out. It’s gonna be good!

You just put out a new single, Don’t Need You. What are the underlying ideas behind that song?
We just wanted to write a one-off track as we had a bit of time off, so we used the song as a tool to promote the tour and have something fresh to play which will get people all buzzed up. We went to the studio and put a demo together made up of some riffs we had lying around, and then spent the rest of our two weeks off rewriting it and fine-tuning it. It’s a very aggressive song, a very “middle finger”-y song to a lot of people. It’s just a very pissed off Matt. I get those moments sometimes, where I become a miserable bastard who hates everything in life. Haha. But it’s alright! Those are the songs that people end up fucking loving, the really angry and pissed off ones!

And is this track an indication of any future music and what we could expect from it?
Yeah, I’d like to think so! It’s not in the works, because we’re first gonna take some time off next year. After that we’ll start thinking about it. I mean, that’s where we’re at now; it’s definitely proven to be that our fanbase and beyond has liked these kinds of songs the most. This track has had the biggest amount of opening week views on YouTube of all our tracks ever.

Like, 2 million views I think it was?
Yeah, it was crazy. Which is good, y’know? Having that aggressive side and using more production techniques is good, and it elevates the band to a whole different level. The band is obviously the same, yet still somewhat different.

So did you approach the track differently to previous work?
Not differently per se, it’s just one of those tracks that comes about naturally and we all go, “fuck, that’s just great”. Our producer Colin started to fuck around with some strings, and said he wanted it to be really epic in the chorus and stuff. The intro was already written, so it’s weird to then write a song and have it sound completely different after you’ve been in the studio.

Would you then consider going down an even heavier path, akin to bands like Killswitch Engage?
I don’t know, we just do what we want. We’ve always been riff-based and heavy in my opinion, and I think that Don’t Need You is heavier than anything Killswitch have ever done. It’s a far more brutal song, and it’s something we’ve always done. We’re not afraid to step back from that heaviness either, it just depends on the mood of the band and where we’re at when we’re writing.

It’s been 10 years since The Poison came out, and you’ll be doing some stuff to collaborate it. How do you feel about that record when you look back on it?
It’s good, man! It’s one of those records which was a bit of a landmark record. I don’t know; it was definitely an album that sticks its head out for whatever reason, and people loved it. It basically paved the way for us to do what we do, and it came out at the right time. If we wrote that record today, it wouldn’t be a big deal. It was massive back then, and it’s all about the timing; it hit a nerve with everyone. Love it or hate it, The Poison was a record that the younger generation got into metal with. We have youngsters coming up to us after shows telling us it was The Poison which got them into metal, and that it was the first record they ever bought. It’s great.

Of course you’ve now also moved on to Spinefarm Records. Why the switch to a smaller independent label?
Our deal with Sony ran out, so we did what we needed to do and decided to move on. We signed a deal for five albums, and we released five great albums. After that, Sony came up with a new deal and we just didn’t want to do it. We wanted a label which was more aimed towards what we do, and that had a roster which revolves around hard rock and metal instead of everything. It’s a bit more of a boutique label to be part of, and we still have all the benefits of a major but just with Spinefarm. We’re on royalties which are amazing and way better than what Sony had ever given us, so it’s a win-win situation.

Do you wish you’d done it sooner then?
No, I don’t think so. Everything happens for a reason with our band, so we just take it as it comes. Having the might of a major label behind us during those early days is the best thing we’ve ever done. We got offered Roadrunner back then too, but we turned it down. It was good, though, y’know? We didn’t use them, but we took everything that we could from them. And why wouldn’t you? Exploit their strengths, as they would do to us as well!

So do you think that signing to such a major label as a young band can also be a big risk when you’re just starting out? To get sucked into that commercial landscape, for example.
I think it can be, but we were so confident in who we were and what we were producing that it was worth it. They committed to us for so long that we figured it was definitely worth something. You don’t commit to a metal band for five albums without a good reason, especially if you don’t believe that there’s a future for them. And they were right.

What’s the metal scene like back home in Wales, actually?
I haven’t lived there for the last five years, and I’ve been on tour for last twelve, so I’m a bit out of touch with what’s going on back home. However, when I was growing up it was buzzing. Everyone was in a band, and it was all rock/metal based. It was very vibrant and competitive, but again it was probably one of those things that spurred us on to ‘make it’. There was so much competition, and if we didn’t have that competition then we wouldn’t have been as motivated to be better than the rest.

Strive to be better, basically?
Yeah, and we still have that too. We still feel like that.

What do you think of the current crop of young and upcoming bands? Is there anything standing out? You’ve got Cane Hill out on tour with you now, and they’re a good example of hard work paying off.
Honestly, nothing is really standing out. Cane Hill are currently head and shoulders above the rest at the minute, just because of how different they are to the newer generation of metal bands. They’ve almost taken it back fifteen years to the Korn era, and they’ve got this new style which is like an aggressive brand of nu-metal. It’s not something that anyone else is doing, and it’s good to be different.

And what advice would you have for a band who were in the same position that you were when starting out?
I think the only advice I would give is to do what you want to do and not flip between trends or what’s cool at the time, y’know? If you’re never cool, then you can never be uncool. That’s how we looked at it. We were never the cool band; rather, we were the new and fresh band who were a big hope. We’ve never been the cool band though, never part of a scene or anything. I think a lot of bands get attracted to that, though, because they have to look a certain way and because music is fashionable for a little bit. They get sucked into this thing instead of doing what they want to do.

A lot of people like to categorize different styles of metal, but Bullet for My Valentine tends to transcend these boundaries.
Yeah, we do! We’re metal fans, we’re rock fans, so that’s just what we’ve always done. We’re a hybrid of that, and a lot of bands wouldn’t do that. We’ve written songs which we shouldn’t have, but we did and they turned out to be the biggest singles on the whole record! We get a lot of shit for that, because it “doesn’t belong” even though it does for us. It’s hard to explain. We don’t do stuff because it’s what people want to hear; we do stuff because we love it and because we’re songwriters in a band. We’re not afraid to be brave.

And so next year you’ll be taking a year off, I take it?
I suppose. It’s never fully off, because we still have to write a record. It’s not gonna write itself. We’ll be off the road, though, and just keeping our heads down and cracking on with the album!

Bullet for My Valentine will get to work on a new studio album next year. Stream new single Don’t Need You below.