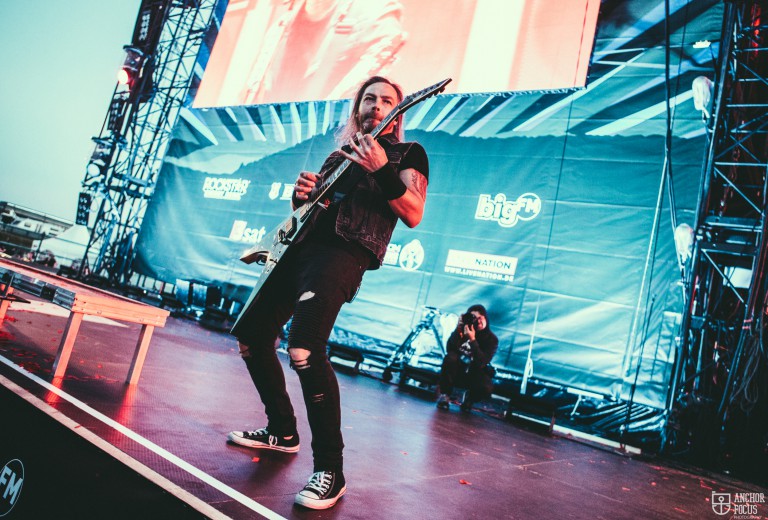 THE BUSIEST WEEK OF 2018: A GUIDE TO SURVIVING THE WEEK FROM HELL

#TheWeekFromHell is back. The upcoming first week of November will see Dutch ground left absolutely pulverised by an array of live shows, all of which seem to have been squashed within the cosy confines of seven mental days. Every step you’ll take this week will find you within the vicinity of a visceral live show, and there doesn’t seem to be much in the way of baying fans who seem prepared to leave not one stone unturned in their pursuit of great live music. It’s going to be an unbearably busy week for everyone here at All Things Loud, and so we figured it was a good time to present everybody with a guide to surviving the aptly dubbed Week From Hell. Not sure what to do yet? Then use this guide to help you plan your movements, and thank us later.

Make sure to start off your week with a hefty dosis of in-your-face garage punk courtesy of British duo Slaves, whose knack for a solid melody and ripping chorus knows absolutely no bounds. Together with new album Acts of Fear And Love in tow, Laure Vincent and Isaac Holman look set to tear the Melkweg OZ a new one in similar fashion to how they did back on Halloween in 2016. Tickets.

The Popronde is Holland’s biggest travelling festival, allowing small and upcoming artists to strut their stuff on stages across the entire country over the course of the entire autumn. Practically every city in the country takes part in the Popronde, with the Rotterdam leg of the travelling festival stopping off across more than 40 venues in the centre on 3 November. Each city curates its own line-up from a wider selection, with highlights on Rotterdam’s billing including AVA NOVA, Karel and Ziggy Splynt. The Popronde is free.

“FEAR LEADS TO PANIC, PANIC LEADS TO PAIN…”. If you find yourself belting out these words on 4 November then there’s only one you can be (and rightfully so): IDLES‘ behemoth show at the Melkweg in Amsterdam, together with fellow hellraisers JOHN. Joe Talbot and co. are currently riding the immense wave of success brought to them by new album Joy As An Act of Resistance, which is undoubtedly one of 2018’s strongest records. Live, IDLES are on a whole other level compared to their contemporaries, and so it shouldn’t come as a surprise that this show is, in fact, sold out.

Talking Heads mastermind and cult hero David Byrne will stop off at the AFAS Live in Amsterdam on 4 November as part of the immensely popular and unbelievably innovative live show in support of new album American Utopia. Byrne himself has described the fully-mobile live show as his most ambitious production since the critically acclaimed Stop Making Sense (1983), and it really is something which needs to be seen to be believed. Agnes Obel will join him on the night, and it is unfortunately sold out. Catch a glimpse of the show below.

Who doesn’t love a good old dose of pop punk? If you’re in desperate need of a fix, then Haarlem’s Patronaat is where you need to be on 4 November. Not only will you get a headline set from State Champs, but you’ll also be treated to shows from special guests Seaway, Stand Atlantic and Woes. With new album Living Proof and a summer stint on the final Vans Warped Tour in tow, Derek DiScanio and co. look set to tear Haarlem a new one. Tickets.

Superorganism are without a shadow of a doubt the hype band of the year. The multi-skilled sound and visual collective – who met online and now live together in London – put out the highly praised and self-titled Superorganism just ahead of the festival season, ensuring that crowds across the globe finally knew enough about them to really engage with the hype which has built up online since breakthrough track Something For Your M.I.N.D. saw light of day. A Superorganism live show is colourful, frenetic and ultimately the most fun you’ll have on a cold November night, and for their show at Utrecht’s TivoliVredenburg there are still tickets.

If upbeat and punchy garage rock-meets-blues is your thing, then you need to get yourself down to Tilburg’s Paradox for an intimate evening with Burger Records hotshot Mattiel. Together with her tight live band (accentuated in particular by drummer Jordan Manley), Mattiel Brown will spend a bunch of days on Dutch soil treating crowds to cuts from her successful and acclaimed self-titled debut. Expect plenty of highlights, among them the grisly Send It On Over, bouncy Bye Bye and memorable Count Your Blessings. There are still tickets.

There’s no getting around the immensely successful career trajectory which the Aussies in 5 Seconds of Summer have spent the best part of half a decade following, and so it shouldn’t come as too much of a surprise that they are an undoubtedly visceral force to be reckoned with on the live stage. New album Youngblood sees them ditch their pop-punk beginnings for a more streamlined, poppy sound, and it’s definitely not done them a disservice. Following an intimate comeback show at the Melkweg OZ in March, the quartet now head to Amsterdam’s AFAS Live for a sold out show.

For fans of funk-infused psychedelic garage rock, you really can’t go wrong with a good dose of Beach Goth outfit The Growlers. New album Casual Acquaintances serves as a nice, lo-fi stopgap between previous album City Club (prod. by Julian Casablancas of Strokes and Voidz fame) and whatever they’ll do in 2019, and as part of an accompanying Beach Goth tour they’ll stop off at Amsterdam’s Paradiso. Almost two years ago to the day, Brooks Nielsen and co. proved to be a huge success when they rocked a packed Paradiso Noord, and now they’re back for a second helping of that Amsterdam goodness. Big Enough-hitmaker Kirin J Callinan joins, and the show is sold out.

If #TheWeekFromHell’s chaos is too much to handle for your body and mind, then use this night as a chance to clear your mind with Jen Cloher‘s serene indie garage. She’ll be bringing her acoustic folk show to Utrecht’s Molen de Ster on 7 November as part of a larger European tour. If you’re already familiar with Cloher’s back catalogue, then this Utrecht show is the perfect opportunity to experience a different side to her. Tickets.

Let’s chuck an arena show into the mix for some contrast. Finnish extreme hard rockers Nightwish will bring their bombastic and cataclysmic live show to Antwerp’s Lotto Arena on 7 November as part of a European tour in support of brand new compilation album Decades. Expect plenty of fire, co2 and confetti as Nightwish prepare to blow you away with their unrivalled live experience. Tickets.

What better way to celebrate that weekend is almost upon us than with a celebration of one of metalcore’s largest and finest bands? Bullet For my Valentine will take over Tilburg’s 013 on 8 November in support of massive new album Gravity, and for the occasion they’ve also taken the liberty of inviting three equally exciting special guests: Of Mice & Men, Nothing More and SHVPES. Expect a night full of ear-shattering riffs, core-shaking rhythms and enough pits to hopefully last you a lifetime. If you’re going to spend money on a good night out next weekend, then make sure you do it at the 013. Tickets.

If Bullet For My Valentine isn’t quite your thing but you still want to rage the fuck out, then make the short trip from Tilburg to Eindhoven’s for this year’s Dutch leg of the annual Never Say Die! Tour. The multi-band one dayer will once again present visitors with a solid glimpse of today’s most exciting names in metalcore, with Northlane and Being As An Ocean sharing bill-topping duties. Casey, Currents, Alazka, Polar and Thousand Below join them, and there are still tickets.

Time and time again, Frank Turner has proven himself to be one of folk punk’s most incendiary stage acts and generally successful recording artists. As part of the European tour in support of solid new album Be More Kind, Turner and his Sleeping Souls will stop off at Amsterdam’s Melkweg Max together with special guests Pup and Xylaroo. Expect nothing less than anthems, anthems and even more anthems. Tickets.

Rounding off #TheWeekFromHell are American hard rockers Black Stone Cherry, who will take on Tilburg’s 013 in support of new album Family Tree. The album, out now via Mascot Records, is one of their most powerful to date and serves as yet another reminder that dad rock isn’t dead. Hard rock favourites Monster Truck join them, and there are still tickets.

Sleep isn’t necessary, but enjoyment is. Have a good week.

All Things Loud will be bringing you coverage of the above live shows. Check back daily on our website and across all social media for footage, interviews and opinions. Listen to songs from all of the above artists in our #TheWeekFromHell playlist, below.