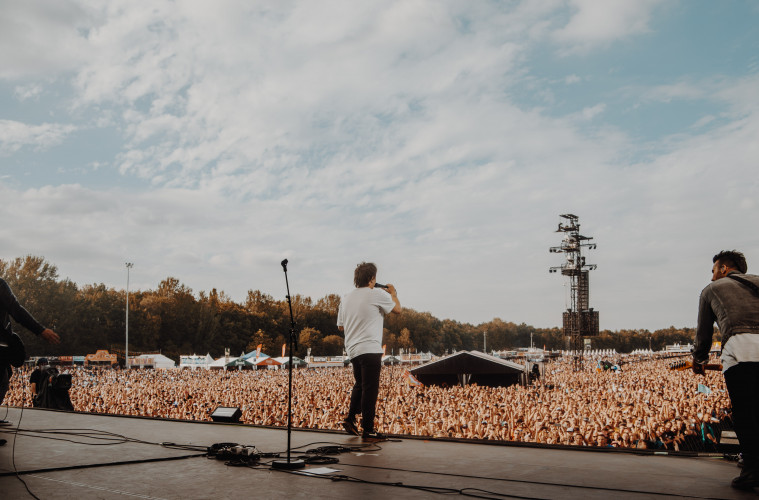 Can You Afford Freedom? Inside Nothing But Thieves’ Darkest Album to Date

Back in March, just as the COVID-19 pandemic unravelled, Nothing But Thieves unveiled the first glimpse of third album Moral Panic by way of punch lead single Is Everybody Going Crazy? With the world taking on uglier twists and turns by the day, industries have been left to rot as the uncertainty ramps up a new notch every day. Moral Panic – which is due next week (23 October) – happens to be an apt soundtrack to a world on fire, one where police brutality is more prevalent than ever, and one where the physical state of our planet is cast into more and more doubt as the minutes, hours and days pass by. It’s an 11-track collection of hard-hitting alt rock which takes strong cues from rap, hip hop and pop. From its jarring jumpstart on Unperson to the soaring Before I Drift Away, and via a slew of bar raising anthems (This Feels Like the End, Impossible, Free If We Want It), Moral Panic is the sound of a band coming to terms with a world in despair, seeking hope while holding up a mirror at our flaws. It’s a forward-thinking example of how rock music can evolve without straying too far from the path. Jack Parker called up frontman Conor Mason to discuss the album, some of its underlying stories and how the best change comes from within.

Hey Conor. Here we are again, a bit more than six months after you dropped the first single from Moral Panic. How have you been?
Yeah man. Pfft, I don’t know. I’ve been in and out of frustration I guess. The best way to say it is that I’ve had good and bad moments.

I guess adapting has been tough, especially as a musician with the sudden lack of touring.
It all makes no sense to me. As a musician you’re always craving time at home, but then touring becomes such a part of your system and it becomes strange to not be moving or travelling at all. On my busier days I found myself being way better, but what I want to be able to do is just live quietly, which can be difficult.

Did you end up going back and changing anything about the record at all? Especially given the situation.
No, not really. The thing that’s quite weird about this record is that it feels way more relevant now than it did back when we wrote it. I’d like to think that at the time the kettle was just getting switched on; everything felt tense and fearful. Now, though, the kettle is bloody screaming and blowing up. That’s why it feels more relevant. We were so happy with how it was, and it fits so much more now. I was listening to Rage Against the Machine today and that album also feels much more relevant now than it did during the Bush era.

I just want to discuss Moral Panic – the title track – and Phobia. They’ve got ominous lyrics (“5-star hotel and I don’t feel well” on Phobia), but then they’re backed by almost club-like rhythms. Is this juxtaposition of beat-driven music and dark lyrics one you’ve wanted to explore more?
Definitely. I was in Australia with Dom (Craik, guitar) on a walk and he straight up just said to me that he thought our melodic songwriting could be better. I didn’t take offence or anything, but it was interesting because Dom’s been working with a lot of hip hop and pop producers lately. I love that stuff too, and it’s actually what I listen to more than rock at the moment. I decided to study it properly and I learnt so much more about flow, cadence and rhythm. Once you immerse yourself in it you can’t not think about those rhymes and those patterns. Moral Panic is heavily influenced by RnB and hip hop, but we also wanted to push rock forward rather than drag a dead horse. In terms of the darker sound, we’ve always been influenced by Queens of the Stone Age. Marilyn Manson definitely inspired Phobia vocally. I wanted to portray the demise of this character, and the music suits it so well. That dark, alt pop thing is so current and enjoyable, and it’s something which we all love listening to as well. That breathy vocal I do is so small and stark, until it gets more Manson and Rage-y.

You mention the breathy vocals there. It definitely has hints of Billie Eilish to it.
100%. She’s so unbelievably creative. I’ve always had shades of that breathy vocal thing going on, and it’s something I did a lot more of early on with our EPs and on tracks like Graveyard Whistling. Weirdly we did a lot of it before it became popular. It’s nice to go back to that, especially through listening to so much hip hop and RnB.

The album seems to focus on contrasts. There Was Sun, for example, is one of the sunniest songs you’ve written to date. Is this your glimmer of hope among the panic?
Definitely. There’s a couple of songs like that on the record, but if you ever heard the demo version of There Was Sun – which we’ll probably release at some point – you’ll hear how crazy different it is. It was really bright, and far too sunny. We ended up trying to thread some darkness throughout it. I love that song and its lyrics, which Joe (Langridge-Brown, guitar) wrote. We went to the studio asking ourselves how we could make it fit into the record, and so we worked a lot with ambience and psychedelic sounds. The lyrics also became a little more psychedelic, and so that’s definitely a moment of hope. We always try to add a moment of hope to each album, but it’s hard to be overly hopeful when you’re naturally quite realistic as people, perhaps even a shade pessimistic. It’s almost hopeful for us, haha. Of course you hope that people will connect with it on their own level, too. 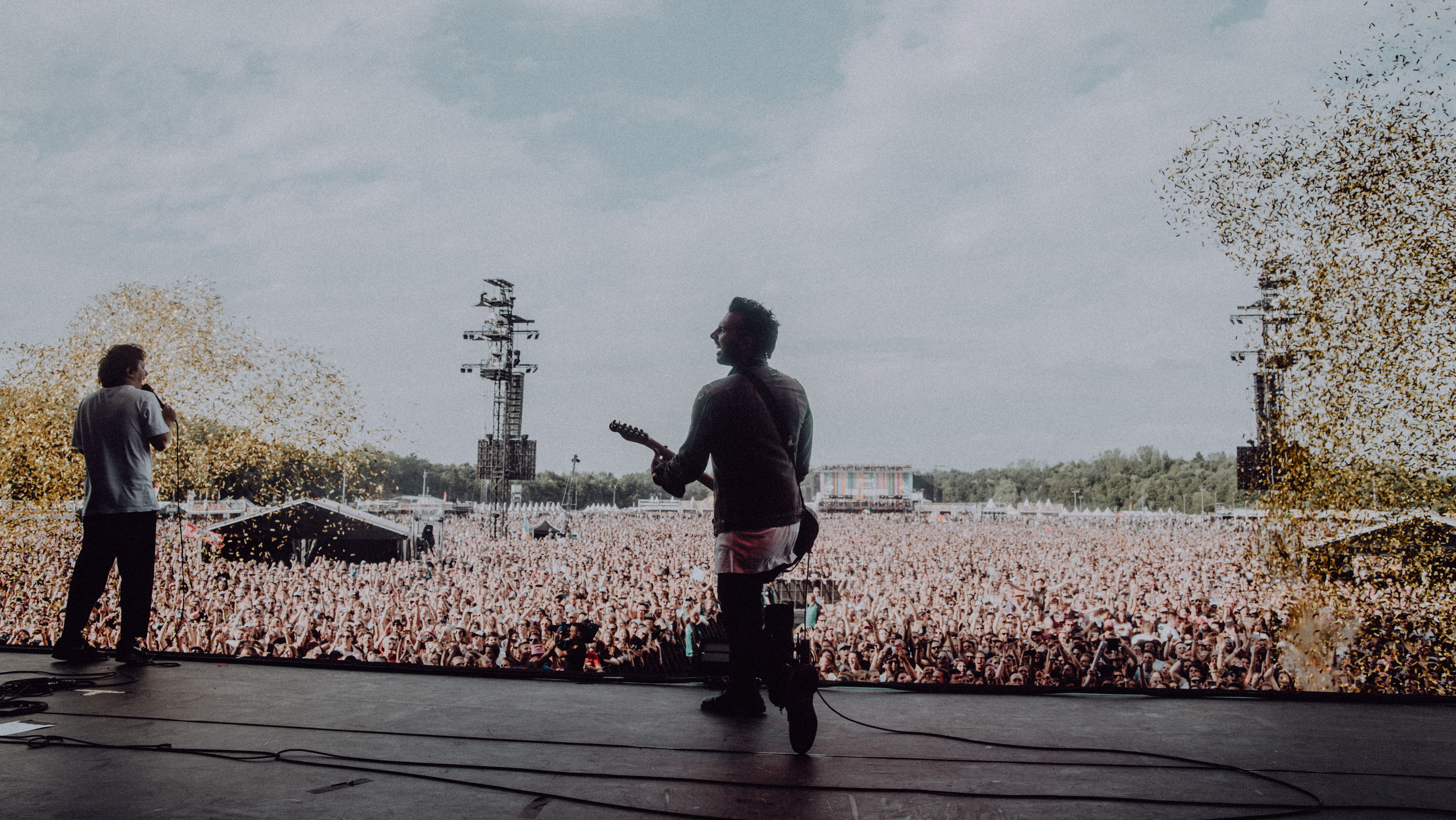 Nothing But Thieves live at Pinkpop Festival in 2018. (c) Jack Parker

I guess it’s also hard to be hopeful now, of all times.
It’s difficult to be hopeful when you don’t know what to be hopeful for. There’s so much cloudiness and confusion right now, but the best people are those who can be bright through a miserable day. That’s something I’ve been trying to do during lockdown, just living quiet and stoically. I can be happy with very little, all I need is my friends and family – the rest, in a way, is just a distraction. Some days you just want to travel and play, so I guess it’s a balance you have to try and strike. I try to where I can; it’s good to practice slowing down. People need to learn to do that more.

So you have There Was Sun, the glimmer of hope, and then you’ve got Can You Afford To Be An Individual? That one is a whole new monster, the flip side of the coin and by far your heaviest and most politically charged song to date.
Oh man, yeah. If another band released that song I’d be in awe. I’m pretty impressed with it, and it’s definitely one of my favourite rock songs we’ve done or that I’ve ever heard. It’s got everything I like about rock in one song. It’s completely pessimistic and lunatic, the lyrics are fantastic and Joe absolutely smashed it. It’s not even saying, “here are the answers”, it’s just holding up a mirror like, “this is you. Deal with it. It’s disgusting and ugly”.

It’s insane. Vocally you just get angrier and angrier, something which we’ve never heard from you before.
Don’t get me wrong, Joe may have written the lyrics, but we’re best friends and I’m just as angry about all of these topics as he is. I had to let all of that out in the vocal booth. I decided to release all of it. The problem, though, is that I’m normally not very good at that. It was important for me to do this with my voice, and so I went as nuts as I could. I also love the juxtaposition between that anger and the beautiful, Middle Eastern-guitar lines.

I got flashes of Immigrant Song from it, too.
Haha, yeah.

So you’ve got a song like Individual, but how can music contribute to a shift of societal mindset during hard times?
The way I think you can contribute best is by just raising awareness. This album has no answers! Like any good album with a good message it just holds a mirror up to what you are and what’s going on. One of the biggest things I preach is self awareness, and from that come human and planet awareness. We live with this fog about who and what we are, but when you wipe that away and find out who you are you then learn to care about others. I believe that kind of grassroots awareness can make change. There’s this old saying, “you can only change others if you change yourself”, and that’s what I want to do. In turn, it makes you aware of the planet and other people. Moral Panic does that, it holds up that mirror and asks if you’re comfortable.

Next autumn you’re – hopefully – hitting the road, including your biggest headline shows to date at the o2 Arena and Ziggo Dome. I feel almost hesitant to ask, but what can fans expect from the Moral Panic Tour, restrictions permitting?
I think we said this last time we spoke too. We have these live streams coming up, but I feel like I’ve almost forgotten what I do. I’ve really zoned back into planet Earth. I don’t know when everything is going to happen again, but my fingers are crossed for the summer. We’re going into another lockdown here in London and Essex; there just needs to be some sort of radical change, and this is just for one area of the country. We tour cities all over the world, and I just don’t know when it’s all going to come together again. I’m trying to be realistic – Dom is the optimist in the band – but I do think summer festivals and our shows at the end of the year will go through. Up until the summer I don’t think there will be anything. We’re just going to keep releasing music and connecting with our fans while we wait.

The music industry has been hit incredibly hard by the pandemic. What can it learn from these last seven months when we look forward to such an uncertain future?
It’s tough, that’s a really good question. There is this sort of rage against, well – let’s talk about the UK. Rishi Sunak said last week that the arts are a luxury and that people in every level of the arts industry should retrain and look for other jobs. To say the arts are a luxury compared to, say, sports – which will always be subsidised – is an absolute insult to me. Both the arts and sport bring people together and both are good for your mental health. It’s a joke to me. I don’t know how to comment on that other than that people have to keep standing up to it. I’m scared that grassroots venues will go under, but we will always help fund our local in Southend whatever happens. I just hope people don’t stop just because our asshole Tory government says it’s a luxury just because they don’t understand what people are and what they need. Just stay strong. Moral Panic comes out next week (23 October) via Sony/RCA.