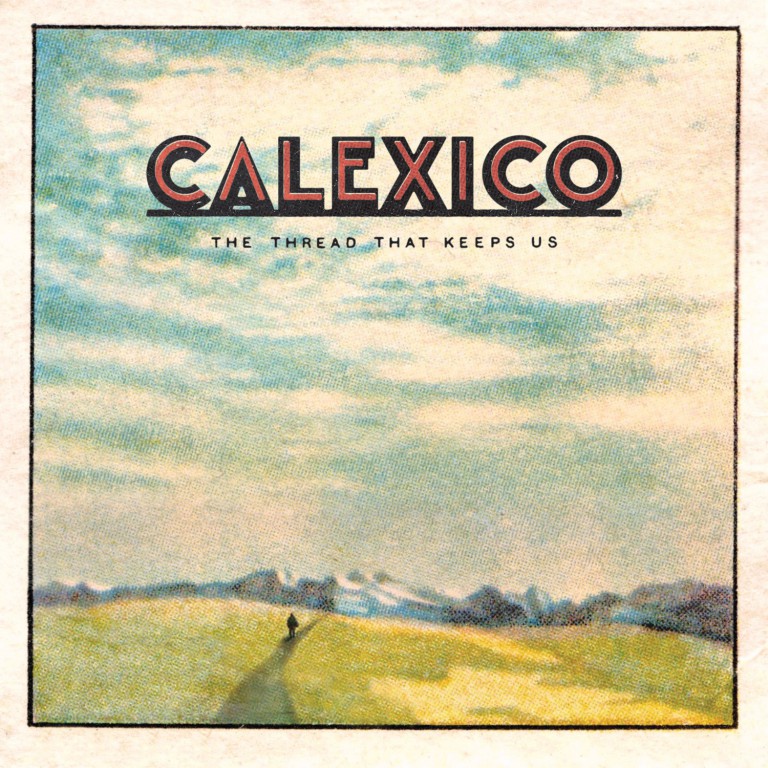 The Thread that Keeps Us is Calexico’s tenth album (if you include website-only Aerocalexico), taking them into the double figure territory of veteran indieship. That point where words like stalwart and seminal get thrown around and everything they do is a supposed ‘return to form’ regardless of what came before it. There reaches a point where a band has to accept that the number of new listeners they get becomes smaller and smaller with each release, regardless of the quality.

For some bands, they’ve built up a big enough fanbase that this isn’t a problem. The numbers may be getting smaller, but they were massive at their peak so it’s still a relatively large number. Bands like Wilco, for example, whose classic album Yankee Hotel Foxtrot propelled them into the leagues of legends. Calexico should have had that moment with Feast Of Wire. They deserved that moment with that album. Yet though they’ve built a respectable fanbase, they’ve never broken into those upper echelons of indie superstardom.

So what does this, Calexico’s ninth official studio album, have to offer to those who haven’t already been won over? With a seven-strong line-up surrounding core members Joey Burns and John Convertino, you might expect something a little more ambitious. Once again the line-up features many new faces in an effort to keep things fresh, avoiding the comfortable patterns that build when the same musicians make music together again and again. The band recorded this album in Northern California, away from their spiritual home of Tucson, Arizona. There are clear strides being taken to give the album something different from what came before.

The album opens with lead single End Of The World With You, which Joey Burns described as a song drawing influence from the bands of their youth, like Pavement and Sebadoh. Though the lineage can clearly be traced in the song, the result is a disappointingly forgetful song which centres around a chorus that meanders without direction. This hark back to 90s indie only really rears its head again on Eyes Wide Awake, a song which strongly channels Pixies Where Is My Mind?, and again one of the weaker songs on the album.

The band are usually at their strongest when the mariachi and conjunto elements are more prominent. It’s the key element that has always set them aside from the rest of the safe- American-indie- band pack and made their sound so unique. Spanish-sung Flores Y Tamales makes cumbia sound fresher than anything Ozomatli ever achieved after their first album. It doesn’t always land though, with Under The Wheels built around the sort of cod-reggae that you’d find on a mix-tape targeted at middle-aged Australians who think Resin Dogs are “pretty darn funky”. It’s with album highlight Voices In The Field where they get that balance just right, its hypnotic rhythm punctuated in the choruses by a brass fanfare.

Despite the inconsistencies, the album’s highlights are up there with Calexico’s best. The gentle, acoustic guitar led sway of Girl In The Forest masks its lyrical despair at the state of the world, filling you with warmth in a way that global warming never could. Bridge To Nowhere raises the tempo with a song which could easily have been a post-hardcore powerhouse in the hands of a different set of musicians, yet fits strangely well with Joey Burns’s restrained vocal delivery. The Town & Miss Loraine is a beautiful and touching song whose mandolin melodies are the aural equivalent of a hug. However, following this track with Flores Y Tamales seems like clumsy sequencing, something the band once did so well but which doesn’t feel present on this collection of songs.

This album probably won’t be the one to bring Calexico to a new set of listeners. It’s got some great moments, yet it doesn’t have that consistency and vision that once made the band one of the most exciting acts out there. For many this will be more than enough, but for a band of Calexico’s calibre, you can’t help wishing for just a little more.

The Thread That Keeps Us comes out this week Friday (26 January).