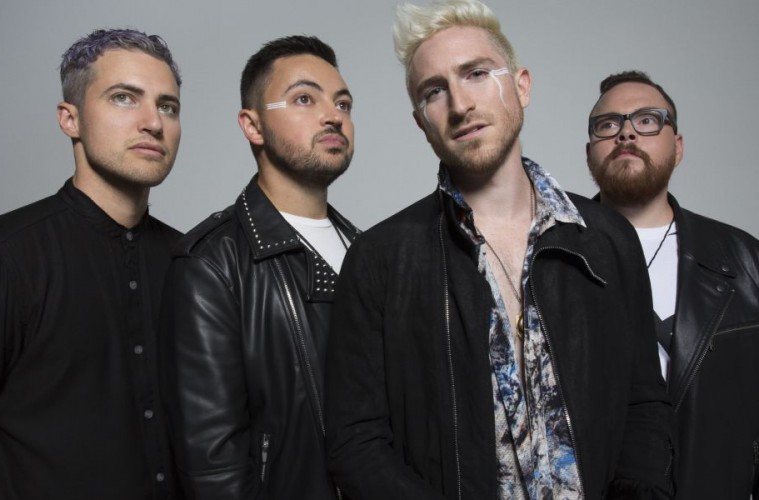 Catching Up With Walk the Moon: “We’re still a band of brothers”

It’s been a trying time for Walk the Moon. Towards the tail-end of the album campaign for 2014’s Talking is Hard, band communications broke down and various isolated issues ensured that the group had to put a halt to everything they were doing in order to reflect on the state of the band. Had it not been for a half year off in 2016, you could suggest that the band may not have even existed today. Luckily, though, they pulled through and last year put out the acclaimed What if Nothing, their fourth LP. We caught up with frontman Nicholas Petricca ahead of his band’s show at the Melkweg in Amsterdam to discuss the album, visuals and reconnecting the band.

Hey there Nicholas, how are you?
I’m doing great thanks!

You’re back on the road in Europe after nearly two years. How’s it been?
We have been longing for Europe and we’ve wanted to come back for so long. I’m relieved that we’re back here, and it’s felt so good! We’ve already visited one place which we’d never seen before – Warsaw in Poland – and that’s always a great feeling. We’re visiting all these places which, as you said, we haven’t been to in a couple of years, and it’s bringing us all of these great memories from past tours. We’re excited to share new music with all the fans, too.

Let’s talk about What If Nothing. Tell me more about the story behind that album and the period leading up to it.
Sure. We were coming off of the hurricane created by Shut Up and Dance, and then we forced everything to a half. Part of this was due to my father suffering from Alzheimer’s. We took a long break, and in that time we experienced the first moment where we had to consider our lives away from the band. We realised that there were a lot of unsettled and unspoken issues, and we weren’t sure if we could come back and make a brand new album. Fortunately, I’m happy and proud to say that we worked through the issues to make something which was very real and very vulnerable in terms of its lyrical content. We worked with two amazing producers, too. The first one was Mike Elizondo, who has done everything from Twenty One Pilots to Mastodon. We also worked with Mike Crossey, who has worked with bands like The 1975 and Arctic Monkeys. He’s a mad scientist who we all love, and both guys really helped us take the songs to a higher level. They were also down to just let us drive when we needed to be ourselves, allowing our tastes to take over.

It’s a very eclectic album, much like most of your work. Was this sonic approach the intention from day one?
Yeah! You know, when we got back together to make music, everything coming out of us was extremely varied. It was dramatically different, and so we made a conscious decision not to question it and to say that everything which came out of us was Walk the Moon. There’s no song that we wrote which we said could not be a Walk the Moon song, because by definition what comes from us is by us. That created a safe space for us to try everything we wanted to, and that’s what you get on this record. I think one thing it gives the album is drama, particularly dramatic shifts in tones and sounds.

Last time I spoke to you, we discussed overcoming the commercial impact of Shut Up and Dance (above). Two more years down the line, and it’s still a massive song. Did you feel under any more pressure to surpass its commercial success?
There’s always going to be that question mark until we have something which is also a global smash hit, but as far as doing it again is concerned, we just don’t think of it like that. The best move for us was to make what we wanted to make, and to not attempt to recreate Shut Up and Dance.

Talk me a bit through the artwork; I’m curious.
We were all really drawn to to this sort of surrealistic work by various visual artists, and it seemed to capture the sense of otherworldliness or an alternate outlook on the world that we all live in. I think that’s how we felt, at least emotionally. We’re a few years older, we’ve been away and we’ve seen the world, and it’s just not the same sort of ecstatic Walk the Moon world anymore. It’s a little bit darker, a little bit more psychedelic. We happened to reach out to one of the artists we were interested in – this amazing guy called Felipe – and he was excited to work with us. This really blew our minds, as we were all just fans of his work. He goes by the name The Invisible Realm on Instagram, and he does this surrealist college art. Together with him, we created this character, a Sky Man, on the album cover. Our character also sees himself grow up from a boy into the man on the album covers for the singles One Foot and Surrender. He represents a person experiencing change.

Is the accompanying album title thus a nod to there potentially having been no record at all?
Yes, yes. It came out of a voice note; I was rambling and sent it to the band as I was talking about this theme which felt like it was recurring in all sorts of places in our lives, this idea of what if it was all for nothing. Or, in the same breath: what is there’s nothing stopping us, or what if it’s the start of something new? It was also in part a reaction to our country electing Donald Trump as president, and us going, “what the fuck is going on?” and not knowing what the future could hold. My personal love life also had an impact on the album title. What if you spend so much time cultivating a relationship which just disappears, but then creates space for something new? It’s like a dualistic cycle.

I see. Now, eighteen months down the line, how is the inter-band dynamic and how much has changed?
I think communication is the one thing which has really been upgraded within the band, and that’s also what was a real source of the rifts we were experiencing before we took a break. Like any family or relationship, we have bright days and we have dark days. This is especially true for a family on tour, as there isn’t necessarily a lot of time and space to dedicate to talking about your feelings when you have to run from one show to the next. We’re still a band of brothers, but we’ve recommitted to each other and to this journey. I think that as long as we can communicate like this, it’s all gonna be fine. What if Nothing is out now, and you can stream it below.