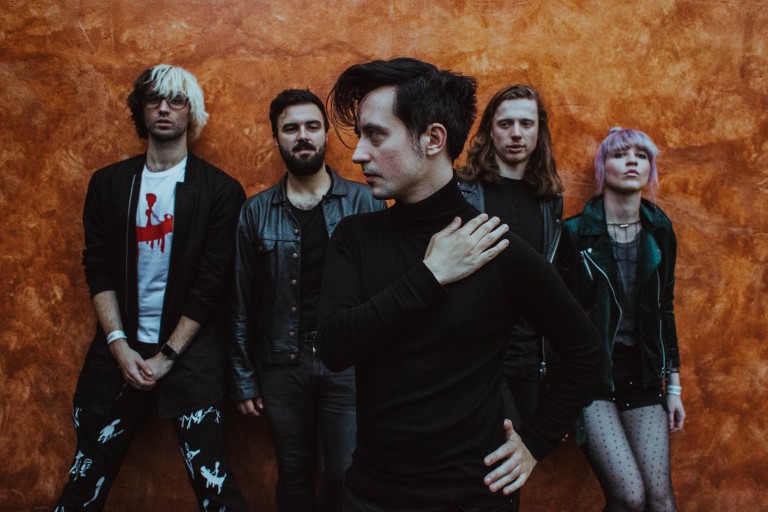 Catching Up With WHITE in Amsterdam

Earlier this month, Scottish quintet WHITE took their infectiously frivolous live show to the Paradiso in Amsterdam. Janneke Stam caught up with vocalist Leo Condie and bassist Lewis to discuss new album One Night Stand Forever, the musical climate at home in Scotland and their relationship with Holland.

I’m good, too, thanks. Let’s talk about your album One Night Stand Forever, which came out this year. Could you tell me a bit more about the recording process?
Lewis: “Yeah! Well, it’s been a collection of songs since we started being a band, like three years ago or something. We started out writing songs and it was just four of us, before we knew our drummer Kirstin. We wrote about five tracks, and then she joined the band. Together we wrote maybe another 20 songs and pieced everything together. So the album has actually been on quite a journey – not in the order that it was placed, but for us listening to it – from a songwriting standpoint, a production stand point… throughout that album, the sound has really evolved and it brought us to where we are now. Living Fiction is the first song we recorded on that album and Sweat was the last, and they sound kind of similar, but they also have huge differences.”

Yeah, I saw that three of the songs also appeared on the EP you released last year, right? Leo: “Yeah, we first put that EP out and we felt like Private Lives and I Liked You Better When You Needed Me stood out on the album really nicely, even though we had put them out before. We just wanted to release the best collection of songs we had, and that was what One Night Stand Forever became.”

What did you draw from for lyrical inspiration?
Leo: “I like quite literate lyrics. No, not literate… I mean plain but poetic lyrics. I quite liked this theme of darkness, of people having things hidden in their lives. This idea that everyone has a front facing personality and that there’s also a hidden side to them. That comes up quite a lot on the album and was something I was really interested in, because I feel like everyone has their lives laid out on social media, while it’s obviously not their actual life – it’s just one side of it. I guess we do that with the band as well, we have to have a certain persona online. But it were the things behind that I became interested in.”

Were there any specific moments or events that happened which made you go, “Oh, I need to write this down”?
Leo: “It was more just like singing random words and seeing what sounded good. Although, another source of inspiration that we have is this book by an artist called Ed Ruscha, a Californian guy who paints really big canvases with just words on them. The book that I’ve got has got like 500 of them in it. They’re all quite odd phrases, and it reminded me of Talking Heads and David Byrne, things like that. One of the paintings was called One Night Stand Forever, so that’s where the name came from. Sometimes we’d just turn to that book for some lyrical jump-off points. There’s something about seeing a phrase painted out, someone spending ages on this little phrase and you’re like ‘Oh, maybe we could use this in some way!’, especially when you’re stuck.”

When you were recording the album, was there a certain point where you sat back and felt like it was finished?
Leo: “Not really, because the set up that we have is, like, we write songs while recording them. And Lewis lives in the studio! Literally, not a metaphor, the place where we record is in his house. So it’s this continuous process of building on ideas any of us have, so you never really know when to stop, because it’s not like you only have two weeks in a studio.”

How do you feel about the music scene back in Scotland?
Lewis: “There’s a massive amount of bands in Scotland and everyone’s all friends, everyone knows each other and we all go see each other’s shows and those sorts of things. I’ve been mixing a band called Vegan Leather recently, they’re really lovely and they have this electronic, kind of Daft Punk thing going on. I really like them at the moment. But there are hundreds of bands, it’s an amazing music scene back home.”

Leo: “We’ve got this thing called the Scottish Album Of The Year Awards every year, and they are pretty good at highlighting the best things that come out. Last year’s winner was this girl called Anna Meredith and she’d done an album with techno, danceable, but also classically inspired tracks. She’s a classical composer who also makes pop music, so that was very interesting. Yeah, the music scene is pretty good at the moment.”

I saw that the Dutch website 3voor12 crowned you as the Best Festival Act Of The Summer, and you’ve also performed at quite a few Dutch festivals recently. What’s your relationship with The Netherlands like?
Lewis: “I think it’s quite weird. We played Eurosonic two years ago and we thought it was so cool that we got to go to Holland to play a show. From then on, we did a show at London Calling in the venue we’re playing at tonight. We were on stage at like two in the morning and had no idea if anyone would be there, but we were just like “Let’s do this, it’s going to be amazing” and it was such a fun show, everyone in the audience was jumping about and going crazy, we had such a good time. We were like ‘I like it here, this is fun!’ Since then, we played some more festivals.”

Leo: “Yeah, we did Metropolis as well, that was really good. It’s in Rotterdam.”

Lewis: “And Where The Wild Things Are!”

Leo: “That was at a Center Parcs, which was cool. Then we did London Calling again.”

Lewis: “We also played on King’s Day and on a TV show, De Wereld Draait Door, that was fun. We played like a minute and a half of music, which was quite funny, because we prepared a song and then when we were sound checking, we noticed that the visuals were for a different song – like the music video for a different song. And they were like ‘Oh, you’re supposed to be playing Living Fiction’, which was one of the singles that we had out, so we were like ‘Fuck!’ So within about 20 minutes, we reprogrammed everything and somehow managed to make it work. Aside from that, it was really good fun.”

Leo: “And since we did festivals over here, we got involved with a label over here that released One Night Stand Forever, Gentlemen Recordings. That was really nice, as they just took us on and we did the album with them this year. As Holland seemed to be into the music, we just thought “Why not? Let’s see what happens.” It’s been really fun so far, and we’re getting a really good reception.”

Do you notice a difference between Dutch crowds and the ones back home?
Lewis: “I feel like the Dutch audience are just there to have fun and don’t give a fuck about anything, and they’re just like “I’m gonna jump about like a crazy person, I’m gonna dance, I’m gonna enjoy myself” and it just feels like everyone’s all in the same room for the same reason. In the UK you really have to win the audience over and it’s more of a battle, which is absolutely fine as well. Dutch audiences just like a party.”

Feel free to come back for a party any time! Finally, what can we expect from WHITE next year?
Lewis: “Well, we’re currently working on new music. We’re working with a guy in Glasgow called Bovine, who we also worked with for the release of Sweat recently. It’s a lot more electronic sounding. We’ve taken the parts of our live set that we enjoy most and just, like, put them on steroids. We’re trying to turn it into something even more extreme than what we currently have. We’ll see how it goes. There are a few new songs in the set tonight, so let me know if you like them! But Sweat is kind of a bridging song. We released the other version to be like “Oh, look at it this way…”. We’ll definitely be more dance and electronic inspired for the next stuff. At least, that’s what it looks like right now, but it changes pretty much every week. This is where we’re at right now, though.”

One Night Stand Forever is out now, and you can stream it below.