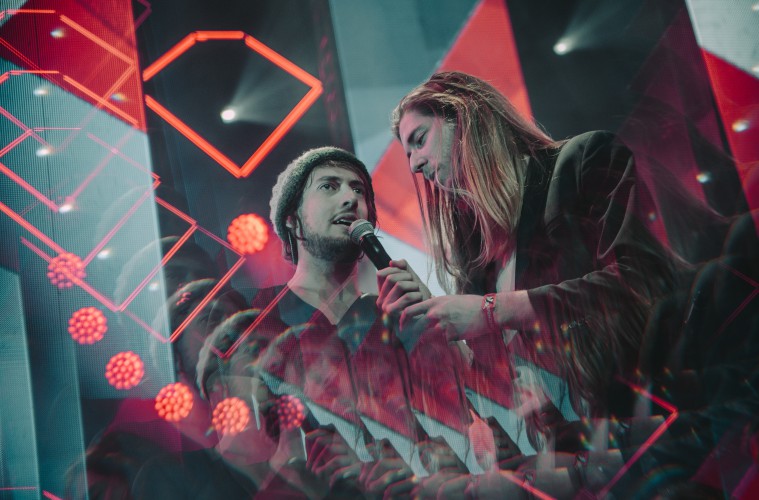 Local music. Where would we be without it? For every international superstar who graces our stages, there are tons and tons of artists whose big break is just around the corner, hidden within the depths of toilet venues and the infamous club circuit. The final day of Eurosonic Noorderslag 2018, Noorderslag itself, was all about celebrating these bands and giving them an important stage in front of thousands of visitors. For one night only, De Oosterpoort was transformed into a Dutch musical paradise with something for everyone.

While pop vocalist MAAN took on the Kleine Zaal, and while Mooon packed out the Marathonzaal, it was up to The Overslept to give the venue entry hall its first big set of the night. The pop-punk outfit are one of 3fm’s emerging talents, and they’ve utilized this honour to boost the presence of alternative music within the Dutch musical climate. And they seem to do it well, because the crowd absolutely lapped up their catchy and energetic pop-punk cuts. 2018 is going to be a big year for The Overslept, so don’t be surprised if you see a lot of them. The same applies to Amsterdam’s brand new TRAUDES, whose schizophrenic blend of indie funk, RnB and rap works even better in practice than it looks on paper. Frontman Benjamin Traudes and his band carry a sense of unrivalled energy with them wherever they go, something you’ll probably be able to gauge after one play of debut single Back Down. “I’ll tell the cops to come, be ready now” sings Traudes on the aforementioned with the swagger of Bruno Mars and Eminem’s love child. It’s a good combination, honest. One of the evening’s biggest draws, MY BABY, didn’t need much introduction as they entranced Groningen with their irresistible mix of funk-infused psychedelic blues. Frontwoman Cato van Dyck (an absolute beast on guitar) is one of the nation’s strongest, and paired with her bandmates Joost van Dyck and New Zealand’s Daniel Johnston she fronts an absolutely wonderful project. It thus shouldn’t come as a surprise that the likes of Glastonbury Festival have snapped them for appearances in the past, because it’s big events like these which MY BABY are made for. Another Dutch artist whose international appeal somewhat trumps her national presence is bedroom pop vocalist Naaz, whose soulful voice soared through the entry hall as she proved exactly why the hype surrounding her first demo was so worth it. Hard rockers Tusky brought a necessary dose of high-voltage punk rock to the table not too soon after that, with former John Coffey guitarist Alfred van Luttikhuizen taking on vocal duties as his former bandmate David Achter de Molen watched on in the crowd. Early single Folly hits as hard as is humanly possible, with the band later on inviting one fan to the stage to partake in a beer-fuelled stagedive. It’s only early days, but Tusky are here to show you that heavy music is back on the way up. The main attraction of the evening, the Dutch Popprijs, kicked off the second half of the festival evening in De Oosterpoort’s main room, with Utrecht’s Kensington winning the 10,000 euro prize for their sublime services to Dutch music. Whether you like their stadium-ready rock or not, you’ve definitely got to admit that the things they’ve achieved in the last few years are generally abnormal for a ‘little Dutch group’. Little is no longer a word you can use to describe Kensington, and that finally became apparent when they won a prize which many expected they’d take home many years ago. Away from the glitter and confetti of the Popprijs, Dutch/Turkish outfit Altin Gün pulled off one of the night’s best performances. The project, founded by Jacco Gardner’s bassist Jasper Verhulst, sees a mix of Dutch and Turkish musicians come together to perform a quirky brand of psychedelia-infused Turkish folk. Popular single Goça Dunya stood out, something which shouldn’t come as a surprise when you consider the addictive nature of its funk-laden grooves and percussion. The Megan de Klerk-helmed EUT subsequently took on the entry hall as the evening careered towards an end, tearing the room a new one in the process with their amusing brand of britpop and indie rock. De Klerk’s sickly sweet vocals are the perfect accompaniment to this somewhat quirky sound, meaning that their 3fm emerging talent nod is well within expectation. Standout track Supplies is one of the best tracks of 2017, bearing a chorus so catchy that you’ll have it stuck in your head for days on end. Rotterdam’s very own Iguana Death Cult found themselves in a slightly sticky situation not too long later, having been thrown in and amongst an extremely busy part of the timetable. Their hyperactive garage rock, spearheaded by frontman Jeroen Reek, is nothing short of excitable and manic, and it managed to go down a treat for those who made it. The Mauskovic Dance Band pulled a full room over on the other side of the building for their groove-inflected dance party, with frenetic trio De Likt allowing crowds to go on late into the night within the chilly confines of the entry hall. With so much going on elsewhere, you’d be forgiven for forgetting that the intriguingly morbid Charlie & the Lesbians had been handed the graveyard shift set in the sparse Marathonzaal. Not that this stopped frontman Charlie Hoeben and his band from going all out, though, because as time passed their set only got better. From a qualitative perspective, you could suggest that Noorderslag 2018 found itself operating at a very high level, with 2018 looking to be an absolutely spectacular year for local music. Here’s hoping. Eurosonic Noorderslag returns in 2019. Check back tonight for our definitive Top 20 countdown of this year’s best performances.