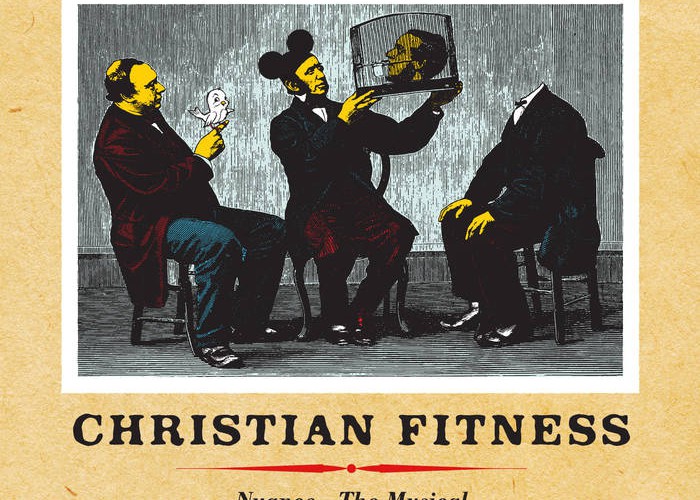 It’s hard to believe that Andy Falkous is already on album number five of his not-a-solo-project solo project Christian Fitness. Having only been in existence since 2014, that’s more than an album a year. It always felt like an odd concept, the necessity for Falkous to branch out with a solo project having always been the driving force behind Future Of The Left. Side projects are often associated with band members who may not be the figurehead of their day job, or to explore collaborations with others. This is neither of those things, the only other instrumentation on the album came from fellow Future Of The Left bandmate Jack Egglestone. The main difference between the two projects seems to be the softer vocal delivery style that he adopts with Christian Fitness, and the flexibility to do what he wants when he wants.

With his fourth album Slap Bass Hunks, Falkous released his strongest and most realised collection of songs to date. It felt as though there was an organic progression with what had come before resulting in an album that played to the strengths of everything that the project represented. Bees Mode remains one of the best songs he’s ever written, with its gorgeously fragmented outro cutting through the drunken swagger of its verse. The whole thing was so well executed that it made you wonder if it would be possible to fine-tune this sound any further, or if there was nothing but stagnation left in the project. Almost as though second guessing that train of thought, Falkous decided to make Nuance – The Musical, an entirely different beast.

Fundamentally, the biggest difference is that the synthesizer has replaced the guitar as lead instrument of choice. Falkous has flirted with synthesisers before, as the infectious Manchasm hinged on a staccato synth line that was originally written to annoy rock purist fans of the band. However this isn’t just a case of a few lines here and there; there’s a wide array of everything from orchestra hits to synthesized strings on these tracks, you can no longer accuse it of being an act of contrarianism. That’s not to say that the guitar has been disposed of entirely, tracks like Fanbase Only Song, Group Fink or Full Morrissey sound very much more like more of what had come before. On Kill The Bored, which was the first track released in advance of the album, Impressions Of An Urn and Hamsterland, the guitars are the garnish, if they’re there at all. The progression comes as a particular surprise when you consider what had come before, but you feel like that’s the joy and freedom of what this project is all about. Falkous is making the music he wants to make whenever he wants.

Clocking in at just over 28 minutes, this is the shortest album he’s released yet, feeling like it’s finished almost before it’s begun. Falkous is a master at knowing how to leave the listener wanting more when it comes to album length, and though this is no exception, some of them are torturously trimmed. Fanbase Only Song, opens the album abruptly coming to an end just as it feels it’s getting started. Hamsterland is the only song on the album that breaches the four-minute mark, and always feels like it’s started too early on each listen through. Known for his visceral lyrics, and amazing word-play, there’s more than enough to get stuck into with this album, with the lyrical density as richly populated as ever. However, one target in particular gets a particularly specific namecheck this time around. Amongst the “Special fried rice connoisseurs” and “Former teachers who have recently started sharing racist propaganda on Facebook”, it’s hard not to notice a song title like Full Morrissey. The former Smiths frontman has done a lot to make it difficult for his fans to separate the art from the artist lately, and while his hot takes used to feel relatively sincere, if a little extreme. At this point though, he’s reached the Gallagher brothers level of using controversial statements as a means of advertisement knowing that it will end up being more newsworthy than yet another solo album. “Fe fi fo fum I smell a half-finished record in need of edge, in need of outrage” as Falkous declares on Full Morrisey.

As ever with Falkous’s ventures into more experimental territory, there are parts which feel so natural and so satisfyingly good that you wonder why it’s taken them so long to happen, and there are parts where the concept is so ridiculous it feels more like a statement than something to be enjoyed on face value. Take Kill The Bored for example. Its verse creates a paranoid horror-scape, its synth strings and orchestra hits building a sense of intensified dread that gives Falkous’s spoken narrative a sinister edge. What follows next is a relatively blissful refrain creating a severe contrast with what came before, but with a thin undercurrent that connects the two. Then seemingly out of nowhere the song cuts to a bizarre combination of jazz guitar flourishes combined with what sounds like the melodica line from Fugazi’s Version. You know this is no accident, and that there’s probably more meaning to this contrast and utter ridiculousness of progression, but what exactly that is I couldn’t tell you. None of this takes away from the fact that even if there is a cleverness to this statement, the song itself isn’t particularly enjoyable to listen to as a result.

Conversely, the ambitious synth strings that underpin the similarly moody The Mood As The Ship Started To Sink Was Downright Depressing find a way to retain that progression and create a song that brings something new to the project. Nobody Exists On Purpose is another example of a successful combination of the synth and strings, its rhythms almost danceable and strangely hypnotic. The ambitious massiveness of Hamsterland is the perfect way to close the album out, unapologetically huge from its opening notes, its fidgety snare rolls giving it an almost militarial feeling. Its closing refrain of the repeated lyric “This is a bit at the end” almost feels like a meta reference to Falkous’s song-writing habit of giving a song a soaring step change ending. At such a short runtime, there are some tracks here that work better than others, but what’s particularly reassuring is that those tracks which are most successful are those which sound least like what’s come before. Some tracks don’t go on long enough, some go in frankly confusing directions, but there’s a lot to love on this album. Knowing Falkous, he’s already underway writing album number six, who’s direction feels like it could go in a number of ways. As time goes by the distance between Future Of The Left and Christian Fitness continues to grow giving the whole project an identity of its own. Listen to Nuance – the Musical here.