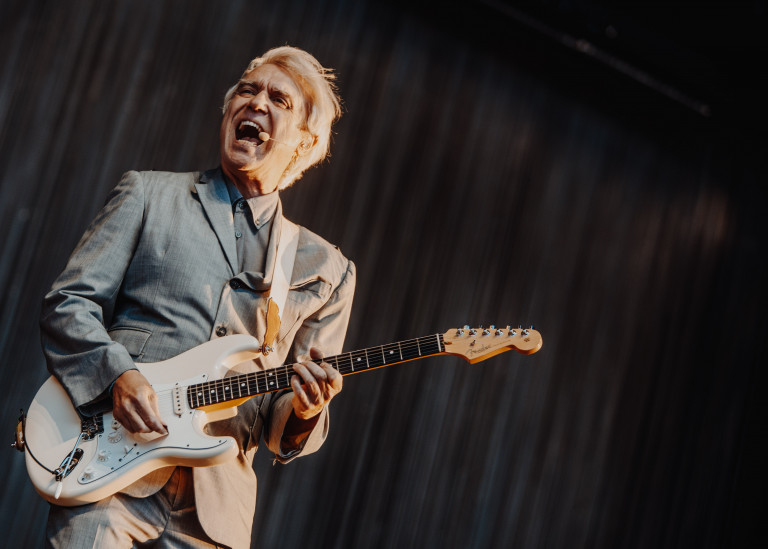 Sometimes in life, there are moments where you think you’ve really seen it all. Moments where you ask yourself if there’s anything out there which would suffice as a means of grabbing your attention without letting go. Moments which essentially make you pinch yourself as you mouth the word, “wow“. David Byrne (of Talking Heads) is the kind of performer who ticks every box imaginable, and he does so with utmost grace and vigour. He’s a multi-faceted and multi-skilled sonic magician whose back catalogue has more cultural impact than anyone who has lasted even half as long as him, and time upon time again he proves exactly why this is the case. Take his current live production surrounding new album American Utopia as a prime example of this, as it’s single-handedly the best live show you’re ever going to encounter in this lifetime.

As live shows go, there isn’t anything quite like it out there right now. In fact, it’s safe to say that there probably won’t be anything ready to rival it for quite some time. With new album American Utopia well and truly under his belt, Byrne decided to expand his creative horizons and attempt to put on – as he himself states – “the most ambitious live show since Stop Making Sense“. Any well-versed music geek will know that Stop Making Sense is undoubtedly the greatest live show of all time, having cemented Talking Heads’ status as an incendiary live band with a back catalogue to match. It put the band on a cultural pedestal which – 1991’s breakup aside – they still haven’t gotten off, and it’s given Byrne the ability to further his career to the point where it seems almost impossible to predict what the hell he could possibly do next. That ‘next’ turned out to be the hyper modern tour surrounding new album American Utopia, which has received critical praise the world over and stopped off at Amsterdam’s packed AFAS Live last night for yet another exercise in live music excellence. It’s one thing to call a show “good” for the sake of satisfaction, but this really was good. Beyond good, even.

The American Utopia tour is built on simplicity, and it pays off. All twelve performers are fully mobile, attached to their instrument as a sensor-led light follows them around the (empty) stage during each song. It’s something which nobody has done before, and it’s something which Byrne pulls off with no difficulty whatsoever. The entire spectacle kicks off on the subdued Here, placing Byrne centerstage behind a desk with nothing but a plastic brain at his disposal. The song allows him to introduce a 3,500-strong crowd to different parts of the brain, explaining their uses as two dancers slowly make their way into the crowd’s vision. Byrne wanders across the stage, brain in hand, like a lost high school teacher searching for purpose, finding it as the song comes to a close and the party slowly gets started. And when we say party, we really mean it. A one-two of bona fide club banger Lazy (a collaboration with X Press 2) and Talking Heads classic I Zimbra follow as Byrne’s live band enter the stage one by one, each bringing their own unique vibe to the show. It’s quite remarkable how all twelve members make for the same performative impact regardless of their role, but it only goes to show how special the American Utopia tour really is.

American Utopia is, of course, the focal point of the entire night. It’s Bryne’s first solo album since 2004 (not counting his 2012 joint record with St Vincent), and it’s another example of his forward-thinking nature as an ever-evolving artist and cultural icon. Not only is it an album, but it’s also part of a larger audiovisual project called Reasons to be Cheerful, which aims to spread positivity around the world. Ahead of lead single Everybody’s Coming to My House, Byrne talks of the difference in emotion between his version and that of a children’s choir, indicating that their version inspired him to look at the song from a more inclusive standpoint as opposed to his suburban-rooted view. The song itself is a bustling electro-groove jam, incorporating a synth-based brass melody, sprawling percussion and Byrne’s own self-reflecting lyrical wit. It’s the standout track on American Utopia (on par with the absurdist and sarcastic I Dance Like This), and live it serves as the perfect bridge between Byrne’s modern day work and everything which came before it.

In and amongst tracks from American Utopia there are, as you’d expect, a handful of Talking Heads classics, and it’s in these moments where the generally stale Dutch crowd come to life. The early inclusion of Slippery People sets the bar high for the rest of the night, Byrne jolting about the stage like a hapless child as the crowd slowly emerge off their seats, hips shaking in sync with bassist Bobby Wooten’s infectious rhythms. Wooten is a shining star in Byrne’s live band, his never ending smile and pulsating grooves a staple over the course of the show’s 21 songs. Fellow classics This Must Be the Place (Naive Melody) and Once in a Lifetime featured roughly halfway, the former incorporating dry yoga moves while the latter allowed Byrne to stagger around the stage as he asks himself that one burning question: “Well, how did I get here?” It served as a unifying moment in the show, with the crowd slowly leaving their seats to move towards the stage.

It wasn’t until the spectacularly groovy Born Under Punches (The Heat Goes On) that the connection between the crowd and Byrne really hit top form, something in part down to the way he introduced the song. Taking a moment to talk to the crowd, Byrne explained how he’d often be asked if the live show really was, you know, live, and how journalists would continuously call his office to contest this fact. By introducing each band member one by one, Byrne showed the room exactly how Born Under Punches’ 2018 incarnation was constructed, slowly building up in intensity until the song well and truly kicked in. It served as a true celebration of everything Byrne and his band are capable of, and it did more than enough to silence any playback doubters. This marked an absolute high point in the show as it slowly careered towards an end by means of the ritualistic Bullet (featuring Byrne holding a lamp as the band circle him), artistic Blind (featuring a large spotlight projecting silhouettes against the chained stage walls) and main set closer Burning Down the House, complete with a crowd entirely on their feet and a closing conga line. Burning Down the House was a true celebration of everything that had come before it, and it was by no means the end.

Two encores followed as the show eventually reached a curtain call, the first featuring Road to Nowhere‘s marching band undertones and The Great Curves‘ energetic and rocking finale (courtesy of sublime guitarist Angie Swan), and the second stripping things down on an all-percussive cover of Janelle Monae’s Hell You Talmbout. The song’s lyrical content centres on the names of black American males who were unlawfully killed by law enforcement officials, with each victim’s name blared out by Byrne as his band instruct you to “say his name!” This went on for a good five minutes as the likes of Trayvon Martin, Mohamed Bah, Eric Garner, Jordan Davis and Dontre Hamilton’s names passed by, injecting a sense of political awareness into a show filled with increasingly subtle hints. Byrne’s Reasons To Be Cheerful project intends not only to spread positivity, but also to raise awareness regarding a multitude of sociopolitical situations around the world. At one point in the show, Byrne even introduces a song as a means of facilitating  change and “how we can all change, even me”. It felt humanising to see him admit that even he himself can do better, and it was all the more reason to admire every aspect of the American Utopia live show. When he claimed that it was the most ambitious production he’d put on since Stop Making Sense, he wasn’t lying. His claim couldn’t be more truthful, as the American Utopia tour really is a special force to be reckoned with. Every detail is taken care of, from the synchronised outfits (smart grey suits) and well-balanced setlist (nine Talking Heads songs vs. nine originals and three covers) to the technical side of things. With only two mainland European shows on the entire indoor leg of the tour, you could suggest that those in attendance at the AFAS Live witnessed something really special. American Utopia is out now.

All the images in this article are taken from a prior festival show on the same tour.