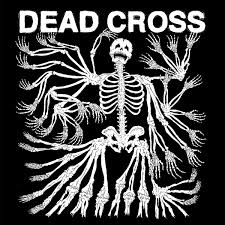 When America’s political climate was at its boiling point between 2015 and 2016, a party of seasoned musicians emerged from the chaos to share with us a piece of their minds. Amongst the hysteria we found hardcore-punk/thrash-metal supergroup Dead Cross, consisting of Dave Lombardo (Slayer, Misfits, Suicidal Tendencies), Mike Crain (Retox), Justin Pearson (the Locust, Head Wound City) and Mike Patton (Faith No More, Tomahawk) laying the heaviest beat-down on record about their views concerning the growing panic and fear. Having formed at the end of 2015, their self-titled debut Dead Cross had already been complete by 2016. However, due to the previous vocalist Gabe Serbian, another member of the Locust and Head Wound City, having left the band, they decided not to release the album with his vocals. In December 2016, Dead Cross announced that Mike Patton would be joining the band as their new vocalist. After having added Patton’s new lyrics to the album, they eventually released it last month.

Blasting off with the multi-vocalic, erratic album intro that is Seizure and Desist, it really sets the tone for this album and gives us an insight into what exactly inspired the making of Dead Cross.  The turmoil of the chaotic blast beats give off that sense of dread which the band was trying to nail. Speeding up into Idiopathic, Patton shows us that age is just a number, with some of his rawest screamo featured on the album. Whatever Patton rips up with his vocals, Crain glues back together perfectly with break-neck, screeching guitars. Next, the energetic Obedience School takes a stab at consumerism, featuring snarling lyrics about who gets to eat who in a harsh battle for first place on the food-chain. In Shillelagh, Dave Lombardo lets us all know just what kind of drummer we’re dealing with, with an impressive percussive intro and solid drumming throughout this entire speaker-shredder.

Halfway through the album, the band takes a turn towards a creepier vibe with Bela Lugosi’s Dead, a thrilling song about The King of Horror, Bela Lugosi, the iconic actor of Dracula. Resuming the reign of terror in the second half, Divine Filth hits it off with a gruelling blast-beat, and follows up with Grave Slave introducing a dread-filled scream by Mike Patton, shaking this kicker into existence. According to Dead Cross, the political debate in America is a mess right now, half of its citizens are unsure of the country they call home and the other half is rioting in the streets about their grievances. The Future Is Cancelled is one big, chaotic, rage-fuelled manifestation of everyone’s political frustrations. Gag Reflex, like most of the songs on this album, had me trying to decipher its lyrics for hours, but I’m afraid that only Mike Patton will ever truly know the meaning behind those, though they leave a lot to speculation. Last but not least, the brilliantly titled Church Of The Motherfuckers tears it down one last time, opening up with a booming bass blast and raspy vocals into a multitude of frightful voices, setting a tense, uneasy vibe throughout the song.

While it might not be the first album any of the artists have ever released, it is the very first album to be released in this formation, and what an album it is. With these four musicians combined experience and know-how, the world is primed to welcome another leading contender within the heavy metal scene, and hopefully with that, many more albums to come.

Dead Cross’ self-titled debut is out now. Stream it below.