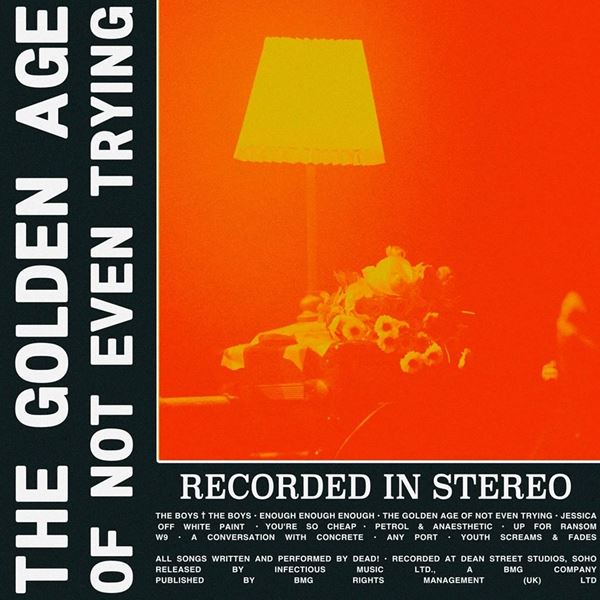 Dead! Try Their Hardest And Succeed on The Golden Age of Not Even Trying

Dead! don’t like to cut corners. The Southampton quartet have found themselves hammering away at the bare foundations of debut album The Golden Age of Not Even Trying ever since their inception some years ago, whether they’re aware of it or not. You see, every step Alex Mountford and co. have taken these last few years has somehow contributed to the sprawling success of a debut album which couldn’t have waited longer to come out had it tried. A spate of early EPs and gnarly DIY gigs (dubbed the Damned Restless Future shows) spanwed the basic elements of Dead!’s ethos, before stints on tour with Deaf Havana and Frank Carter further helped established their status as one of Britain’s hottest bands. Now, with The Golden Age of Not Even Trying a mere few days old, time has come to dissect its layers and figure out if the quartet really are worth the hype.

A swaggering The Boys † The Boys kicks off the album in the most bold, brash and abrasive manner possible. It’s here where session drummer Stephen North and bassist Sam Chappell intertwine in powerful fashion, utilizing each respective member’s cataclysmic mannerisms to form a solid backing for guitarists Sam and Louis Matlock. The brothers are an incendiary pair, and their manic interplay comes to life early on via recent single Enough, Enough, Enough. “Why am I so afraid of you now, darling?” asks Mountford here, namechecking the BBC midway through the ferocious, balls-out rock’n’roll banger. It’s complete with a solo which ticks all the classic rock boxes, making way for an ending that allows Mountford to exercise his vocal chords by way of some brutal screams. It’s something he attempts at various points throughout the record, demonstrating his multi-faceted vocal ability in ways which previous EPs has never shown.

“Disconnect from desire” rings out of the speakers at the dawn of title track The Golden Age of Not Even Trying, which does its best at presenting the world with Dead!’s fragile side. That’s not to say it’s a slow, whimpering track, though; on the contrary, the title track still packs enough punch whilst placing the energy largely on the back burner. Few moments (the grandiose ending among them) are reserved for energetic outbursts, during which Mountford’s vocals reach their rawest. The pulsating Jessica shifts focus to a rhythm-centric instrumental backing, once again allowing North and Chappell to team up and work their magic. “I like you better when you’re lying through your teeth, you like me better when I’m lying on the ground” claims Mountford during the chorus, painting a bleak-yet-honest picture of a disastrous relationship as his voice reaches a level of intensity which instantly draws you into the story.

The heaviest moment on the album is most certainly reserved for the destructive Off White Paint, which trudges along by means of a fearsome, chugged riff and haunting vocals. Mountford’s intensity hits its peak here, and his band have the perfect instrumental accompaniment to his expressive anguish. Once the breakdown kicks in, you’re sure to be banging your head to the point of needing a trip down the emergency room for sustained neck pain. This is Dead! at their gloomiest, even bordering on elements of black and doom metal in certain places. Old single You’re So Cheap follows, adding some anthemic contrast to proceedings by way of grunge-laden guitars and a catchy chorus. “Can you please just shut your mouth?” asks Mountford ahead of the chorus, directing his outbursts at that one particular individual who we’ve all met at least once in our lives. Petrol & Anaesthetic marks the halfway point on the record, carrying a powerful chorus and intricate set of guitar lines which once again demonstrate the Matlock brothers’ skill. It’s also worth noting the powerful punches packed by drummer Stephen North, who makes out an important part of Dead!’s arsenal despite not being an official member of the band.

Recent single Up For Ran$om brings the record back up to speed on what is probably its fastest track. An opening barrage of pounding percussion and grisly bass makes way for a prolonged scream (for Dead! standards) by Mountford, whose vocals are equal parts serious and playful throughout. Up For Ran$om contains the album’s most stadium-ready chorus (if that’s how you’re willing to describe it), one which is sandwiched between urgent verses and a deadly breakdown ready to burst pits open up and down the country (and planet, if their potential reach is truly acknowledged). “You’re so fucking handsome, baby; oh my god” declares Mountford at its close, his vocals filled with jealous rage as the track reaches a clattering end. It’s on Up For Ran$om where The Golden Age of Not Even Trying sets its qualitative bar highest, although the stunning W9 goes on to raise it even higher mere moments later. Its opening guitar line bears resemblance to Radiohead’s über-depressing A Wolf at the Door, both in its execution and in its bleakness. Mountford sounds confidently fragile here, a description which makes more sense when listening to W9 than it does in this article. He sounds like he’s ready to be broken down, all the while knowing that nothing will achieve that. As the track builds up, the intensity meter raises itself in subtle fashion, before calmly imploding and leaving the gloomy pieces scattered across the cutting room floor.

A Conversation With Concrete is the first sign of this album slowly heading towards an ending, having reached its peak on the one-two of Up For Ran$som and W9. That’s not to say that the final three tracks are weaker, though; in fact, they come pretty close to setting the qualitative bar even higher. A Conversation With Concrete follows all the formulaic ingredients which make a Dead! song so appealing, just about avoiding to sound by-numbers through Mountford’s infectious lyrics. Throughout the course of The Golden Age of Not Even Trying, Mountford has been able to tell poignant and intense stories through his lyrics, delivering them either grippingly, full of tension or with slight playfulness. “I feel alive again, I will never stop” he declares, sounding victorious in his delivery. Chappell’s bass is gritty and powerful here, with the Matlock brothers’ effects-laden guitar licks allowing the track to stray away from sounding too basic and predictable. Penultimate track Any Port is one of the album’s more accessible, radio-friendly cuts, something which is extremely audible from the off. “Can you hear me?” asks Mountford during the chaotic chorus, amidst a sea of caterwauling noise. Album closer Youth Screams & Fades is the perfect end to one of the best debut albums in a long time, injecting even more bleak intensity to proceedings and allowing the quartet to close their first chapter on a strong note. Its final notes depict scenes of hopefulness as Mountford uses a vocoder to his advantage, telling an empowering story as the world crashes and burns around him. Just like on the rest of the album, Dead! manage to present the listener with bouts of controlled chaos. Mountford and co. are so well-versed in drawing the control out of the chaos, and it’s this which makes so many moments on the record so captivating.

The Golden Age of Not Even Trying isn’t a concept album per se, however there are definitely moments throughout which sound and feel interconnected in a way which most alternative rock albums (to describe it loosely) don’t. Whether this is the result of accidental songwriting similarities or a deliberate attempt at interlinked conceptuality isn’t something we’re confident to admit, however what we can say with 100% confidence is that Dead! have come out and proved every single doubter wrong. They certainly haven’t cut corners or rushed things on The Golden Age of Not Even Trying, and this much is evident when listening back to it multiple times. It’s also evident when you look at the prolonged timeline they operated on when building up to its hotly-anticipated release (no less than five years after debut single Beautiful Broken Bones). All twelve songs locate the perfect balance between their raw beginnings and a relatively polished overall sound, and each moment on the record is filled to the brim with confidence and panache. As debut albums go, you could suggest that Dead! have a world-beater on their hands. The Golden Age of Not Even Trying is out now via Infectious Music.