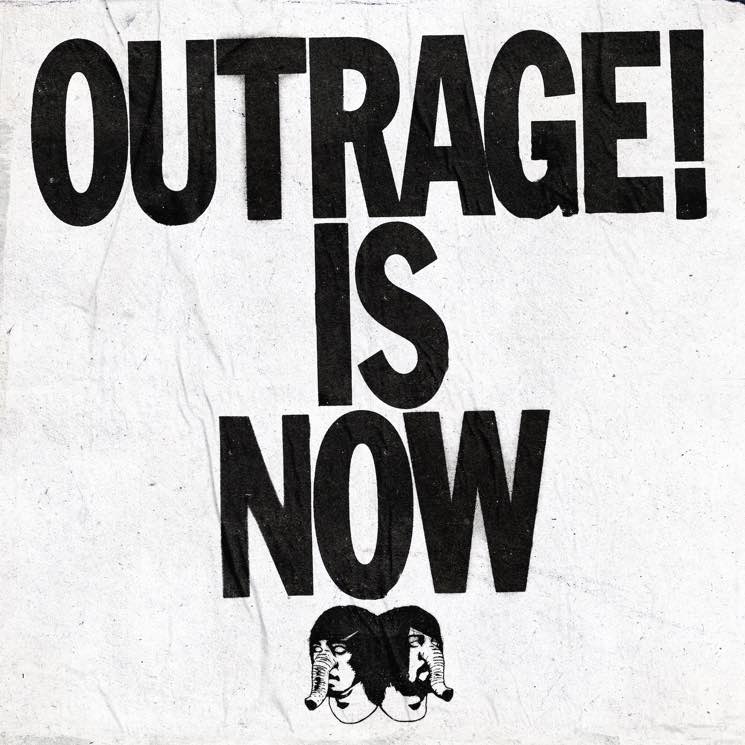 Death From Above Still An Unstoppable Force on Outrage! Is Now

If there’s one thing that seasoned Canadian punk rock duo Death From Above have shown us, it’s that if you want to progress, you have to evolve. Stepping out of their comfort zone, while holding true to the dark, dirty and grindy sound that’s gotten them where they are today, you can tell that something has changed over the years. Death From Above gives us insight into how reshaping yourself as an individual can directly affect the evolution of the creative process. Formed in 2001, vocalist and drummer Sebastien Grainger and bassist Jesse F. Keeler have a long history of tearing up stages together with their infectious dance-punk. Though, after having broken the mould with their destructive debut album You’re A Woman, I’m a Machine, things didn’t go swimmingly for our two rocking Canucks. In August 2006, their fans were met with the grim news that a break-up was inevitable, because the two disagreed with each other on too many levels. Yet, all wasn’t lost, when in 2011 the band decided once again to take up arms and fight their way up to their critically acclaimed 2nd album The Physical World (2014). Having released an album on Warner Bros. Records and a documentary about the band’s history, Jesse and Sebastian found it was time to dive into the studio for their 3rd album, Outrage! Is Now.

Never having gone for the straight-forward, the duo experimented on this album to see how far they could stretch their figurative “pizza dough”, as Jesse calls it. Writing and recording in every unconventional way possible, Death From Above sought to stray from the path of what was and should be, to what could be. Blasting through the speakers, Nomad had me on the edge of my seat, as the build-up to this rocking, dirty powerhouse of a song is inescapable. Tension runs wild as Grainger’s slightly distorted voice lights up this otherwise dark but energetic track. Freeze Me opens up with some frisky piano, and makes way for a groovy, electric medley before presenting us with more dreamy, high-pitched vocals. Freeze Me was the only song to be teased off the new album back in June, together with the announcement that the band were changing their name back to Death From Above. Caught Up slows down into a bold, almost arrogant groove and, having been broken down to the framework instrumentally, this track really gives us the chance to appreciate Grainger’s vocal abilities. Caught Up really has a Royal Blood-like swing to it, and I just had to have it on repeat a few times before hitting the title track of this album. Outrage! Is Now makes a fierce statement on this era’s chaos- and confusion-fuelled, opinion-based conflicts that we see in the news all too often. DFA’s frustrations are outed in a low, humming, grindy bass blast, with what is definitely this album’s most catchy sing-a-long chorus. The tone of this track easily induces a sense of hopelessness about today’s societal situation, something which a band like Muse is usually known to do so well.

Never Swim Alone picks up the pace again with a crisp, electronic sound, cramming as much energy as possible into the album’s shortest song. This brief, distorted-yet-energetic track greatly profits from the electronic elements DFA introduced on this album. The next track on Outrage! Is Now is a musical thriller. Moonlight makes your hairs stand on end, and as this ghastly track ramps up, we start to see why this is DFA’s most personal song. The band refers to the break as ‘the fight scene’ for a reason, as this song was written in response to vocalist Grainger being beaten up by a group of young thugs. Although shaken, he did receive a new perspective on his life, and such an intense experience could only lead to an equally intense song. I was sort of surprised by the next song, Statues, because it showed me a dreamy, psychedelic scene mixed in with the still familiar grittiness of DFA. It’s almost as if the two punkers asked themselves: “Can we make a stoner rock song, but still keep to our own style?” The answer? Totally. It brings with it a track that could only truly be played accompanied by the trippy background of an old Windows Media Player video. When moving on to the next track, I almost immediately had to get up and just dance. All I See is U & Me is a happy, shiny glimmer in an otherwise relatively dark album, and it had me pretty much air guitaring around the room. This catchy, bouncy track is a DFA-styled stab at the high-school-esque 90’s pop punk scene, and it’s a welcome switch indeed. The only thing I dislike about this song: it’s only three minutes long. In an unnerving twist, NVR 4EVR feels dire and raw, and to DFA, this one is very special. The reason for this is that its percussion features the ashes of a deceased long-time fan of the band, who unfortunately passed away after an accident before seeing the band reunite. Grainger explains the intense and moving exchange in an interview, stating that the fan’s sister sought the band out to ask if they could take his memory on tour with them.

Approaching the end of the album, Holy Books is definitely a ‘last but not least’ moment of energetic, aggressive and upbeat punk to send you away on a bang. However, before reaching the end, you realise there’s more to this song. In a dramatic change, Jesse brings out an emotional piano break, which feels almost like a sentimental goodbye, even though DFA isn’t known for their emotional side, and for old times’ sake they rip a hole in your speakers one more time. Outrage! Is Now is an innovative and dynamic piece of work, taking ingredients and elements from many walks of music. It brings us a new, refreshing take on what Death From Above is set to deliver in the future, and with it they’ve kicked off a new chapter in their musical career.

Words by Max Huggett. Outrage! Is Now is available now, and you can stream it here.